28 security officials, 8 civilians killed in PKK attacks during the summer 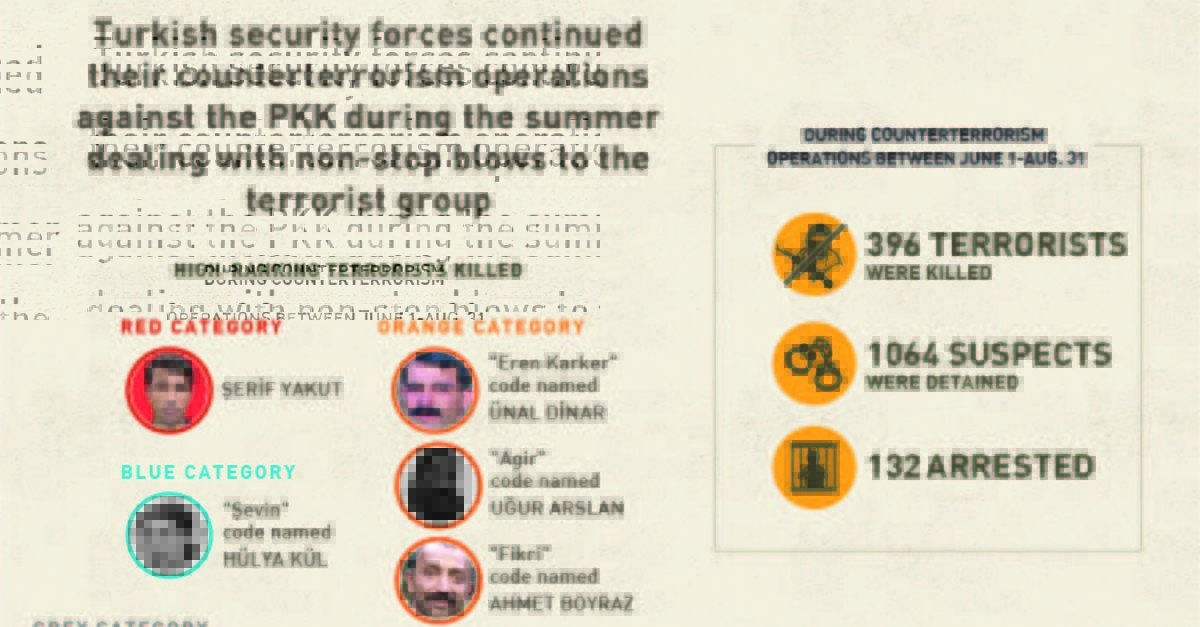 Twenty-eight security officials and eight civilians were killed by the PKK terrorist group between June and August, reports revealed yesterday.

Turkish security forces, however, continue counterterrorism operations in response to the PKK attacks, and to eliminate terrorist threats to national security.

Some 396 terrorists were killed since the beginning of the year in counterterrorism operations against the PKK, Anadolu Agency (AA) reported.

Among them were high-ranking senior figures from the Interior Ministry's Most Wanted List, including Şerif Yakut who was on the red category, Ünal Dinar from the orange category and Hülya Kül from the blue category.

The list is divided into five color-coded categories – with red marking the most wanted, followed by blue, green, orange and gray – depending on the level of threat they pose to national security.

Interior Minister Süleyman Soylu yesterday said the number of PKK members within the country was reduced to less than 600 due to the success of the counterterrorism operations.

"We describe our recent strategy against the PKK as an uninterrupted operation and destroying the threat at its source. This year we conducted 90,513 operations against the PKK. In comparison, this number was 60,733 in all of 2017."

In police operations across the country this year, 1,064 suspects were detained and 132 of them were imprisoned due to their links with the terror group.

Military operations, including Operation Claw in northern Iraq and Operation Kıran in Turkey continue to eliminate the presence of PKK terrorists threatening national security within the country and near its borders.

Turkish security forces regularly conduct counterterrorism operations in eastern and southeastern provinces of Turkey where the PKK has attempted to establish a strong presence. The Turkish Armed Forces (TSK) also carry out cross-border operations in northern Iraq, a region where PKK terrorists have hideouts and bases from which to carry out attacks on Turkey, with particular attention to targeting high-level terrorists.

The operations were intensified after July 2018 and became routine since the beginning of another extensive campaign, Operation Claw, which was launched on May 27 to entirely eliminate the presence of the terrorist organization in northern Iraq. On July 13, TSK launched Operation Claw-2 as a follow up to the successful Claw-1. As the first operation, the second operation was also launched in northern Iraq's Hakurk region and aimed to continue to destroy weapon placements and shelters used by PKK terrorists.

Operation Claw-3, which is the follow up of the previous two was initiated on Aug. 23 in the Sinat-Haftanin region in northern Iraq. The operation was launched to facilitate border security, eliminate the presence of terrorists and destroy terrorist caves and shelters in the region.

The three operations secured an area of 370 kilometers, preventing terrorists from entering Turkey or gaining a foothold in the region.

Hakurk is among the main locations used by the PKK terrorists to infiltrate Turkey or attack Turkish border outposts. The area is located 30 to 40 kilometers south of the Derecik district in southeastern Turkey's Hakkari, bordering Iraq. It currently serves as the main base for the terrorists between Turkey and their headquarters in the Qandil mountains near the border with Iran. Operation Kıran-1 was launched on Aug. 17 by the Interior Ministry against the PKK terrorist organization in Şırnak, Hakkari and Van provinces.

As part of Turkey's intensified counterterrorism operations, Turkish security forces launched Operation Kıran-2, as a follow up of Operation Kıran-1, against PKK terrorists in the southeastern Batman, Şırnak and Mardin provinces.

In its more than 30-year-long terror campaign against Turkey, the PKK, listed as a terrorist organization by Turkey, the U.S. and the EU has been responsible for the deaths of some 40,000 people, including women and children.