US sees Turkey's concerns, yet maintains ties with YPG 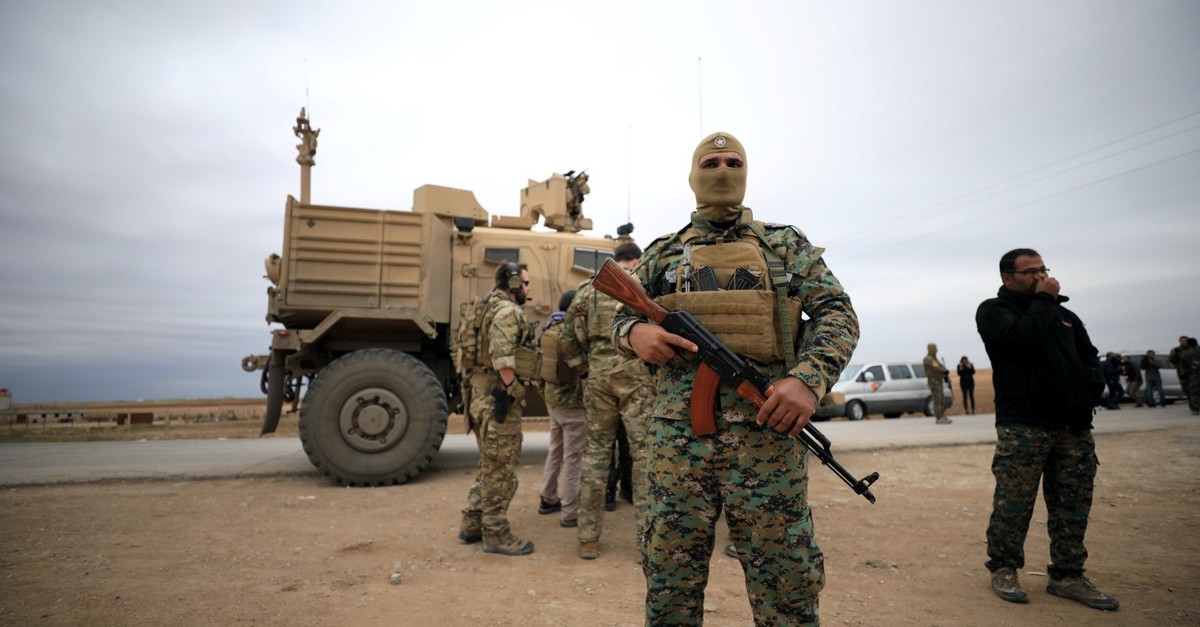 Though Washington finds Ankara's security concerns about the YPG legitimate, it continues to cooperate with the terror group under the pretext of fighting Daesh

Ankara's national security concerns over the presence of PKK-affiliated groups near its borders have been recognized by Washington and the Pentagon, according to U.S. officials, despite it continued close cooperation with the terrorist PKK's Syrian affiliate, the People's Protection Units (YPG). "U.S.-Turkey military air and ground patrols demonstrate our continued commitment to address Turkey's legitimate security concerns while also allowing the coalition and our Syrian Democratic Forces (SDF) partners to remain focused on achieving the enduring defeat of ISIS," Myles B. Caggins, spokesperson of the Combined Joint Task Force-Operation Inherent Resolve (CJTF-OIR), told Daily Sabah Friday.

The Syrian Democratic Forces (SDF) is a YPG-led group with which Washington partnered, purportedly in its fight against Daesh.

On Aug. 7, Turkish and U.S. military officials agreed to set up a safe zone and develop a peace corridor running from the Euphrates to the Iraqi border to facilitate the return of displaced Syrians, currently living in Turkey, to their home country and provide security for the Turkish border settlements and military outposts.

Emphasizing the ongoing joint patrols and coordinated actions with Turkey in the YPG-held areas in northern Syria, Caggins said continued Turkey-U.S. dialogue and coordinated action is "the only way to sustainably secure the border area, ensure campaign continuity in the global coalition's efforts" to defeat Daesh.

However, he clearly stated that Washington opposes any action of Ankara against the YPG, adding that providing border security-related to "limit any uncoordinated military operations that would undermine this shared interest."

A few days ago, President Recep Tayyip Erdoğan said the upcoming months would be indicative of whether the Syrian crisis will be resolved in peace or whether it will deepen. The president reiterated once again that Ankara will initiate its plans within two weeks if the ongoing safe zone plans and implementation with the U.S. in northern Syria prove unfruitful.

The U.S. has provided military training and given truckloads of military support to the YPG, despite its NATO ally's security concerns. Despite claiming numerous times that Daesh has been defeated, the U.S. support of the YPG still continues.

Speaking on the joint mechanism Thursday, Defense Minister Hulusi Akar said joint operations between Turkey and the U.S. for the planned safe zone in northern Syria will end if Washington stalls the process.

Akar said the joint operations will continue as long as they align with Turkey's interests and aims.

"We have completed our preparations. If necessary, we will take the matter into our own hands just as the president [Erdoğan] has said before. Our plan B and C are ready," he said.

The minister once again reiterated that Turkey respected Syria's sovereignty and territorial integrity.

"No one should doubt it, but we will also not allow any terror corridor to form right next to our borders. Our end goal is to remove the PKK and YPG elements from northern Syria and establish a peace corridor, enabling our Syrian guests to return to their homeland," he said.

The agreement between Turkey and the U.S. envisaged setting up necessary security measures to address Turkey's security concerns, including clearing the zone of the PKK and YPG. The U.S. has supported the YPG in the fight against Daesh, regardless of objections from Turkey.

However, the two countries are still at odds on how deep the safe zone will extend into Syrian territory and whether large cities and towns in the area will be cleared of the YPG.

Experts on a panel in the U.S. drew attention to the fact that Washington's cooperative attitude toward the YPG is unacceptable for Ankara.

Speaking at a panel organized by Turkey's Directorate of Communications and hosted by the Foreign Policy Association, professor Gülnur Aybet, counselor of the Presidency, said the process for a security mechanism has been progressing slowly, criticizing Washington of equalizing Turkey and the YPG.

Another speaker, professor Mehmet Akif Kireçci, a member of Turkey's Security and Foreign Policy Council, said Turkey shares a 900-kilometer border with Syria and is subjected to threats by the PKK terrorist organization.

On Thursday, Brig. Gen. Scott Naumann, director of operations of the Combined Joint Task Force-Operation Inherent Resolve (CJTF-OIR), told Daily Sabah that Washington's support for the SDF continues "despite [Daesh] not being able to hold any territory to govern." The U.S. has primarily partnered with the YPG in northeastern Syria in the anti-Daesh fight. Turkey strongly opposes the YPG's presence in northern Syria, which has been a major sticking point in strained Turkey-U.S. relations. The U.S. has provided military training and given truckloads of military support to the YPG, despite its NATO ally's security concerns.

To reduce tensions, Turkey and the U.S. agreed on a road map in June 2018, foreseeing the withdrawal of the YPG from Manbij and installing joint Turkish-American patrols, which began last November.

However, the process has been sluggish as the terrorist group was still present in the city despite the three-month timetable set for implementing the deal. Turkey expects the creation of a 32-kilometer safe zone in northern Syria, which must be cleared of YPG terrorists. Ankara has warned that if the establishment of such a zone is delayed, it will take cross-border military action to remove the terrorist threat on its southern border. Turkey previously conducted two offensives into Syria, against Daesh and the YPG, in 2016 and 2018.

Meanwhile, Turkey's Health Ministry requested Friday medical workers to enroll for a month of mandatory service as part of the army's planned operation in Syria. Reportedly, the doctors will be deployed to the border provinces with Syria to carry out health services as part of the Turkish Armed Forces' (TSK) planned cross-border operation, which is expected in two weeks.

Operation Euphrates Shield and Operation Olive Branch liberated the region from the YPG, PKK and Daesh terrorists, allowing hundreds of thousands of displaced civilians to return to their homes.

The YPG is the Syrian offshoot of the PKK terror group, which has been responsible for the deaths of nearly 40,000 people in Turkey, including women and children, over the past 30 years.