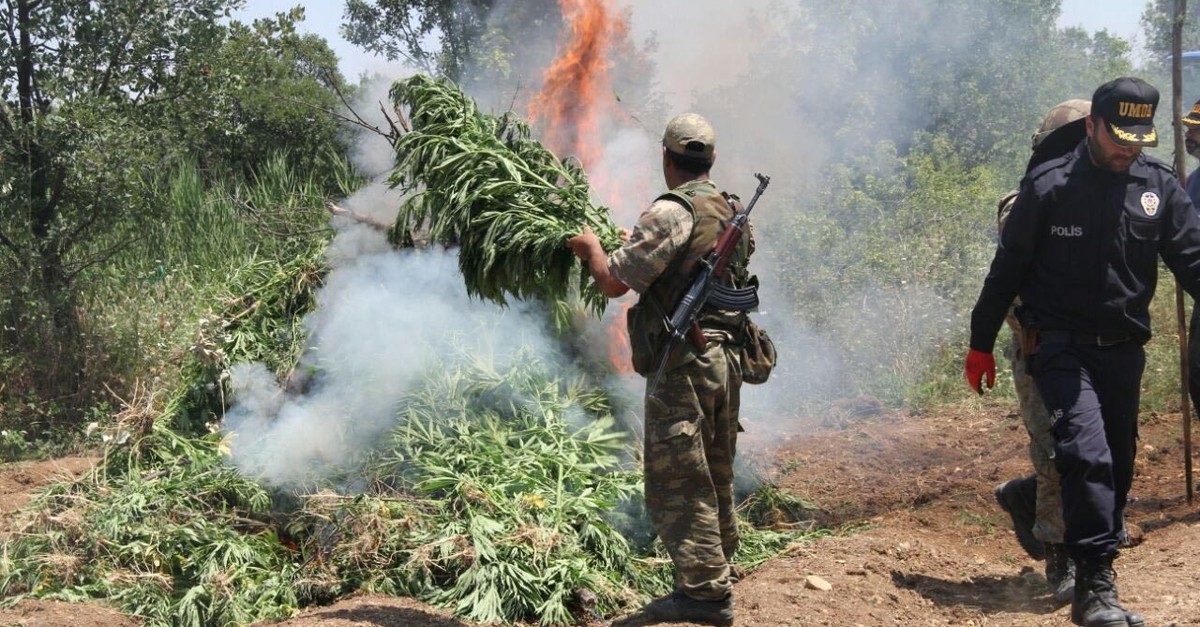 Security forces conduct operations to destroy illegal drugs that are used by the PKK terror group as one of its main sources of revenue.
by Şeyma Nazlı Gürbüz Sep 23, 2019 12:00 am

While the PKK uses drug trafficking as its main source of finance, it also exploits drug addiction to abduct young people and convince them to commit terrorism activities

"My daughter is alive. She is in Syria now. I've become ill because of my sorrow. My heart has been smashed into pieces. I will wait until my daughter comes," said a mother, Husniye Kaya, who said that her daughter, 19-year-old Mekiye, had been drugged and forced to join the PKK terrorist organization and its Syrian affiliate, the People's Protection Units (YPG). These words came two weeks ago from a mother who has been staging a protest in southeastern Diyarbakır province to get her child back. With tears in her eyes, she revived an overshadowed but well-known subject: the PKK's drug trafficking and its use in child abduction.

It has been known for a while now that drug dealing is one of the main resources of the PKK terrorist group, which has been going on for decades, with a route from the Middle East to Syria. Back in January, the interior minister said that the terrorist group earns $1.5 billion annually from drugs.

"The revenue the PKK earns from drugs annually is $1.5 billion… The PKK is an organization [involved in] human smuggling and drug trafficking. Even the U.S. has confessed this reality in official reports," Interior Minister Süleyman Soylu said at the Fight With Narcotic Crimes Evaluation Meeting in southern Antalya province. Soylu said terror and drugs support each other.

"Terror opens space for drugs and provides logistical facilities for it. Drugs, on the other hand, finance terror," he said. The interior minister said the 28 members of the EU seized 4.27 tons of heroin in 2016. "The amount we [Turkey] seized alone in 2017 was 15 tons and 17.9 tons in 2018," the interior minister added.

Although these numbers were quite clear in terms of understanding the issue, the mothers' sorrows of losing their children brought the subject to another level, showing that it was more than numbers that cause harm to people's lives when it comes to the PKK and its drugs.

Last week, a PKK terrorist who surrendered to authorities in eastern Van province made substantial confessions on the issue, revealing the terrorist group's dark methods of recruiting children. Indicating that children under the age of 18 have been tricked into getting close to the PKK and becoming addicted to drugs, the terrorist said that in the aftermath of this process, the children were faced with harassment and used as human shields in terrorist attacks.

According to Can Acun, who previously spoke to Anadolu Agency (AA) on the topic, there are two ways that the PKK benefits from drugs. "They get revenue from it in trade and also give those drugs to militants as 'courage-giving' pills and use them as a tool to convince people to commit terrorist crimes," Acun said, adding that it is commonly known that underage children have been drugged by the PKK to participate in terrorist actions as if it were a reward mechanism.

It is not a new phenomenon to see that the PKK, as most other terrorist groups in the world, gets most of its revenue from drug trafficking. Aware of this, Turkish authorities have been confiscating narcotics shipments and drug labs owned or operated by the PKK since the 1980s.

"Drug [trafficking] is a crime against humanity. However, some of our organization representatives may have received money from drug smugglers as 'donations.' This is also the case in Europe. A large number of our members might be established in the European drug trade," said Öcalan.

Previously, in testimony to security forces, six PKK terrorists captured in an operation in southeast Turkey confessed that the PKK had a 20% share of cultivated marijuana.

During operations that took place in 2016 and 2017 in Diyarbakir, 201.6 tons of marijuana and 81.4 million marijuana plant roots were seized by security forces.

The PKK also conducts business in Syria. In July 2018, during Operation Euphrates Shield to liberate northwestern Syria from the YPG, security forces stopped a vehicle en route from Manbij to Turkey and found 2 million drug pills in 20 packs inside, while during Operation Olive Branch launched by the Turkish Armed Forces in January 2018 in Afrin, security forces found concrete tunnels that the PKK used to smuggle drugs into Turkey.

According to security forces, the group's main drug trafficking activities transferred to Manbij after its defeat in Afrin.

According to a recent report released by the Foundation for Political, Economic and Social Research (SETA), since the YPG controls many fertile fields in Syria, it has the potential to generate more than $1 billion in income just from the agricultural sector. "In addition, the YPG earns significant income from raw drug materials on arable lands. The YPG increased consumption of drugs in the region, a development facilitated by local production," it says, adding that the cheapness of the drugs makes it more available for everyone. "The cheap and free circulation of drugs and pills is becoming increasingly common as a result of the psychological traumas inflicted in war zones," the report underlines.

The terrorist group's links with drug smugglers in various European countries were also explored in a report prepared by [Turkish] Parliament's Drug Addiction Research Commission following the commission's contacts in the U.K. and Germany.

The report praised anti-narcotic operations carried out in Turkey that it said forced drug traffickers to seek alternative routes. In September 2017, operations in Austria and Belgium led to the collapse of one of the PKK's drug networks in Europe, revealing that the network in Belgium was used to push illicit drugs to half of Europe and transfer drug money back to the group. According to the German Chief Public Prosecutor's Office, the PKK has seized control of 80% of drugs in Europe.

In the opinion of Istanbul Chief of Police Mustafa Çalışkan, who released an article on the issue last week, the power of the PKK in drug trafficking was weakened in 2018, reducing the group's control: While 93% of drugs entering Europe were controlled by the PKK, this percentage was reduced to 50% in 2018.

Despite the reduction of drug dealing activities supported by the data, the recent mothers' protests have shown that the PKK's key source of revenue continues to terrorize children and bring sorrow and misery to families.