On 22nd day, Kurdish mothers continue to demand children back from PKK 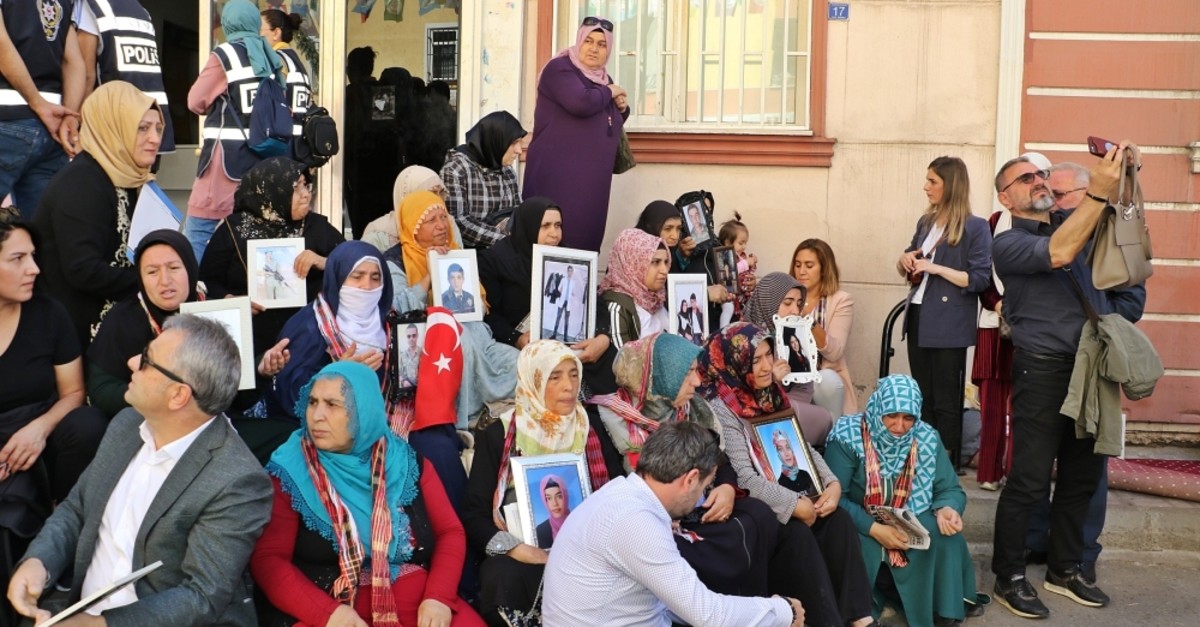 A sit-in protest launched in front of the Peoples' Democratic Party's (HDP) Diyarbaku0131r provincial headquarters by mothers whose children were kidnapped by the terrorist group has been going on since the first week of September, Sept. 24, 2019.
by Daily Sabah Sep 25, 2019 12:46 am

A sit-in protest by Kurdish mothers in front of the pro-PKK Peoples' Democratic Party (HDP) headquarters in southeastern Diyarbakır province has entered its 22nd day, with more and more mothers and families joining the protest to demand the return of their children abducted by the terrorist group. Hurinaz Omay, 82, is the oldest mother present at the protest asking for the return of her son Rifat, who was kidnapped by the PKK 24 years ago, when he was 25. "They took my son when there was a conflict in the village and never released him again. After that, I never saw my son ever again. I could not get any information about him, whether he is alive or dead. I've tried a lot but could not learn anything," said Omay, with tears in her eyes.

Speaking to Anadolu Agency (AA), Omay, who came from southeastern Bitlis province, said she went to Qandil and the Mahmur mountains twice where PKK terrorists are present but could not manage to get any information.

"I want my son. They will give my son back one way or another. If they killed him, they will give me his funeral. If he is alive, let him come back to me," the sorrowful mother said, expressing her determination to get her son back. She said the HDP does not represent Kurds but instead tricks Kurdish children into joining the terrorist group.

The HDP, long facing public reaction and judicial probes over its ties to the PKK, is under pressure due to this growing civilian protest movement launched by the mothers and local families.

The sit-in has been on going since Sept. 3 with the number of families reaching 50, including five Iranian families whose children were abducted by the PKK's Iranian wing, the Kurdistan Free Life Party (PJAK).

Initially, a lone protest was started by mother Hacire Akar in front of the HDP provincial organization in Diyarbakır last month. Akar wanted to see the return of her 21-year-old son Mehmet Akar, who had been missing for three days after he was abducted by the PKK terrorist group. Following her sit-in, and with the help of security forces in Diyarbakır, Akar was finally reunited with her son. Omay's words reflected those of other Kurdish mothers protesting, all of whom are only demanding the return of their long-lost children with the fear of losing them for forever.

"They have gotten into my child's brain. They took her away," said Hatice Levent, whose daughter Fadime was abducted four years ago when she was only an 18-year-old college student in Bitlis.

Stating that she knocked on every possible door to find her daughter, Levent said she wants to find her child alive.

"I want my child. I want my child alive. When I first went to Bitlis, my daughter's friends told me that Fadime was brought to the mountains. My child had a heart disease. We do not have anything to do with politics. We did not raise our child for them [the PKK]. We have raised her with a lot of difficulties," she said.

Joining the protest from Muş province, İkram Gürtürk is another mother whose son was kidnapped five years ago when he was a senior in high school. Expressing her remorse in Kurdish, Gürtürk said both she and her husband have been suffering from serious illnesses and that losing their child adds to their pain.

"We want our son. We demand help. If our son sees us, come back. Stop the sorrow of all the mothers. One cannot endure the lack of her child," she said, adding that she cannot take it anymore.

The mothers, despite being the initial organizers of the protest, are not the only ones demanding their children, as fathers like Halit Altun from Muş province are also present in front of the HDP headquarters. Altun, whose son was tricked into joining the PKK four years ago while studying computer engineering in college, said he is looking forward to reuniting with his son after all these years. "I have eight children, one of them is a soldier in Ankara," he added, pointing out the complex situation the family is in. Learning through his own research that his son was brought to Kobane province, Altun said whenever he goes somewhere to find his son, the PKK keeps directing him to another place.

Families are accusing the party's leaders of sacrificing regular people's children while providing luxurious lives for their own kids. "They kidnapped my children to the mountains, while their children have a l

uxurious life in France," said Celil Begdaş, who asserted that his 17-year-old son Yusuf was brought to the PKK with the assistance of the HDP. Begdaş showed photos of party Co-chair Pervin Buldan's son in a luxury car in Paris. Another photo showed Buldan's daughter sitting in a cafe in London. Previously, photos of Buldan's son, Neçirvan, showed him resting near a villa swimming pool.

Meanwhile, various groups from all around Turkey have supported the Kurdish mothers in their cause, with many paying visits to show their support. The latest visit came from northeastern Trabzon province as 10 mothers, three of whom are mothers of martyrs, went to Diyarbakır on Monday.

Gülşen Özcan, mother of Kadir Miraç Özcan, who was killed in 2017 in a PKK attack, said that since the first time she saw the struggle of Kurdish mothers, she wanted to come to support them.

"This is a national service. My biggest desire is for the mothers of martyrs and Kurdish mothers who stage protests to act together. To have a huge rally in Diyarbakır's square together. If the state organizes this, I believe that the mothers will overcome this problem," she said, underlining that the PKK problem can only be solved through the strong stance of mothers.

Similar events have taken place previously and have continued since the PKK started its more than 30-year terror campaign against Turkey. The terrorist organization is responsible for the deaths of some 40,000 people, including women, children and infants.

In 2011, families whose children were kidnapped by the PKK terrorist organization also gathered for a sit-in protest in Diyarbakır to express their frustration with HDP officials.