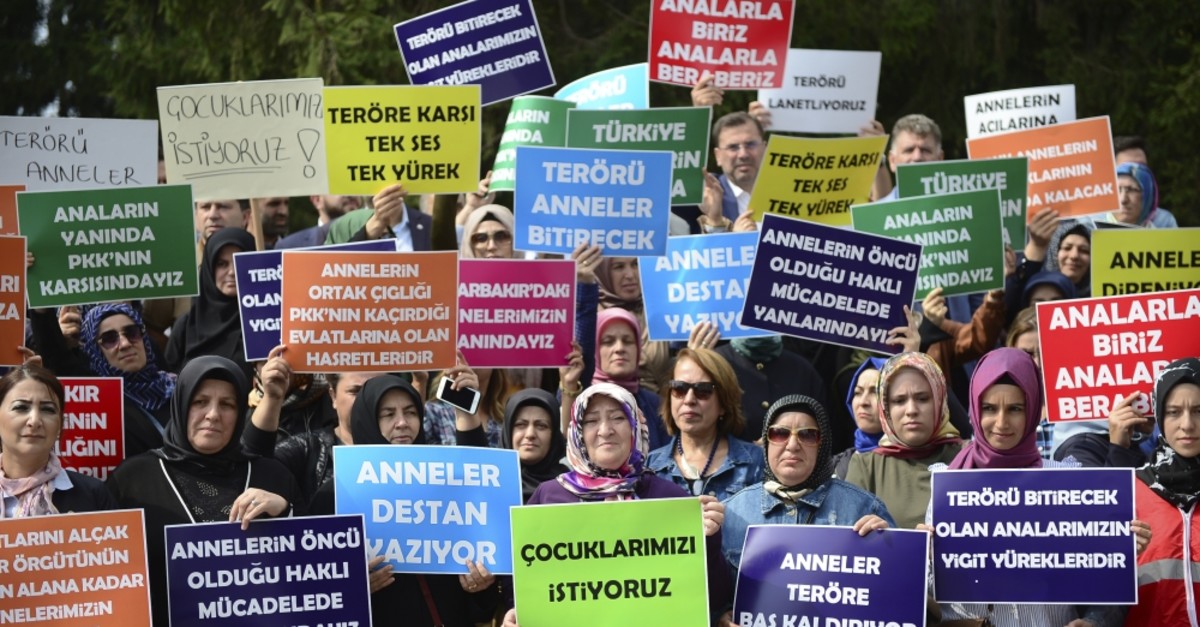 Nongovernmental organizations (NGOs) and their women representatives have backed the Kurdish mothers carrying out a sit-in against the PKK and the pro-PKK Peoples' Democratic Party (HDP), demanding the return of their children from the hands of the terrorist group. Kerime Kurt, who read a joint press release in the name of the NGOs said the struggle of the women shows the type of strength that is going to hurt terrorism the most. She said women representatives of different NGOs gathered in Turkey's 81 provinces at the same time to support the honorable struggle of the mothers. "The resistance of Diyarbakır mothers and their defiance against terrorism will go down in history. Those who have taken every risk, including being politically or socially isolated, will be successful in achieving their goals and preventing further tragedies," she said.

"The mothers and women from all across Turkey are united. We say that motherly pain has no etiquette. We invite the local, national and international community to remain by the side of the mothers in Diyarbakır," Kurt added.

Some 70 female nongovermental organization (NGO) members gathered in northern Samsun in front of a museum with banners in their hands. Emel Öztürk, a woman living in Samsun but who is from Diyarbakır, also mentioned her own experience saying, "In the past my nephew was abducted forcefully. After a period of time, his corpse was sent to us. Therefore, I support the just protest of the mothers."

Similarly, nearly 20 NGO members, most of whom were women, came together at the July 15 Independence Square in Çorum to support the sit-in. The echoes of the people's support for the mothers in Diyarbakır were heard from every corner. Reading out the joint press release in Çankırı, Eğitim Bir-Sen Women's branches Deputy President Hatice Demir said "The blood of our martyrs sacrificed for our nation and our tears for our lost children are still fresh. A further milestone to our struggle has been put by mother Hacire. We have seen that the heart of a mother can put an end to all the pains, tears and death of young people."

The protests had started with Hacire Akar, who staged a sit-in in front of the HDP's headquarters, demanding the return of her 21-year-old son. It took three days for Akar to reach her son, unlike many others who joined later and continues to protest.

The sit-in has been going on since Sept. 3 with the number of families reaching 50, including five Iranian families whose children were abducted by the PKK's Iranian wing, the Kurdistan Free Life Party (PJAK). In several provinces, women shouted slogans, like "Mothers are resisting" and "Mothers will end terrorism." They held press conferences to support the ongoing sit-in. "The silent cry of mothers in Diyarbakır has continued for 23 days now. It has evolved into a stark voice saying 'stop' to terrorism around the world," said Şerife Atak, an NGO representative from southeastern Turkey's Şırnak.

The HDP has long faced public reaction and judicial probes over its ties to the PKK. It is under pressure due to this growing civilian protest movement launched by mothers and local families. The party is being accused of aiding the PKK in recruiting new militants through its provincial and district organization as well as the municipalities. Meanwhile, NGO representatives and women who gathered in Adana condemned the terrorist attack that hit the city Wednesday morning.