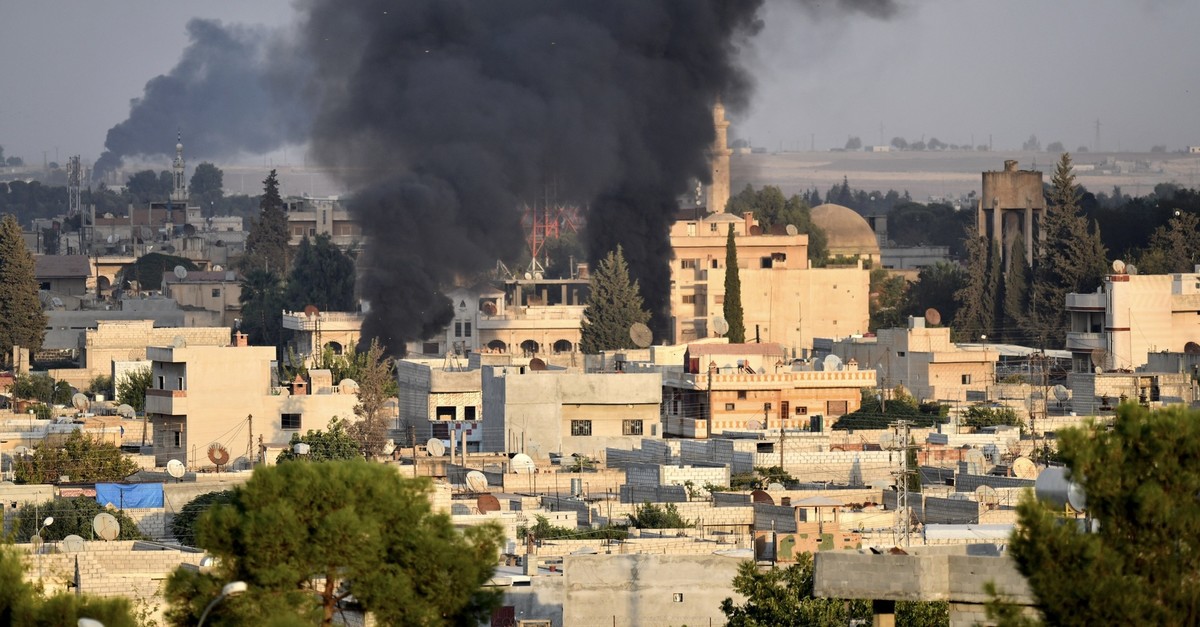 Turkey has launched Operation Peace Spring in northeastern Syria against terrorist elements in the region, particularly the PKK's Syrian affiliate, the People's Protection Units (YPG), and Daesh, President Recep Tayyip Erdoğan announced Wednesday. "The Turkish Armed Forces launched #OperationPeaceSpring alongside the Syrian National Army (SNA) yesterday against the PKK/YPG and Daesh terrorist groups in northern Syria. Our aim is to eliminate the terrorist corridor that is aimed to be established at our southern border and to bring peace to the region," Erdoğan said from his social media account yesterday. The president further underlined that thanks to the safe zone that is planned to be established in the aftermath of the operation, Syrian refugees will be able to return to their home country and Syria's territorial integrity will be preserved.

The first attacks took place in Ras al-Ayn province of northeastern Syria, where YPG bases were targeted. The news of the operation came two days after the president's phone conversation with his U.S. counterpart President Donald Trump, in which the former informed the latter over Turkey's intentions for an offensive. The initial plans for an operation east of the Euphrates have been on the agenda of Turkish authorities for quite some time now, long before talking with Trump, as the threat from the YPG continues to grow in the region, posing a national security threat to Turkey. The YPG has been receiving U.S. backing under the pretext of fighting Daesh, although Ankara has been objecting to Washington's stance, saying that using one terror group to fight another makes no sense.

With increasing U.S. weapons and material support, YPG terrorists have tightened their grip on northern and eastern Syrian territories, with the ultimate aim of establishing an autonomous region in northern Syria by connecting the northwestern Afrin canton to the Ayn al-Arab (also referred to as Kobani) and Jazeera cantons in the northeast, posing a threat to Turkey's border security. 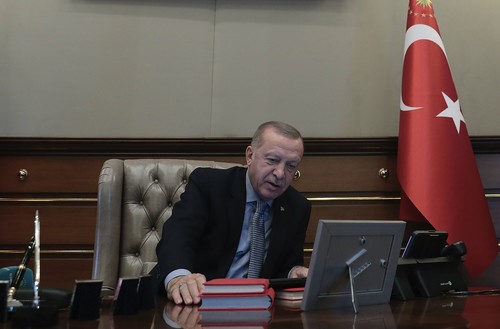 President Recep Tayyip Erdoğan speaks on the phone with Defense Minister Hulusi Akar before reportedly giving orders for the start of the military operation in Syria, Ankara, Oct. 9, 2019.

Ankara has so far answered this threat with two cross-border military operations to put an end to the group's autonomy plans, which Turkey calls a "terror corridor."

Turkish officials had long been signaling a military campaign into much larger YPG territory east of the Euphrates if the threat continued.

Explaining the offensive, its aims and nature, Erdoğan said on his return way from Serbia on Tuesday that there are three main points of this operation: to create a peace corridor in the region instead of a terror corridor, which later will turn into a safe zone; secure the territorial integrity of Syria; and enable displaced Syrians to return home.

"It is our duty to provide security to our people living along the border. This is why we are taking this step," the president underlined.

Pointing at disinformation circulating on media outlets regarding the operation, Erdoğan corrected some claims such as the one that suggests Turkey would like to change the demographic structure in the region.

"Turkey does not have such a concern. If we had such a concern, we would make it real in al-Bab, Jarablus and Afrin," the president said, referring to the previous operations by the country.

"The one that changes the demographic structure are the PKK, YPG and Daesh," Erdoğan underlined.

Highlighting that Ankara has no problems with the Kurds, Erdoğan emphasized once again the offensive only targets terrorist groups, not civilians.

"Another point is that we are fighting a terrorist group that kills and oppresses Kurds. This is very important. It is not us who struggles against Kurds and kills them. It is the YPG that does all these things. We will fight against them," the president said, adding that the brutalities of the terrorist group have been reported by international human rights organizations.

According to Ankara's plans, it is a must for Syrian refugees to return home, planned to be achieved by the establishment of a safe zone as an outcome of the offensive.

"If we would be able to have a meeting with the funders, or if the [international community] would be able to provide monetary support, there would be the option of making buildings in these areas and resettle people there," the president said on the issue.

He said that projects for this aim have already have been prepared. "I've presented our works on the issue to the leaders that I've met at the U.N. summit, told them what we are planning to do in the peace corridor, safe zone," he said, indicating that he called those states to support the operation. "Although they all welcomed the plan, they did not take any action for it. So, we will no longer tolerate waiting around," Erdoğan said.

Trump made the right decision over safe zone

When it came to his phone call with Trump, Erdoğan said that although the two leaders have previously spoken on the issue of U.S. troops withdrawing from the area, there have never been concrete steps taken on the matter, until now.

"We don't want to come face to face with U.S. troops [in Syria, during the offensive]," the president expressed.

Trump has been facing mounting pressure in Washington after the White House announced late Sunday that the U.S. would pull back its forces in Syria ahead of a "long-planned" Turkish operation. U.S. military forces began pulling out from the area on Monday hours after the White House's withdrawal announcement.

The Trump administration has ruled out any U.S. support for the operation, and in the face of significant pushback, the president, in a drastic change of tone, vowed "if Turkey does anything that I, in my great and unmatched wisdom, consider to be off-limits, I will totally destroy and obliterate the economy of Turkey." However, he also defended Turkey and its close relationship with the U.S., saying he had a "very good relationship" with Erdoğan.

"Some claim that YPG is the ally of the U.S. How a Marxist/Leninist group is able to be a friend of the U.S. is impossible to understand. Since our childhood, we have always known that the U.S. has been against communism. How it can cooperate with it now is impossible to understand," Erdoğan stated regarding the U.S.' support of the YPG. Erdoğan's surprise came following Trump's recent speech at the latest U.N. summit, where he criticized socialism and communism harshly.

Underlining that Trump has made the "right" decision when it comes to the safe zone, Erdoğan said that despite the president's stance, the U.S. army and security bureaucracy refuse to obey their president's orders.

"Politicians and media try to put pressure on Trump. And he is being forced to release some messages on Twitter in order to ease this pressure," Erdoğan underscored, adding that as some U.S. troops have already left the area shows the real intention of Trump.

When it comes to the dispute over air space, Erdoğan said that since the U.S. does not have air space there, it does not have any say on the issue. "That air space belongs to Syria. They [the U.S.] are not there with the invitation of the regime. We are there due to the Adana Agreement. According to the Adana Agreement, if the regime does not take any measures against the PKK, our forces have the right to handle the issue themselves," the president expressed.

Erdoğan further touched upon Turkey's fight against Daesh, which is, in his words, "unique in the world."

"There is no other country that fights Daesh in Syria like Turkey. We showed this clearly in al-Bab," the president said. "I suspect the good intentions of those who try to present Turkey, which continues to fight Daesh with determination, as though it doesn't fight the terrorist group at all," he underlined, indicating that the formation of the safe zone will not debilitate the struggle against Daesh. He also added that Ankara's work regarding imprisoned Daesh terrorists continues.

During the phone call three days ago, the two leaders also agreed that Turkey would undertake the responsibility of fighting Daesh in the region from now on.

Graham is not speaking the truth

The president also criticized U.S. Republican Senator and a known Trump supporter Lindsay Graham for being "dishonest," following his unexpected statements over the Turkish offensive.

"This gentleman [Graham] is not an honest man. Because he demanded to meet with me in the U.N. summit and we have met. In these meetings, I had an impression. I even met with him in the

Presidential Complex when he came to Turkey. I told him that our struggle is against the YPG," the president said.

"These people [like Graham] do not have any idea about many things. They don't know about the terrorists and the tunnels. When he returned, he gave some remarks saying that these [YPG] are terrorists and have no relation with the Kurds. Now, he made some weird statements, putting Trump into a difficult situation," he further added. Graham defined Trump's move as a "shot in the arm to the bad guys." Speaking to Fox News, Graham said letting Turkey conduct an operation in the region "would be a mistake of historic proportion," threatening the country's NATO membership.

Graham's statements were regarded as "unexpected" by many as he was known for his pro-Turkey stance. He also addressed a tweet to the Turkish government saying, "You do NOT have a green light to enter into northern Syria. There is massive bipartisan opposition in Congress, which you should see as a red line you should not cross."

Erdoğan, meanwhile, expressed his happiness on seeing all segments of Turkish society united against terrorism and for welcoming this operation. He added that the government will look to strengthen Turkey-U.S. ties even further in the upcoming period.