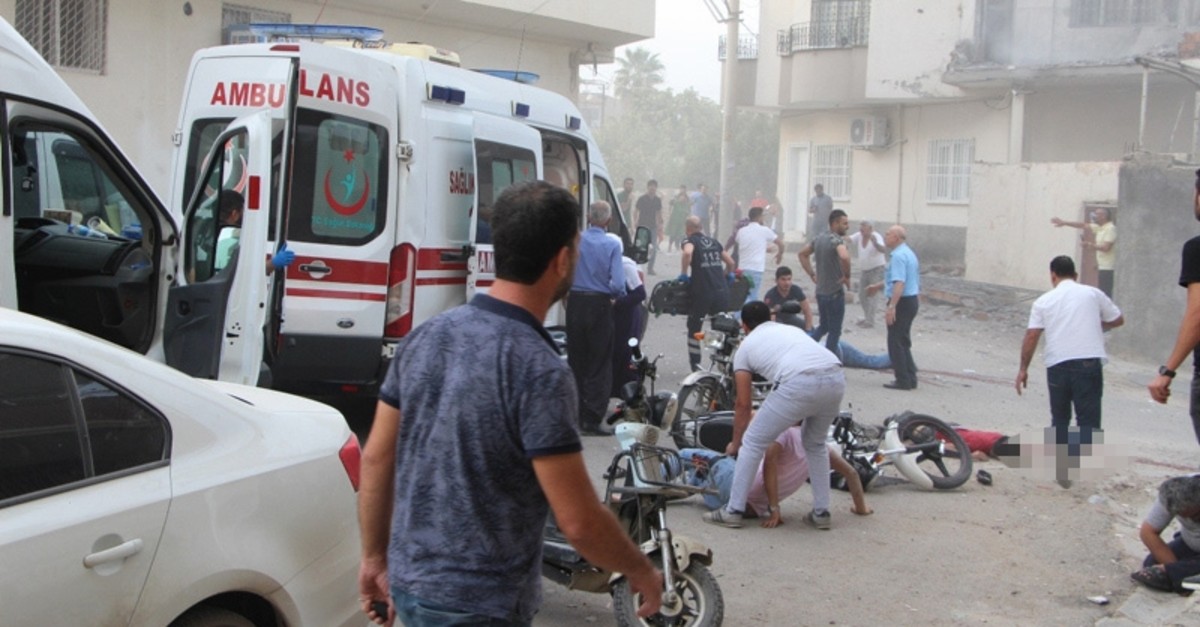 A total of 10 civilians have been killed and dozens more wounded in mortar attacks launched by the People's Protection Units (YPG) on civilian areas in southeastern Turkey's Mardin and Şanlıurfa provinces on Friday.

In a single attack on the Nusaybin district of southeastern Turkey's Mardin, the PKK's Syrian offshoot YPG killed eight civilians and wounded at least 35 others on Friday evening, the local governor's office said.

YPG terrorists have fired dozens of mortars into Turkish border towns since the start of Turkey's Operation Peace Spring in northeast Syria on Oct. 9. With the latest attack, the civilian death toll from YPG attacks has reached nine.

The attack came just hours after two journalists were injured YPG terrorists after they opened fire on a restaurant in Nusaybin, in southeastern Turkey's Mardin province near the Syrian border.

The attack also comes a day after three people, including a 9-month-old baby and an 11-year-old girl, were killed and 46 civilians were injured in mortar attacks in Şanlıurfa. In the Nusaybin district of Mardin, a mother and her two teenage daughters were also killed Thursday and 24 people were injured in attacks by the YPG.

Earlier in the day, the National Defense Ministry also announced the first military fatality since the operation was launched. It said a Turkish soldier was killed in clashes with the YPG on Oct. 10. The fallen soldier was identified as Ahmet Topçu. The ministry later announced that another Turkish soldier, Hacı Bebek, had been killed in clashes with YPG terrorists on Oct. 11.

Meanwhile, at least four Syrian National Army (SNA) members were also killed in an ambush by YPG terrorists, according to SNA sources.

According to the sources, terrorists masquerading as fellow fighters ambushed the SNA forces and took villagers hostage in Dadat village in the district of Tal Abyad.

Entering the village to take security precautions, the SNA fighters were attacked by YPG/PKK terrorists. SNA forces initially retreated but later re-entered the village, clearing it of terrorists.

The newly launched anti-terror operation has so far liberated 12 villages in Tal Abyad town and Ras al-Ayn city from terrorists on Thursday.

The SNA forces — composed of various opposition groups fighting against the Bashar Assad regime of Syria— entered the areas occupied by the YPG/PKK terrorists as part of the Turkey's fresh anti-terror operation.

While the country liberated northwestern territories from Daesh in its first two operations, it also prevented the YPG from establishing a de facto autonomous region in Syria connecting the northwestern Afrin canton to the Kobani and Jazeera cantons in the northeast, which Ankara describes a "terror corridor" posing a grave threat to its national security.