US has to work with Turkey 'on their terms' in Syria, ditch terror group YPG, expert says 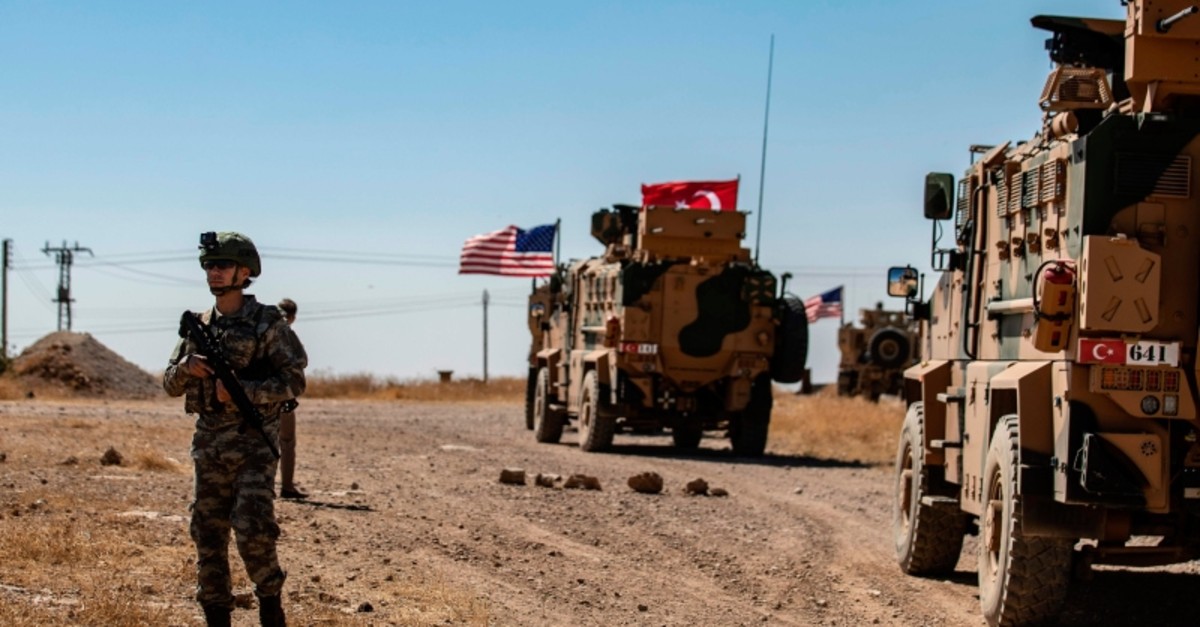 A US soldier stands guard during a joint patrol with Turkish troops in the Syrian village of al-Hashisha on the outskirts of Tal Abyad town along the border with Turkish troops, on September 8, 2019. (AFP Photo)
by Anadolu Agency Oct 15, 2019 10:39 pm

The United States has to work with Turkey on their terms in northern Syria, a senior Hudson Institute fellow said Tuesday.

Speaking at a panel, Michael Doran said Washington, by allying with the PKK terror organization, set itself on a collusion course with Ankara, calling it "unwise."

"Everyone knows we [the U.S.] are leaving sooner or later. Turkey is gonna be there forever. We have to work through them largely on their terms," said Doran.

"We can have our humanitarian concerns, we can force them aggressively, we can have differences of opinions but it has to be within a Turkish framework rather than some framework we made up as a result of different positions we ended up and as a result of temporary tactical decision we made," he added.

Doran said the U.S. played a major role in the deterioration of relations with Ankara, adding that "Getting out of it means we need to reestablish good ties with Ankara."

Turkey has repeatedly told the U.S. that its support for the Syrian Democratic Forces (SDF), which is dominated by the PKK-affiliated People's Protection Units (YPG), is paving the way for the group to build a terror state in northeastern Syria.

"We rebranded the PKK as the SDF, and brought in Arab and Yazidis. But the power center of that organization always was the PKK. We should recognize that we lied to ourselves.

"[The] Obama administration packaged this as something other than the PKK," he added.

Doran also said the U.S. is ditching a major ally, that sits between Europe and Asia, and where U.S. has basis and intelligence platforms and called Turkey an ally the U.S. works with in Bosnia and Afghanistan.

"We are gonna ditch that state [Turkey] for a splinter group, extremist terrorist organization. That does not even represent even Kurds. The PKK is not Kurds," he added.

"We elevated a little splinter extremist organization of a minority and put it on the same level as our ally and began mediating back and forth and representing to Turkey the position of the PKK," he said.

He said the PKK/YPG rejected any power sharing in their area and hate even the Kurdish Regional Government in northern Iraq. "These guys, the YPG, they would rather be in bed with [Bashar] Assad and the Iranians than with the Kurds of Iraq."

Doran accused the terror group of aligning itself with the Russians and Iranians, soon after the Washington's withdrawal in the region.

"We borrowed a Russian and Iranian proxy, and it was strategically stupid," he added.