Sanction threats will not force Turkey to stop its op in Syria, Presidential Spox says 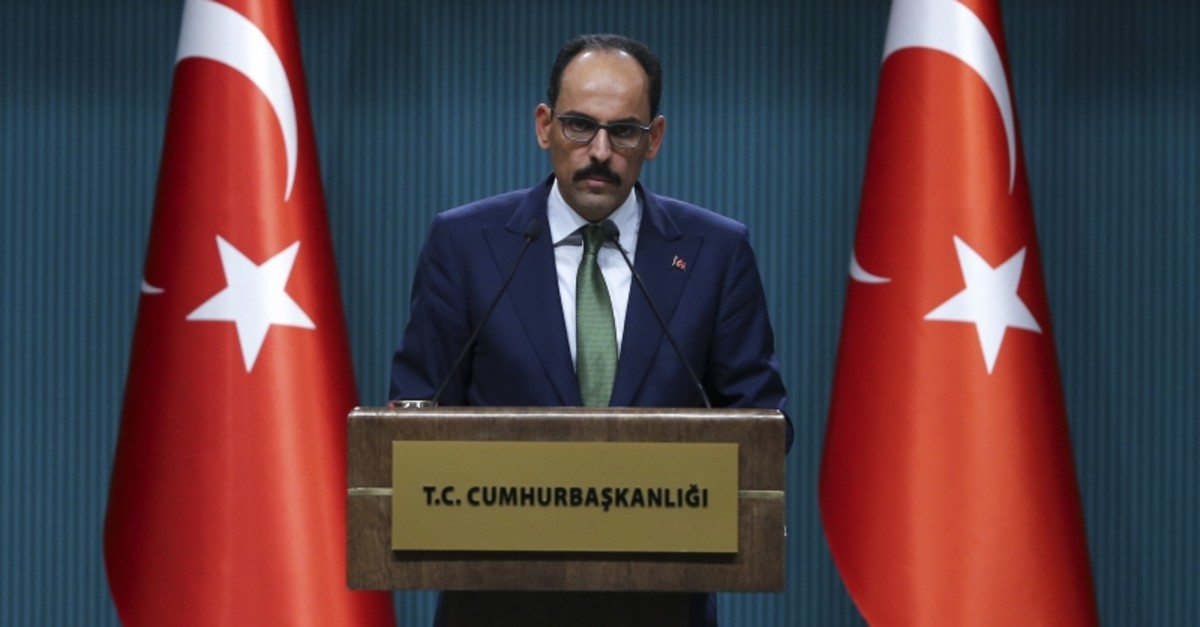 "Neither sanction threats nor condemnations can deter us from our rightful cause," Kalın told reporters after a cabinet meeting at the presidential complex in Ankara.

Kalın also said that Turkey will retaliate in kind to sanctions after U.S. President Donald Trump imposed sanctions on Ankara over its operation in northeastern Syria.

"Turkey will not leave this unanswered," he said, vowing a stronger response.

Kalın underscored that U.S. officials were clearly told Turkey would not declare a ceasefire in northern Syria and that it will not negotiate with terrorists.

"YPG terrorists are destroying the demographic structure in Syria, not Turkey or Operation Peace Spring. It is about time to end YPG's dominance for the sake of Syria's territorial integrity, political unity and sociological balance," Kalın said.

"While Turkey is hosting around 4 million Syrians, it is taking care of around 3 million others in Syria, equaling to 1/3 of the total population. Is there any other country doing this?" he asked.

Kalın stressed that Turkey's ongoing operation will continue without slowing down until it reaches its aims.

"We are absolutely determined to clear east of Euphrates from terrorists as we did in Euphrates Shield and Olive Branch operations," he said.

Referring to the latest developments in Syria's Manbij, Kalın said replacing the American flag with the Russian and YPG/PKK being under the control of another force is "unacceptable".

The U.S.-led anti-Daesh coalition on Tuesday announced its withdrawal from Manbij, Syria, an area targeted by Turkey for clearing YPG/PKK terrorists.

More than 3,000 Daesh terrorists were neutralized and thousands were arrested and deported within the scope of Operation Peace Spring, Kalın stressed.

Highlighting that YPG/PKK uses Daesh detainees as a blackmail against the West, he said the releasing of detainees from prison is a concrete example.

On Sunday, thousands of Daesh terrorists, their families and other civilians — who were held in the region-fled from the camp area when the YPG/PKK set a camp on fire in the Ayn Isa district in northern Syria.

Kaliın said it was not acceptable to burden Turkey with the responsibility of Daesh detainees in northern Syria.

It is Turkey's natural right to ask to those who criticize Turkey for its Operation Peace Spring, the question of who released the Daesh elements and why were they released, he added.

Kalın also said that the status of Incirlik Air Base in Turkey will not change.

The U.S. forces had been allied with the terrorist YPG/PKK to defeat Daesh, an alliance Turkey has long criticized as both immoral and irrational.