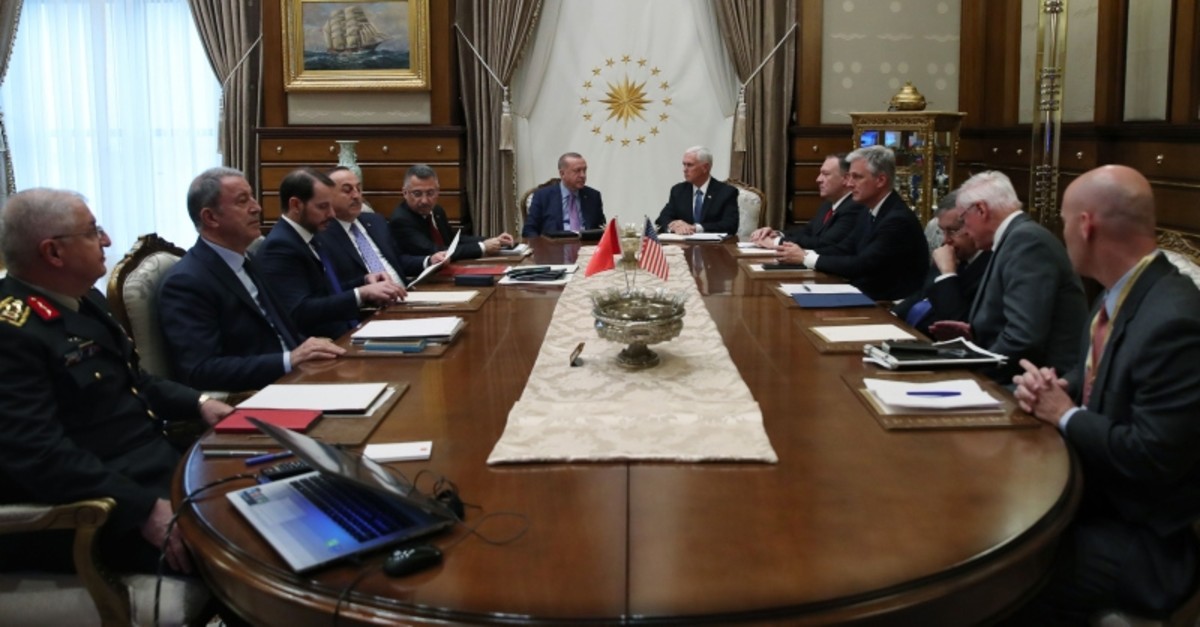 Turkish and U.S. delegations agreed Thursday that Turkey will pause its counterterrorism operation in northern Syria for five days, during which time the People's Protection Units (YPG) must withdraw from the proposed safe zone area.

"Operation Peace Spring is not stopped but paused," Foreign Minister Mevlüt Çavuşoğlu said in a news conference following the meeting. "This is not a cease-fire. Turkey can only stop the operation once all terror elements leave the (Syria) safe zone."

"This deal does not only include the withdrawal of YPG terrorists but also having their weapons seized and their fortifications and positions dismantled," he said. As part of the agreement, the U.S. has said it will facilitate the orderly withdrawal of the PKK-affiliated terrorist group within 120 hours, as well as seize heavy weapons and disable fortifications belonging to the YPG.

The delegations also agreed that Ayn al-Arab (Kobani) will not be included in the safe zone in northern Syria, which is to be "primarily enforced" by the Turkish Armed Forces, according to the agreement.

Vice President Pence said in a separate news conference the YPG will withdraw from the demarcation line 32 kilometers (20 miles) south of the Turkish border, stating several times that an "orderly withdrawal" is already underway.

"The YPG has given us repeated assurances that they are leaving the areas specified under the agreement," Pence told reporters.

He said that after the YPG withdrawal from the safe zone area and the end of military engagement, the U.S. will continue to engage diplomatically and humanitarianly, but not militarily, in Syria.

Pence also noted that once a "permanent cease-fire" is reached, the U.S. will withdraw current sanctions against Turkey and will not impose more.

"Erdoğan has given the opportunity for a peaceful solution," Pence said, adding: "I am grateful for the more than five-hour negotiation."

He said Thursday's agreement is a credit to the strong relationship between Erdoğan and Trump and between Turkey and the U.S.

Pence said that the agreement states that Turkey and the U.S. remain committed to fight Daesh terror group.

The 13-point Turkey-U.S. joint statement on northeastern Syria added that this "will include coordination on detention facilities and internally displaced persons from formerly ISIS/DAESH-controlled areas."

The joint statement also says that both countries "reiterate their pledge to uphold human life, human rights, and the protection of religious and ethnic communities."

It states that "Turkey and the U.S. agree that counter-terrorism operations must target only terrorists and their hideouts, shelters, emplacements, weapons, vehicles and equipment."

"The Turkish side expressed its commitment to ensure safety and well-being of residents of all population centers in the safe zone controlled by the Turkish Forces (safe zone) and reiterated that maximum care will be exercised in order not to cause harm to civilians and civilian infrastructure," the statement noted.

Erdoğan later responded to the tweet, telling the U.S. president, "many more lives will be saved when we defeat terrorism, which is humanity's arch enemy."

"I am confident that this joint effort will promote peace and stability in our region," Erdoğan added in the tweet.

Trump had earlier invited Erdoğan to the White House on Nov. 13. The Turkish leader has said he will only decide on visiting Washington after the U.S. delegation talks.

"We see the invitation as still valid," Çavuşoğlu said following the meeting. "I hope our expectations will be met and the necessary steps taken so that we can pay this visit."

Çavuşoğlu also commented on the letter Trump sent to Erdoğan before the operation began, which was widely criticized for its language and disregard for diplomatic conventions.

"We have given our response to President Trump's letter on the field. Regarding its tone, the American society itself is giving the best response by saying 'We have never seen such lack of finesse,'" Çavuşoğlu said.