26 attacks by PKK supporters recorded against Turkish community in Europe since Oct. 10 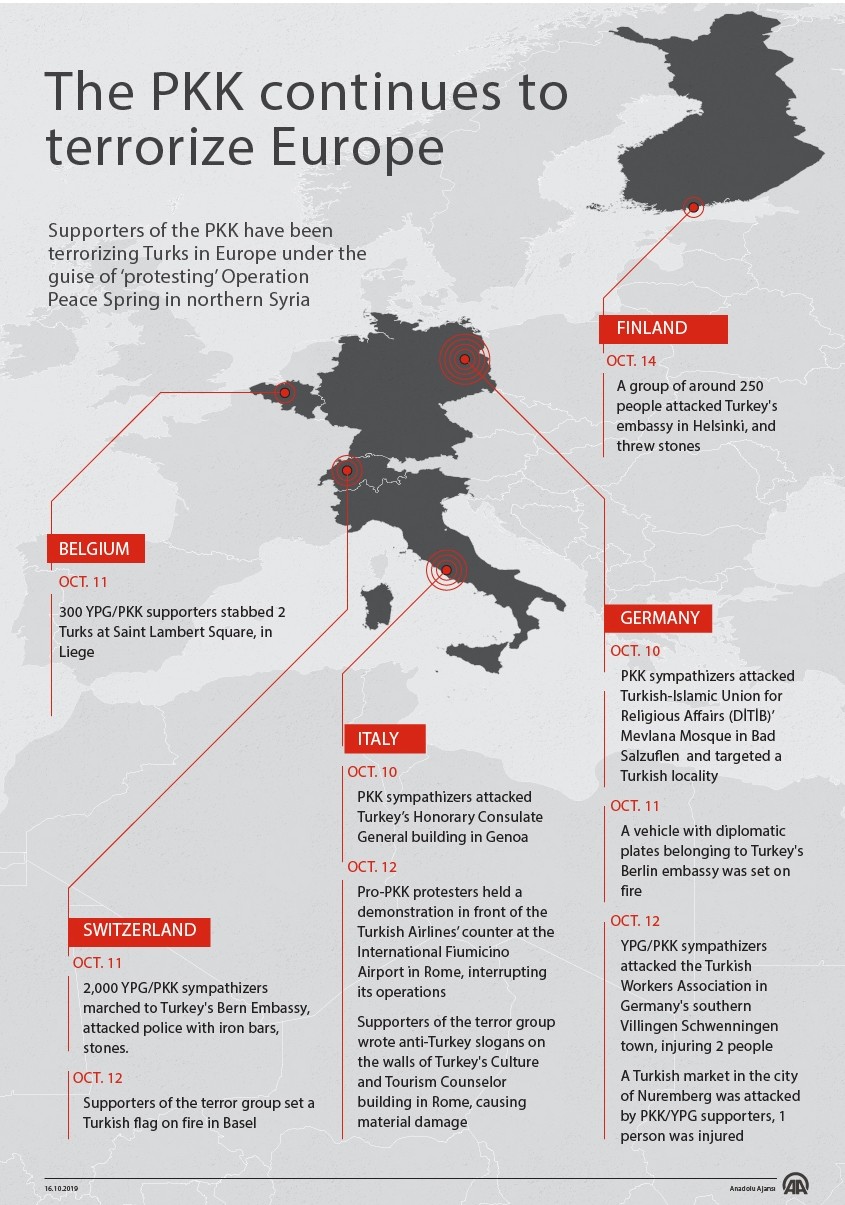 Supporters of the PKK terror group and its Syrian offshoot the People's Protection Units (YPG) have been terrorizing Europe under the guise of 'protesting' Turkey's Operation Peace Spring in northern Syria, carrying out 26 violent attacks against the Turkish community between October 10 and 17.

The attacks started a day after Turkey launched Operation Peace Spring on Oct. 9 to drive the People's Protection Units (YPG), the PKK's Syrian offshoot, away from its borders with northern Syria.

The attacks not only targeted Turkish civilians but also foreign missions, businesses, Turkish associations and mosques, and the sympathizers of the terror group even set fire to these places. Apart from attacking the Turkish community, PKK supporters also held rallies in support of the terrorist group in several European capitals, including Berlin, London, Amsterdam, Cologne and other cities.

14 attacks have been carried out by YPG/PKK supporters across Germany since Oct. 9.

Four Turks were injured in the latest attack that took place in the city of Ludenscheid, Germany on Oct. 16.

One of the wounded, a 50-year-old man was stabbed by the supporters of the PKK-affiliated People's Protection Units (YPG), a spokesman for the police said in a statement.

He suffered severe injuries and was taken to a nearby hospital,

The incident occurred during a protest organized by the YPG and PKK terrorist group supporters against Operation Peace Spring.

German police said the incident was still under investigation.

Turkey's Consul General in Essen, Şener Cebeci, visited the injured at the hospital. He assured them that the Turkish government will follow the developments on the incident.

The first attack by PKK sympathizers in Germany was on Oct. 10 against the Turkish-Islamic Union for Religious Affairs' (DİTİB) Mevlana Mosque in Bad Salzuflen, which targeted a Turkish locality.

Then on Oct. 11, a vehicle with diplomatic plates belonging to Turkey's Berlin embassy was set on fire.

The day after that, YPG/PKK sympathizers attacked the Turkish Workers Association in Germany's southern Villingen Schwenningen town, injuring two people. Meanwhile in Nuremberg, a Turkish market was attacked and one person was wounded.

On Oct. 12, supporters of the terror group set a Turkish flag on fire in Basel.

A group of around 250 people attacked Turkey's embassy in Helsinki, and threw Stones at the building on Oct. 14. 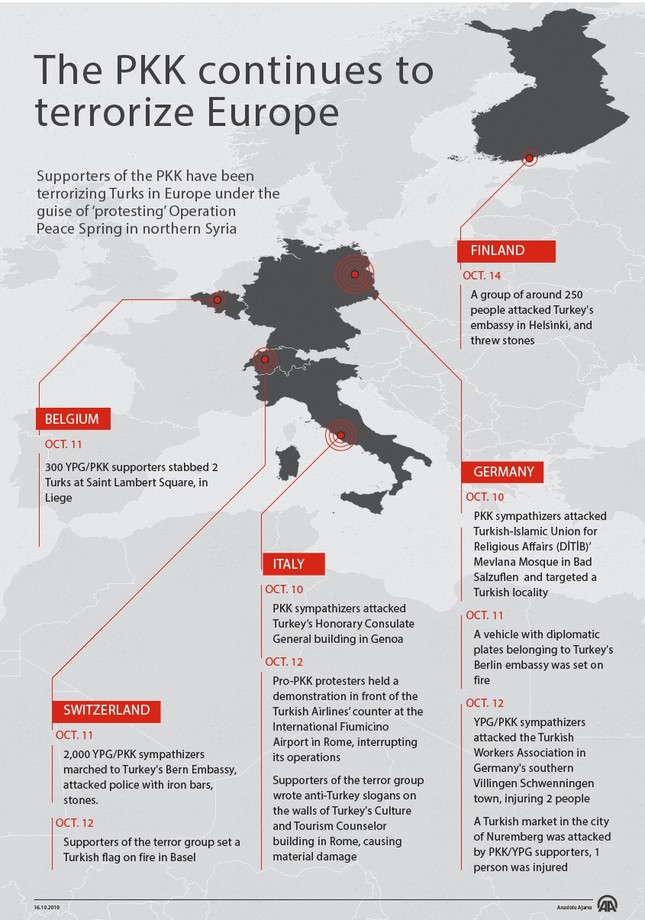 In another incident in France, three suspects with links to the PKK terrorist group were detained late Tuesday over an attack on the Turkish Consulate General, a report in the Le Parisien said.

The report added that the suspects, two men and a woman, were detained in relation to the attack on Turkey's Consulate General in Nantes.

PKK sympathizers painted propaganda graffiti on the walls of the building and poured gasoline around the building.

PKK supporters also painted on the walls of the Turkish Consulate in Lyon.

Police intervened in time thanks to the fire alarm, preventing a large fire, the report added.

Other attacks targeting the Turkish community also occurred in Greece. The Turkish Consulate General building in Thessaloniki, Greece, was attacked by a group of demonstrators Thursday

The group, consisting of 11 people, reportedly entered the Turkish Consulate building as visitors and started to chant anti-Turkey slogans and held banners that read "Solidarity with Rojava." Rojava is the name used by the PKK-linked terrorists in northeastern Syria to refer to the Syrian lands they occupy. The consulate's security staff brought the protesters under control before removing them from the building under the supervision of the Greek police.

Dutch police also said they had arrested 23 people in clashes between Turks and PKK supporters in the port city of Rotterdam during a demonstration against Ankara's operation in Syria. Trouble erupted on Wednesday night shortly after the beginning of a protest organized by the PKK supporters, which was swiftly followed by a counter-demonstration by Turks. The arrested, some of whom were armed with screwdrivers, "are suspected of open violence, aggression, destruction and insults," Rotterdam police said in a statement. Three police officers were slightly wounded in the clashes, which broke out in the city center, according to police. One of the officers suffered a broken wrist, Dutch media reported.

Dutch Prime Minister Mark Rutte strongly condemned the violence during a debate on the Turkish offensive in parliament late Wednesday."You can demonstrate in this country, but we do it in a civilized manner," Rutte said. "Social conflict should be resolved by dialogue, and not by the images we have seen in Rotterdam. It's absolutely unacceptable."

As the attacks mount, Turkey on Wednesday called for an increase in security measures against the PKK violence in European countries amid an ongoing anti-terror operation in Syria.

"In spite of all the notices given to the relevant countries' authorities, we witness with deep concern that the increase in the number of violent demonstrations and actions committed by PKK factions, especially in the European countries, continues," the Turkish Foreign Ministry said in a statement.

"Turkey reaffirms its expectations from the relevant countries with respect to strengthening the measures taken and displaying maximum consideration to protect our diplomatic and consular missions, the safety of life and property of Turkish citizens and personnel abroad and to preserve Turkish interests," the statement added.

"It should be noted that we will closely follow the identification, prosecution and conviction of the offenders," the ministry said.

A senior German security official on Thursday condemned the violence during protests by PKK supporters in Germany. The interior minister of the western state of North Rhine-Westphalia, Herbert Reul, said that "the limits of our tolerance have clearly been overstepped" and urged protesters to remain peaceful.

Not the first time, won't be the last

This is not the first time Turkish civilians have been targeted by the PKK in Europe as whenever Turkey launches an operation against terrorist groups, their supporters target innocent civilians across Europe by benefiting from the lack of measures by European governments.

Turkey has long criticized the European authorities for tolerating PKK activities in the country and has pressured them to take stricter measures against the propaganda, recruitment and fundraising activities of the group.

PKK supporters have been allowed to hold rallies, recruit militants and collect funds in Germany, which is home to some 5 million people with Turkish origin, including Kurds.

For instance, following the beginning of Operation Olive Branch in early 2018, PKK supporters attacked 13 mosques in Germany including Yeşil Mosque, Eyüp Sultan Mosque, Sultan Alparslan Mosque and Ulu Mosque. All of the mosques are run by the Germany branch of the Turkish-Islamic Union for Religious Affairs (DİTİB).