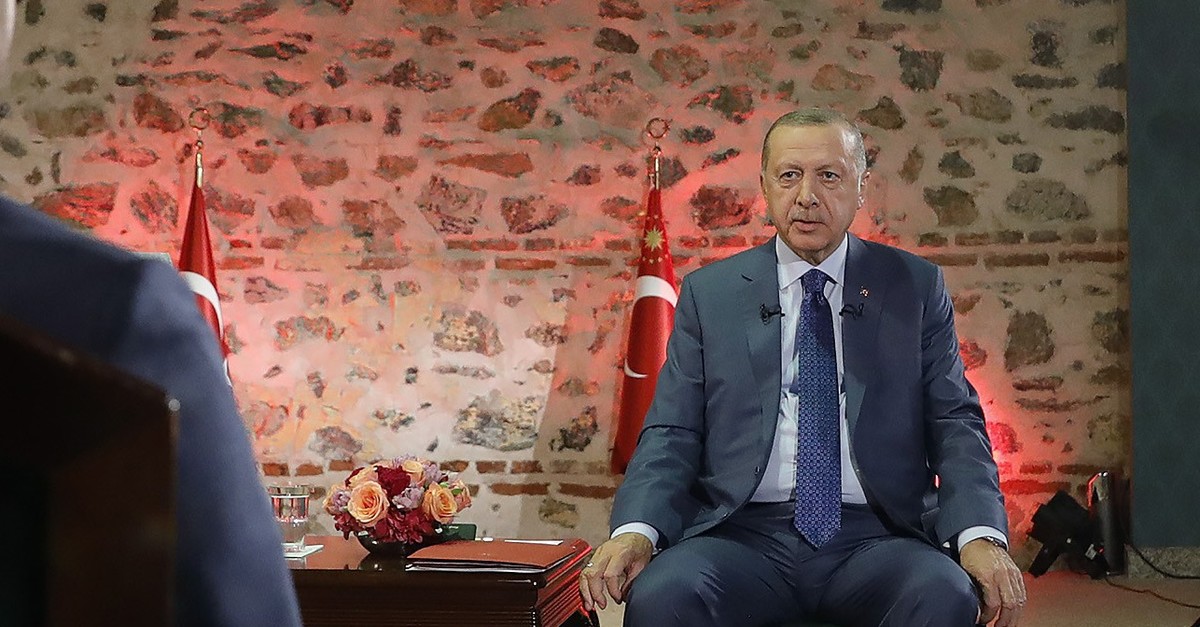 Turkey has already created a peace corridor 10 kilometers deep into Syria from Tal Abyad to Jarablus, President Recep Tayyip Erdoğan said in a live interview with broadcaster TRT, as he urged the U.S. to extradite a PKK-linked terrorist who is on the Interpol's wanted list.

President Erdoğan said that Turkey will create an observation post near Manbij in northeastern Syria. Touching upon the U.S.' failed promises regarding Manbij, Erdoğan said Washington told Ankara that they would leave the area within 90 days, but it has been a year and a half since their promise and the YPG has not left.

"Who does Manbij belong to? The terrorists? Manbij is 85% to 90% Arab-dominated area," Erdoğan said, adding that the civilians were forced to leave their homes after the PKK-linked People's Protection Units (YPG) terrorists occupied the area. The president continued by highlighting once again that Turkey aims to establish security in the area to facilitate the return of civilians to their homes.

"A no-fly zone is out of the question for Turkish presence in Syria. We will be at least 10 kilometers deep into Syria, which will facilitate our intervention against any possible YPG terror acts," he said.

The president explained the dilemma regarding the city of Ayn al-Arab, also referred to as Kobani, noting that the U.S. tells Turkey to avoid the area, while Russia tells Turkey to enter.

"We will make a decision according to developments," the president said. 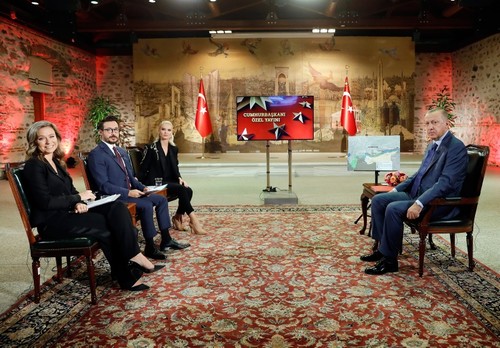 Erdoğan noted that the ringleader of the YPG Ferhat Abdi Şahin (Mazloum Kobani) is wanted with an Interpol red notice, adding that the U.S. should hand him over to Turkey.

Likewise, Justice Minister Abdülhamit Gül also said that Washington must extradite the terrorist ringleader when he arrives in the U.S.

"The U.S. gave at least 30,000 truckloads of weaponry to terror groups in Syria. We are NATO partners, why don't they give the ammunition to us?" the Turkish president asked.

Erdoğan also criticized leaders and politicians from Germany, France and the U.S. who have met with the terrorist organization members.

In regard to U.S. President Donald Trump, Erdoğan said Trump is "sincere" in their conversations.

"He has acted as honestly as possible up to this point in our personal relationship. I will visit the U.S. now that there is a positive atmosphere between our countries," he said, referring to a visit to Washington planned for Nov. 13. The two leaders will discuss recent developments in northern Syria and bilateral ties during the visit.

"We do not have a problem with Kurds, they are our brothers. The problem for us are the terrorist groups," Erdoğan reiterated.

In regard to Daesh terrorists in Syria, Erdoğan said that Turkey is meticulously tracking their whereabouts and the prisons in Syria where they are held. "We will be actively pursuing criminal prosecution for them," he said.

Erdoğan also addressed the negative reaction of the the Arab League to Turkey's operation. "The Arab League's reaction to our Operation Peace Spring is strange, as they have kicked Syria out of the union. Turkey is actively helping Arabs in the region while they are attacking them with barrel bombs," he said.

"The Arab League has failed to address any issues of the Islamic world so far," he added.

On Tuesday, Turkey reached an agreement with Russia on a 10-point plan to create a terror-free safe zone in northern Syria and they reiterated their commitment to the political unity and territorial integrity of Syria.

According to the agreement, PKK/YPG terrorists will pull back 30 kilometers (18.6 miles) from Turkey's border within 150 hours and security forces from Turkey and Russia will conduct joint patrols there.