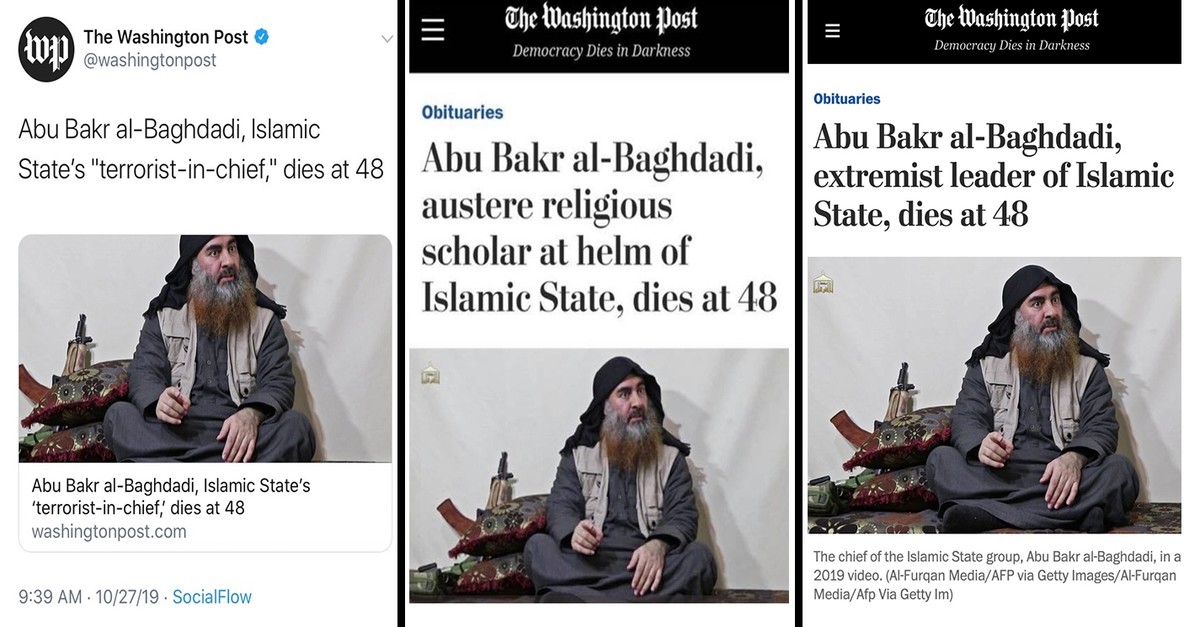 Washington Post editors were having a hard time on Sunday deciding which title to choose for a news piece on the death of Abu Bakr al-Baghdadi, the leader of the Daesh terrorist group. One of the choices they made drew fire from readers as it called him "austere religious scholar."

The first title the paper chose was "Abu Bakr al-Baghdadi, Islamic State's 'terrorist-in-chief,' dies at 48," using the group's self-proclaimed name, chosen despite a total denial of Islamic beliefs in the horrific acts they committed.

The title was later changed to a scandalous alternative: "Abu Bakr al-Baghdadi, austere religious scholar at helm of Islamic State, dies at 48."

This title received heavy criticism from readers, with one reminding the newspaper of the fact that "he was a serial rapist and murderer."

After heavy backlash, the paper ultimately changed the title to "Abu Bakr al-Baghdadi, extremist leader of Islamic State, dies at 48."

"Regarding our al-Baghdadi obituary, the headline should never have read that way and we changed it quickly," she tweeted.

Trump said in a statement to the nation from the White House's Diplomatic Room that "al-Baghdadi is dead" — fulfilling the top national security priority of his administration.

Trump said al-Baghdadi, as U.S. forces bore down on him, fled into a tunnel with three of his children and detonated a suicide vest. "He was a sick and depraved man, and now he's gone," Trump said. "He died like a dog, he died like a coward."

It was claimed that the forces that took part in the raid departed from the Incirlik Air Base located in southern Turkey's Adana.

"Prior to the U.S. Operation in Idlib Province of Syria last night, information exchange and coordination between the military authorities of both countries took place," the Turkish defense ministry said in a tweet, strengthening these claims.

"Having paid the dearest price in the fight against Daesh, PKK/YPG, and other terrorist organizations, Turkey welcomes this development. I am confident that a decisive struggle against terrorism, in line with the spirit of alliance, will bring peace to all of humanity," he wrote on Twitter.

He said al-Baghdadi's killing "marks a turning point in our joint fight against terrorism."

"Turkey will continue to support anti-terror efforts — as it has done in the past," Erdoğan wrote.
Last Update: Oct 27, 2019 10:01 pm
RELATED TOPICS