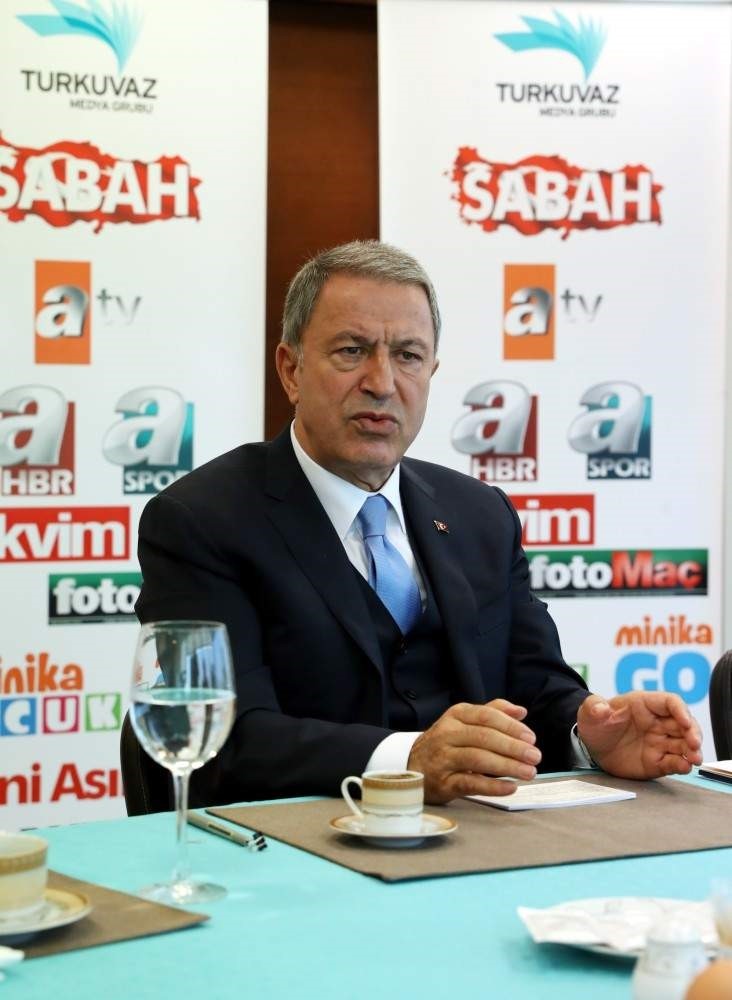 by Nur Özkan Erbay Oct 28, 2019 3:15 pm
Terrorists of the PKK-affiliated People’s Protection Units (YPG) released 750 Daesh prisoners from a prison in northern Syria, Defense Minister Hulusi Akar said, noting that 265 of those terrorists surrendered and are now under the control of the Turkish army.
Speaking to Daily Sabah on Ankara’s Operation Peace Spring, Akar emphasized that Turkey has been the only country fighting against Daesh on the ground and is also the country that suffered most from the terrorist organization’s attacks. “Since 2012, 600 Turkish citizens have been killed in Daesh attacks. We fought against Daesh on the ground with Operation Euphrates Shield, which caused substantial losses in the terrorist organization’s ranks,” he said.
The Turkish government previously released footage of the prison where YPG terrorists held captive Daesh members, which was evacuated after Turkish forces entered the town in Operation Peace Spring. Some international media outlets also recently confirmed the incident. The Syria producer for BBC, Riam Dalati, said in a tweet late Sunday that "corrupt" members of the YPG, which constitute nearly all of the umbrella organization Syrian Democratic Forces (SDF), helped smuggle Daesh terrorists into restive Idlib province.
"Back in April, a trusted contact of ours had told us about how corrupt #SDF officials were smuggling #IslamicState families to #Idlib," Dalati said in the tweet, using the self-styled name for the Daesh terrorist group.
Akar said that Turkey will fight until the end against distortions and black propaganda which have been exposed during and after the military operation. “We have showed maximum sensitivity to protect people, residential areas and historical and religious sites. One can understand it by comparing the before and after situations in cities such as Afrin, Ras al-Ayn and Tal Abyad, which were liberated by Turkish operations,” the defense minister said, pointing to devastation in Aleppo, Raqqa, Mosul and Eastern Ghouta, for comparison.
Some media outlets, particularly in Europe and the U.S., published numerous distorted news stories regarding Turkey’s Operation Peace Spring. In the most well-known example, the U.S. broadcaster ABC News came under fire for airing a video that purported to show a Turkish attack in northern Syria against civilians amid Turkey's operation, when in fact the footage was from a 2017 military gun show in Kentucky. U.S. President Donald Trump on Twitter also slammed the channel for spreading "fake news." ABC News later apologized for airing the video.
Akar — stressing that Turkey’s operation aims to maintain the territorial integrity of Syria, eliminate terrorist threats near its borders and provide an appropriate environment for refugees to return their homes — said that Kurds have suffered from the YPG just as other ethnic groups.
“Due to the YPG’s oppressive policies, 400,000 Kurds fled to Turkey, while another 300,000 migrated to Iraq. In total, 1.5 million Kurds were displaced,” Akar said.
Since 2016, Turkey's Euphrates Shield and Olive Branch operations in northwestern Syria have liberated the region from YPG and Daesh terrorists, making it possible for nearly 400,000 Syrians who fled the violence to return home. Ankara aims for 1 million more refugees to voluntarily return to the designed safe-zone in northern Syrian territories liberated in Peace Spring.
Speaking on the operation that killed Daesh leader Abu Bakr al-Baghdadi, Akar said the operation was carried out in coordination with Turkey but its air space was not used. Trump announced Sunday in a televised address to the nation from the White House's Diplomatic Room that al-Baghdadi is dead. He said the "No. 1 terrorist leader" has been "brought to justice" following the "dangerous and daring" special operations mission in Syria.
Last Update: Dec 20, 2019 1:17 am
RELATED TOPICS