From FSA to SNA: A Syrian opposition story 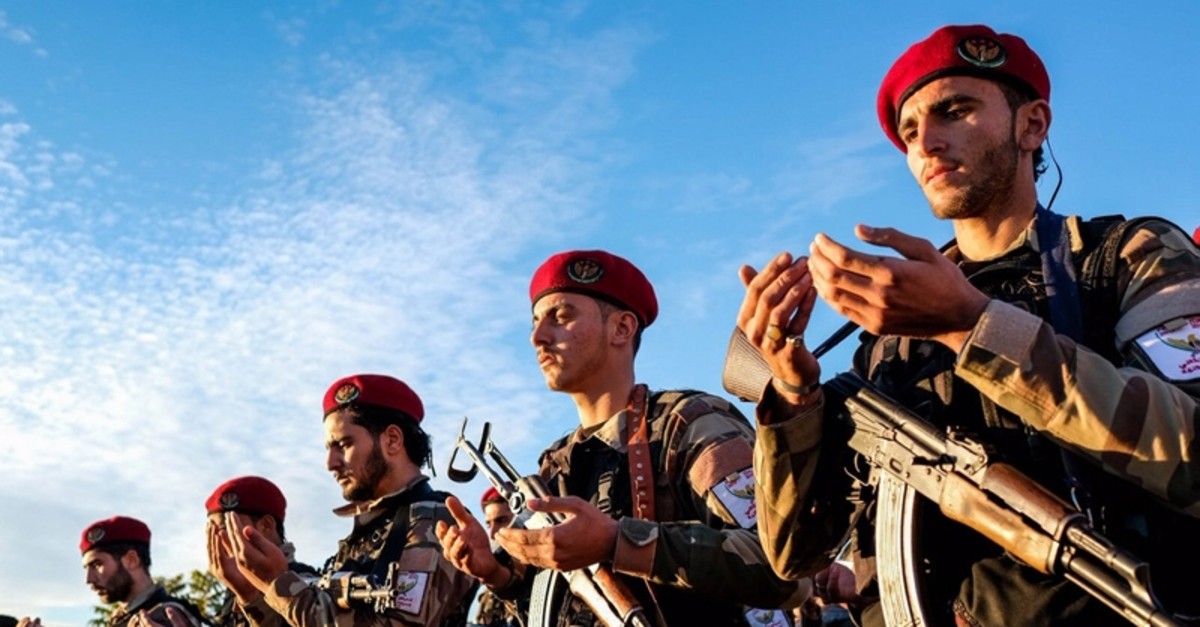 Ppoto shows FSA commanders praying in Manbij, Syria during Operation Euphrates Shield. (FILE Photo)
by Daily Sabah Nov 02, 2019 12:28 pm
The last couple of weeks have been marked by the achievements of the Turkish military in northern Syria through an operation named Operation Peace Spring, which aimed to eliminate terrorist elements and restore peace to the region. During the operation, the military proved to be successful at its aim by clearing designated areas, especially strategic points such as Tal Abyad and Ras al-Ayn, from the PKK’s Syrian affiliate, the People’s Protection Units (YPG), and paving the way for the formation of a safe zone for the Syrian refugees to return. However, in these efforts, The Turkish military was not alone. In fact, it was accompanied at all times by an opposition force named the Syrian National Army (SNA), which is currently occupied with the challenging responsibility of providing the region’s security and stability.
It can be said that SNA is the reconfigured and even broader version of the Free Syrian Army (FSA), which was Turkey’s partner in the field during the previous two cross-border operations of the country in northern Syria: Operation Euphrates Shield and Operation Olive Branch. Founded in 2011 by former officers from the Syrian Armed Forces who opposed the use of violence by the Syrian regime, the FSA was a military network that consists of many Arab, Turkmens and Kurdish subgroups and ultimately aims to bring down the Syrian regime. The FSA quickly gained strength and international support for its fight against regime forces, becoming the main, legitimate, opposition group in the country. It formed a legitimate military backbone of the opposition under the Syrian flag and was positioned as the military wing of the Syrian Provisional Government established in March 2013.
Following the end of the Operation Euphrates Shield, President Recep Tayyip Erdoğan announced that a new army of opposition forces was about to be formed, which was the hinting of the first re-organization of the FSA. Following the announcement, on Dec. 30, 2017, the National Army was officially established and partnered with Turkey in Operation Olive Branch. It was consisting from 36 different opposition groups and was divided into three army corps with a total of 10.000 troops that were active in several northern Syria provinces such as Azaz, Jarablus, al-Bab, Afrin, Idlib and Latakia.
However, a year after the Operation Olive Branch, it was announced once again on Oct. 4, 2019 that the opposition forces’ army as being re-branded once again. This time, it gained the name of the SNA, which is basically the composition of the FSA or National Army forces with the groups affiliated with the National Liberation Front. The National Liberation Front was founded on May 28, 2018, as 11 groups from the Idlib region came together under the name. The organizational scheme of the original FSA, however, was maintained within the SNA.
The size of this new army, however, does not have certain numbers. While some, such as Selim Idris, the chief of general staff of the army, was claiming that there were 50.000 troops, other claims vary from 100,000 troops to 110,000 troops. The army also kept the larger divisions that were included within the original FSA such as the Sultan Murad and the Hamzat division.
The aim of the SNA is to bring together various opposition groups to operate under one command within a regular, professional army. It also aims to clear the terrorist elements from Syria and provide order in the liberated areas in order to turn the province into places that displaced refugees can safely return.
Recently, the SNA held military exercises in order to support Turkey in Operation Peace Spring launched east of the Euphrates River and proved themselves successful during the course of the operation.
Last Update: Dec 20, 2019 1:23 am
RELATED TOPICS