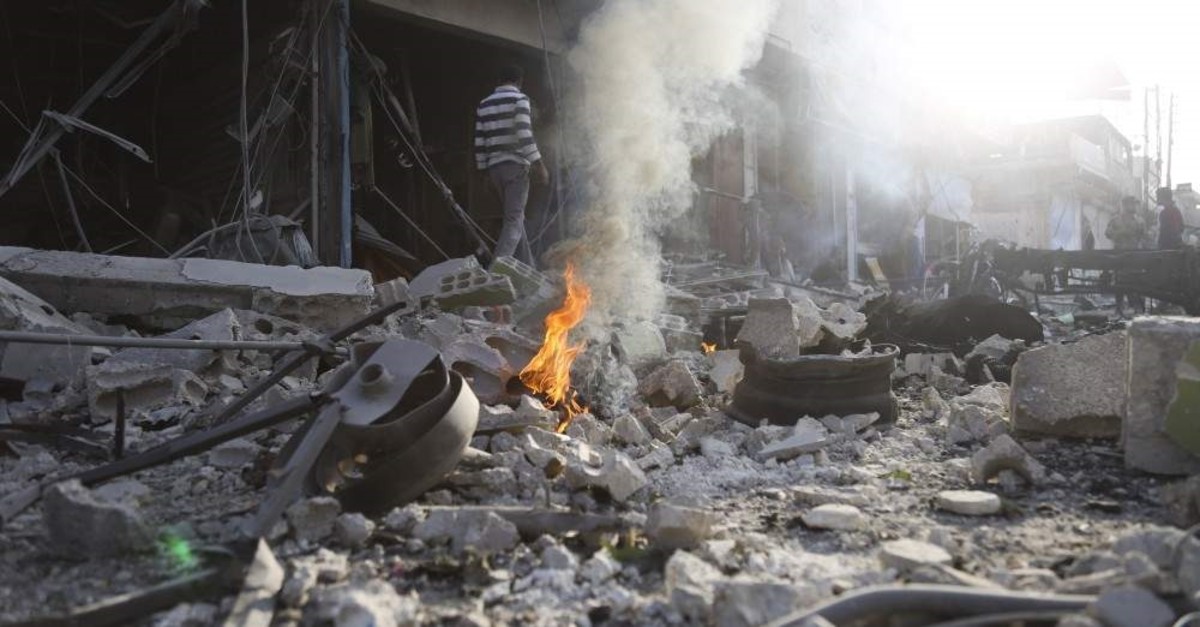 The Western media and politicians prefered to remain silent about the YPG's terror attack that killed 13 civilians in Tal Abyad, although the safety of civilians in northern Syria was the focus of concerns three weeks ago

The Western media and politicians have chosen to remain silent once again to the atrocities being committed by the PKK terrorist group’s Syrian branch People's Protection Units (YPG).
The YPG killed 13 civilians and injured 20 others on Saturday in an attack carried out at a market in Tal Abyad, Syria.
Although the Western media and politicians expressed their “concerns” over civilian safety during Turkey's anti-terror Operation Peace Spring, they have failed to show any reaction to the YPG terrorist group, which intentionally targeted civilians in another bomb attack.
YPG attacks indiscriminately target Arabs, Kurds, civilians, children and people who returned to their hometowns while the Western media remains silent about it, despite the fact that they criticize Turkey’s operation.
The Turkish Defense Ministry confirmed later Saturday that a bomb-laden vehicle exploded in a marketplace located in Tal Abyad's city center in the afternoon.
Turkish residents of Akçakale, Şanlıurfa, which is located right across the Syrian city, heard the explosion, according to local reports.
Emergency teams from Akçakale were immediately dispatched to the scene of the incident to treat the civilians, who were transported to Akçakale Hospital.
The YPG terrorist group has been targeting settlement areas under the control of the Syrian National Army (SNA), which has fought alongside Turkish forces in anti-terror operations in northern Syria.
YPG terrorists continue to carry out attacks in the Tal Abyad and Ras al-Ayn districts despite pulling out of the area under a deal reached by Turkey and the U.S. on Oct. 17, 2019.
Yesterday, a YPG-linked Twitter account also openly threatened to kill civilians.
“We reiterate that these terrorists and their families are the main targets of our forces. Our forces will target all the elements in the Afrin canton that are in contact or cooperation with the Turkish invasion forces,” wrote a Twitter account called “Rojava Defense Units I YPG.”
Turkey launched Operation Peace Spring on Oct. 9 to eliminate terrorists from northern Syria in order to secure its southern borders, aid in the safe return of Syrian refugees and ensure Syria's territorial integrity.
In its more than 30-year terror campaign against Turkey, the PKK – listed as a terrorist organization by Turkey, the U.S. and the European Union – has been responsible for the deaths of 40,000 people, including women, children, and infants.
Turkey condemns deadly terror attack
Turkish officials strongly condemned the deadly YPG terror attack in Tal Abyad.
“We harshly condemn the inhumane attack of the bloody YPG terrorists who carried out a bomb attack against the innocent civilians of Tal Abyad who have been able to return to their homes and lands as a result of Operation Peace Spring and we call on all countries to take a stand against this brutal terror group,” the Defense Ministry said in a written statement.
The statement further wished “God's mercy upon the dead and speedy recovery for the injured.”
Foreign Minister Mevlüt Çavuşoğlu also condemned the attack on Twitter saying, “The attack targeting innocent civilians in Tal Abyad should serve as a lesson to those who provide shelter to the YPG terrorist organization and justify its action.”
He added the “heinous attack” proves that Turkey's anti-terror operation in Syria is right and timely.
Decrying the attack on his Twitter account, Presidential Communications Director Fahrettin Altun said, "This terror attack exposed once again the true face of the YPG terror group and the risks of supporting terror groups.”
"This attack shows that partnering with terrorist organizations will not correct their behavior and change their methods of reaching their goals but only increase their destructive and violent capacity to conduct further terrorist actions,” he added.
Altun noted that partnering with the terror group has given them better opportunities and equipment to plot more bloody attacks, and said the attack in Tal Abyad showed that "the YPG is back to its classic methods."
He said those who support the terrorist group are responsible for this and other attacks in the future, and reiterated Turkey's determination to fight against terrorism.
"Those who try to portray the YPG as a legitimate fighting force must show sympathy for the victims of this attack. Terror is not a threat that can be dealt with through double standards," Altun said.
Meanwhile, Presidential Spokesman İbrahim Kalın also condemned the attack on Twitter, saying, “This shows once again the true face of this terrorist organization. Turkey will continue to fight against terrorism in all of its forms and shapes.”
US should halt terror support

Presidential adviser Gülnur Aybet on Saturday called on the U.S. to stop supporting the YPG terrorist group amid its attack in Syria's Tal Abyad that killed at least 13 civilians.

"With today's #YPG #SDF attack on Tal Abyad we see this terrorist organization is not only a threat to us but to the people of this area who are returning to their homes after being forcibly displaced by the YPG. Please check your facts and do not listen to terrorist propaganda," Aybet said on her Twitter account.

Referring to her meeting last year with member of the House Committee of Foreign Affairs and the House Armed Services Committee Congressman Joe Wilson, Aybet noted that she is "disappointed."

"While your NATO ally Turkey is striving to bring peace & stability to this corner of Syria, the #YPG/SDF exploded a car bomb in Tal Abyad today killing 13 civilians. That's what #Terrorists do," she said.

Aybet highlighted that Turkey's aim in northern Syria is to clean the area from terrorists and create a "stable secure environment for the return of displaced people."