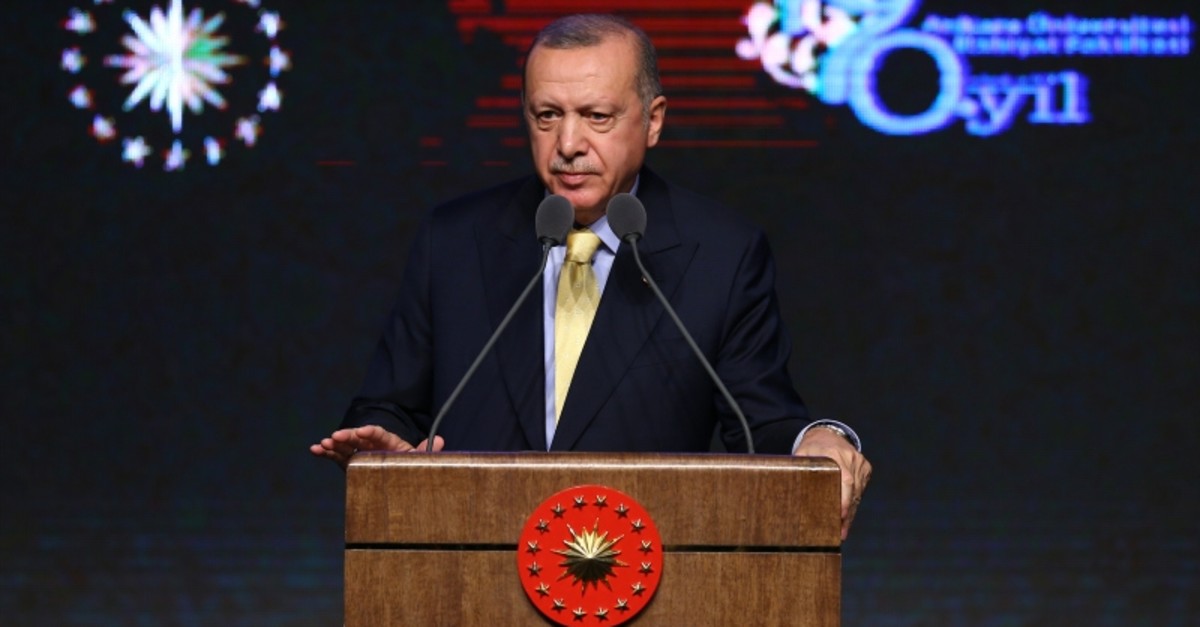 Speaking about a U.S. military raid that led to al-Baghdadi's death last month, Erdoğan said Washington immediately launched a media campaign over the success of the operation.

"We captured his (al-Baghdadi's) wife, but we did not make a fuss. Similarly, we caught his sister and brother-in-law in Syria. We will continue our work in this regard," Erdoğan said at a ceremony marking the 70th anniversary of the foundation of Ankara University's theology faculty at Beştepe National Congress and Culture Center in the Presidential Complex.

Earlier this week, officials said Turkish security forces captured al-Baghdadi's older sister, her husband, daughter-in-law and five children. Rasmiya Awad, 65, was captured in a raid Monday on a trailer container she was living in with her family near the northern Syrian town of Azaz in Aleppo province. The area is part of the region administered by Turkey following Operation Euphrates Shield launched against Daesh and PKK-linked People's Protection Units (YPG) terrorists in August 2016.

An Iraqi national from Samarra, al-Baghdadi killed himself when cornered in a tunnel in a U.S. military operation in Idlib, officials announced on Oct. 27. Daesh, in an audiotape posted online on Thursday, confirmed that its leader had died and vowed revenge against the U.S.

Daesh said a successor to al-Baghdadi identified as Abu Ibrahim al-Hashemi al-Quraishi had been appointed. A senior U.S. official last week said Washington was looking at the new leader to determine where he came from.

The president continued by criticizing terrorists who exploit religion to carry out their activities.

"A careful analysis of those who exploit Islam to carry out terrorist activities will show that they are actually enemies of Islam," he said.

Describing terrorists as people who indiscriminately shed the blood of innocent people for their deviant ideologies, Erdoğan said true Muslims cannot be terrorists.

"Western powers, which shamelessly use the term 'Islamic terror' should look in the mirror first. If you're looking for terrorists, you have them," he said.

Muslims throughout the world strongly oppose the association of terrorism with Islam, which has become a trend following attacks by Daesh and other terrorist organizations, which exploit religion.

Turkish officials, in particular, have urged world leaders to avoid associating any religion with terrorism, as it has led to a surge in the amount of anti-Muslim attacks in the West. They argue that a terrorist is a terrorist and that his or her religion is irrelevant.

"We have proof in our archives regarding who established Daesh and used it as a tool," Erdoğan said, as he slammed the U.S. for hosting Gülenist Terror Group (FETÖ) leader Fetullah Gülen in a large compound in Pennsylvania.

Erdoğan continued by saying that Turkey has been forced to stand up tall in the face of persistent attacks, including hidden sanctions on the country's defense needs.

"When we came to power, only 20% of Turkey's defense industry was domestically produced, but now it is 70%," Erdoğan said, adding that Turkey's success in the anti-terror fight is mostly due to the fact that it is able to produce its own unmanned aerial vehicles (UAVs), including armored ones.

Erdoğan said that he used to tell former U.S. President Barack Obama that Turkey had ammunition problems in its anti-terror fight. The latter had told him that they would send ammunition but never did, so Turkey ended up producing its own smart bombs, he said.

The purchase of the Russian system has been a sticking point between Ankara and Washington, especially for the past few months, as the U.S. has argued that the S-400 system would be incompatible with NATO systems and expose its advanced fifth-generation F-35 fighter jet to possible Russian subterfuge.