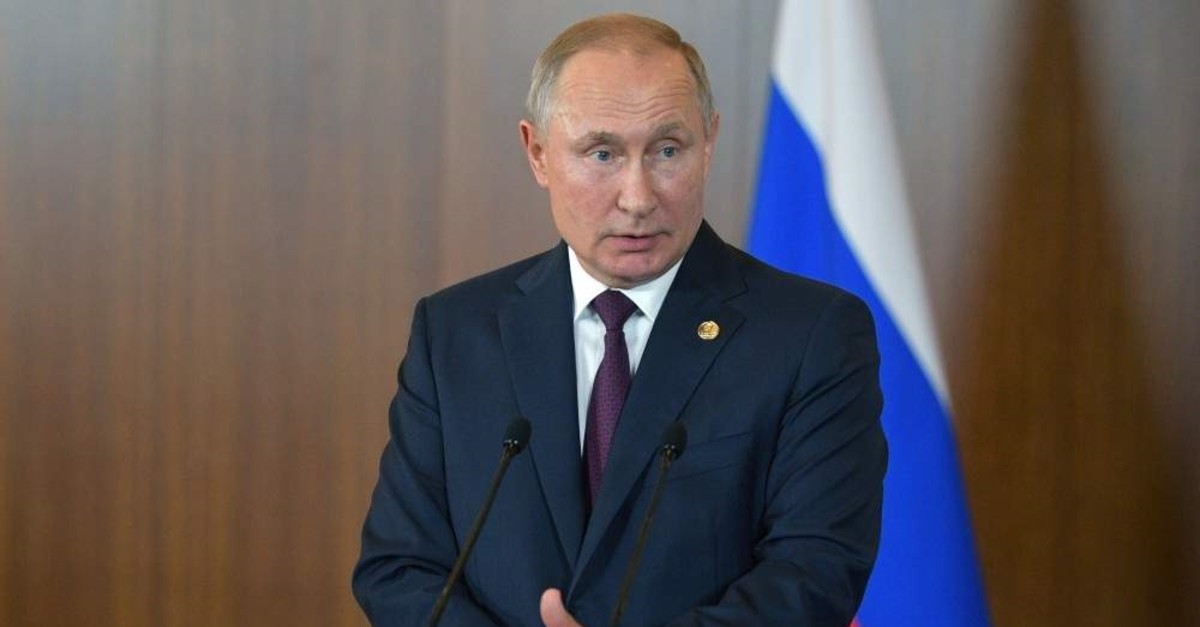 Russian President Vladimir Putin speaks at a news conference after the BRICS summit in Brasilia, Brazil Nov.14, 2019 (Reuters Photo)
by Daily Sabah Nov 15, 2019 9:38 am
Turkey and Russia have agreed to intervene in actions violating the deal reached between the two countries in northern Syria, President Vladimir Putin said Thursday.
Putin’s comments followed a series of mortar attacks and sniper fire by the PKK’s Syrian offshoot the People’s Protection Units (YPG) against the Turkish military and the Syrian National Army participating in Operation Peace Spring to clear the border area from terrorists to establish a safe zone there.
“The Turkish side will convey to their Russian counterparts their concerns regarding the developments in the region,” Putin told a news conference in Brazil on the sidelines of the BRICS Summit, adding that Russia is ready to take concrete action if it sees violations on the ground.
He noted that both countries are constantly in contact with each other regarding the situation in northern Syria. Moscow promised to Ankara that the PKK or YPG will not be on the other side of the border.
There have been dozens of attacks by YPG forces in Syria. Turkey and Russia have completed six joint patrols in the region following the completion of the 150-hour withdrawal period as per the deal.
Turkey launched Operation Peace Spring, the third in a series of cross-border anti-terror operations in northern Syria targeting terrorists affiliated with Daesh and the PKK's Syrian offshoot the People's Protection Units (YPG), on Oct. 9.
The operation, conducted in line with the country's right to self-defense borne out of international law and U.N. Security Council resolutions, aims to establish a terror-free safe zone for Syrians return in the area east of the Euphrates River controlled by the U.S.-backed Syrian Democratic Forces (SDF), which is dominated by YPG terrorists.
Ankara agreed with Washington on Oct. 17 to pause its operation to allow YPG/PKK terrorists to withdraw from the planned safe zone.
On Oct. 22, Ankara and Moscow reached a deal under which YPG/PKK terrorists were to pull back 30 kilometers south of Turkey's border with Syria within 150 hours, and security forces from Turkey and Russia would mount joint patrols there.
The PKK — listed as a terrorist organization by Turkey, the U.S. and the European Union — has waged a terror campaign against Turkey for more than 30 years, resulting in the deaths of nearly 40,000 people, including women, children and infants.
The Russian president also said the militants in the camps near the Turkish border may pose a threat to all countries in the region and Europe.
“We need to put in joint efforts to fight against these [militants]” he said.
There are 1,201 Daesh terrorists in Turkish prisons, while Turkey captured 287 fighters released from YPG-controlled prisons during Operation Peace Spring in Syria.
Turkey has started repatriating some of the Daesh terrorists held in prisons, despite opposition by some European countries.
The Russian president also said that the U.S. presence in Syria is not legitimate.
“The U.S. army is still in this region and as we said many times, we do not consider their existence here to be legitimate.”