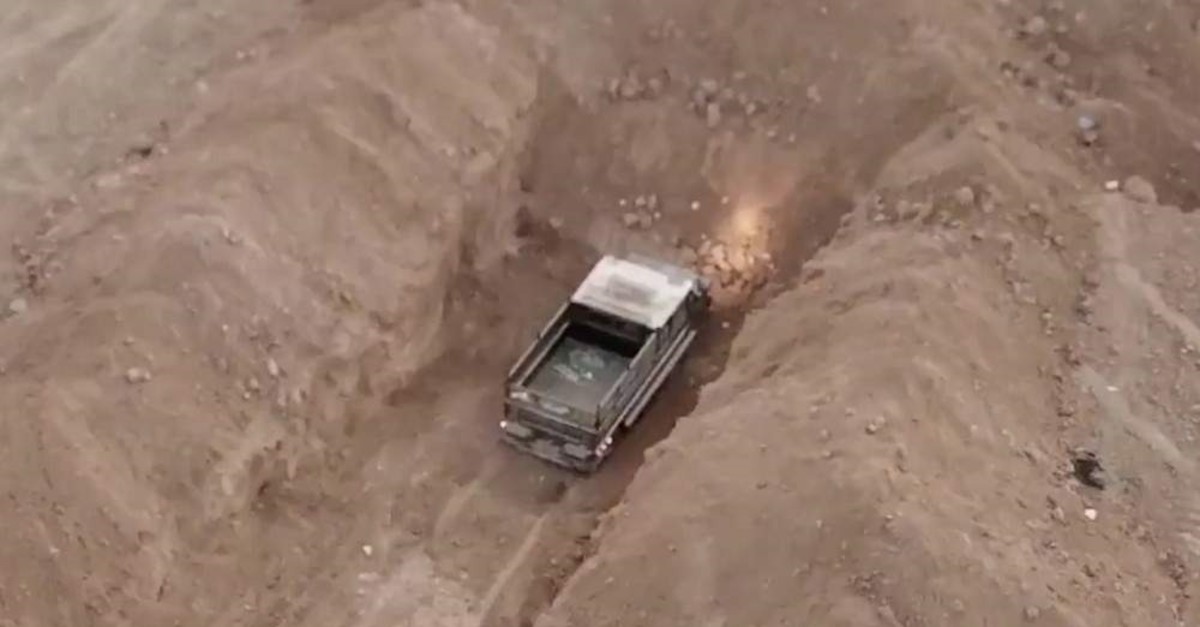 | AA Photo
by Daily Sabah Nov 15, 2019 12:11 pm
The Turkish military successfully defused a bomb-laden vehicle in Syria’s Tal Abyad, preventing a terrorist attack by the PKK’s Syrian offshoot, the People’s Protection Units (YPG), the Ministry of Defense said Thursday.
The ministry noted that the terrorists were planning to carry out a car bomb attack targeting civilians in northern Syria’s Hamam Turkuman.
“The vehicle was towed to a vacant area and detonated in a controlled manner to prevent damage to urban areas,” the ministry said.
Meanwhile, the Syrian National Army (SNA) Major Hussein Hammadi, who is the commander of the army’s eastern faction, said that the YPG terrorists used stolen vehicles of civilians to carry out suicide attacks in liberated areas.

Our commandos spotted and prevented another car bomb attack by PKK/YPG terrorists in the last second in the south of Tel Abyad, aiming to be detonated in Hamam Turkuman. The vehicle was towed to a vacant area and detonated in a controlled manner to prevent damage to urban areas. pic.twitter.com/kMBcsRMgVx

The YPG terrorists allegedly installed bombs on the vehicles of civilians detained in areas under their control, and detonated them when these civilians reached liberated areas, Hammadi told Al Khabur.
Hammadi noted that an investigation has revealed that a vegetable seller named Khalil Badr al-Ali, was arrested in Ain Issa by the YPG while driving on Oct. 29 for providing food supplies to the SNA. He was released on Nov. 13 and was stopped at an SNA checkpoint. A search on his vehicle showed that his car had been loaded with explosives, Hammadi said.
The car bomb attack, which claimed the lives of seven civilians on Sunday was also carried out with a car equipped in a similar manner, SNA sources said, noting that civilian named Hamad Hajj Al-Bathan was detained by the YPG in Raqqa, where the terrorists installed the bombs during the man’s detention and detonated it after he retrieved it and drove to the marketplace.
The Turkish military cleared Tal Abyad and Ras al-Ayn towns in Operation Peace Spring, which was launched on Oct. 9 to liberate the area east of the Euphrates River from YPG terrorists with the goal to secure Turkey’s borders and facilitate the voluntary return of Syrian refugees.
Tal Abyad, which was cleared of terrorists on Oct. 13, is populated to a great extent by Arabs and was occupied by the Daesh terrorist group in 2014. A year later, the YPG occupied the city with the support of the U.S.
Last Update: Dec 20, 2019 1:42 am
RELATED TOPICS