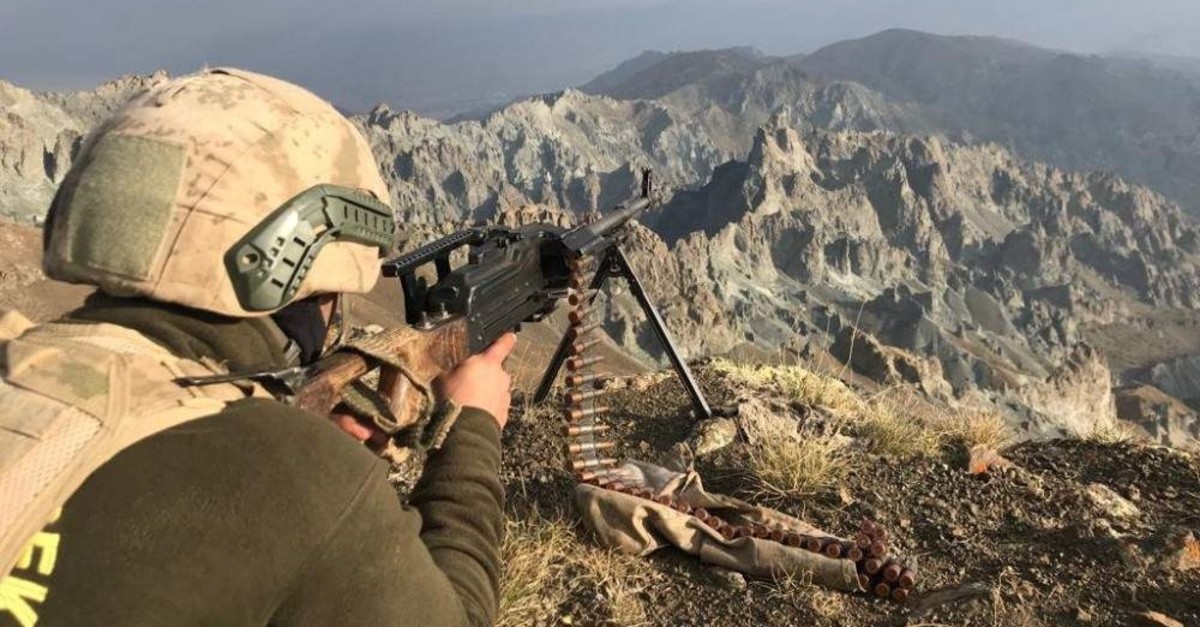 | AA File Photo
by Anadolu Agency Nov 18, 2019 3:16 pm
Security forces neutralized 127 so-called senior terrorists of PKK terrorist organization and its Syrian offshoot the People’s Protection Units (YPG) who were on the Turkish Interior Ministry's wanted list, during the domestic and cross-border operations since Jan. 1.
Turkish authorities often use the term "neutralized" to imply the terrorists in question surrendered or were killed or captured.
The counterterrorism operations were supported by the Turkish Armed Forces (TSK), police, gendarmerie, and the National Intelligence Organization (MIT).
During the operations, 127 senior terrorists of the PKK/YPG were neutralized. 12 of them were at the top category of the Interior Ministry's most wanted terrorists list.
According to data compiled by Anadolu Agency, security forces conducted 125,552 operations against terrorist organizations and 1,358 terrorists were neutralized, while 45,384 arrest warrants were issued for the suspects.
Ishak Özcaktu, codenamed "Erhan Garzan Porsipi," was the mastermind of numerous terrorist attacks in Turkey and wanted in the top category of the list.
He was behind the terrorist bomb attack that killed 36 police and eight civilians at the Vodafone Park stadium of Besiktaş football club in Istanbul in December 2016. Some 155 were injured.
He was also the perpetrator of the deadly Ankara attack, which hit Merasim Street, close to the Turkish General Staff and parliament buildings, in February 2016. The bomb blast claimed the lives of 29 people and wounded 79 others.
The terrorist was also accused of spearheading a bomb blast which killed 15 soldiers and wounded 20 others in Kayseri in December 2016 after targeting a military vehicle.
Musluh Ike, code-named "Tekoser Zagros," was the so-called person-in-charge of Metina region of northern Iraq, and the instigator of many actions held in Şemdinli and Çukurca districts of Turkey's southeastern Hakkari province. He was wanted at the top category of the list and neutralized in a joint operation in Metina region by MIT and TSK.
Two of the so-called senior terrorists of YPG/PKK, Servet Aydın -- codenamed "Gulciya" -- and Söylemez Yaşar -- codenamed "Tekosin Batman" -- were neutralized in an airstrike in northern Iraq.
Özge Aydın, code-named "Ceren Güneş," who received military training in the YPG/PKK ranks, was neutralized during the clash that broke out in northern Syria on Nov. 3.
In its more than 30-year terror campaign against Turkey, the PKK -- listed as a terrorist organization by Turkey, the U.S. and EU -- has been responsible for the deaths of 40,000 people, including women, children and infants. The YPG is the PKK's Syrian offshoot.
Last Update: Dec 20, 2019 1:45 am
RELATED TOPICS