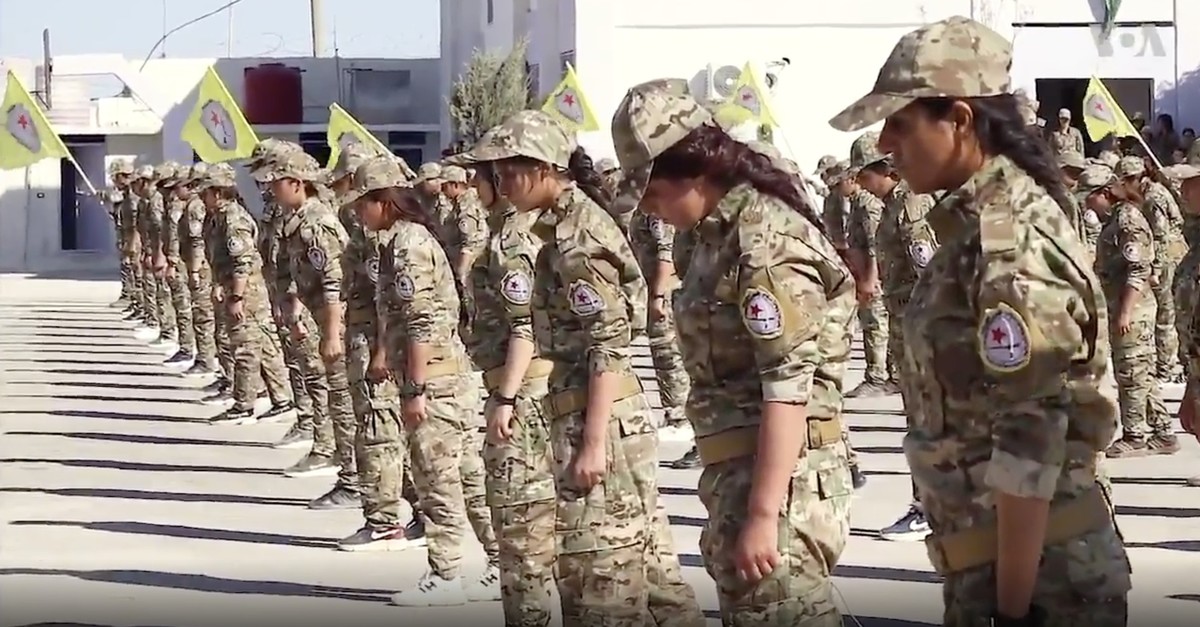 The official spokesman of Operation Inherent Resolve – the anti-Daesh global coalition of which Turkey is a member – shared a video on Monday promoting hatred against Turkey and its anti-terror operation against the PKK's Syrian affiliate the People's Protection Units (YPG).

In the video, a so-called "academy" is seen where female terrorists are being trained.

"Congratulations to the new class of female SDF fighters," Col. Myles B. Caggins III said in a tweet, using the name of the umbrella organization over YPG, the Syrian Democratic Forces (SDF), also adding a congratulatory message in Kurdish.

One of the female terrorists says in the video: "The gathering of the women today is an indication of threats posed by Turkey. Although Erdoğan and others threaten us everyday, our people say that 'we will not surrender, we will resist.' Therefore, the participation of women in the self-defense mission is taking place today."

In an obvious and frequently-used tactic to dodge backlash from Turkey, the colonel stated in a following tweet: "The Coalition supports the military training of SDF specifically for the mission to defeat ISIS remnants in eastern Syria. The Coalition does not endorse the personal opinions expressed by any individual SDF members."

Despite plentiful evidence provided by the PKK's numerous offshoots of their organic ties to the internationally-recognized terror group, U.S. support for terrorism in the region has continued to reach outrageous levels in recent times. Both the U.S. and the EU recognize the PKK as a terrorist organization.

The YPG and other offshoots have been parading posters of PKK leader Abdullah Öcalan at every event they organize, chanting the same slogans as the PKK, such as "Biji Serok Apo" (Long Live Leader Apo), and openly confessing that their ideology is based on that of Öcalan's.

Even the CIA at one time officially recognized the YPG as the PKK's Syrian wing. In the Syria section of the CIA's "World Factbook," the agency listed the Syria-based Democratic Union Party (PYD) as a PKK branch in a list of foreign-based terrorist groups. The YPG is the armed branch of the PYD. The CIA's equation of the YPG/PYD with the PKK confirmed the U.S.' open support to a terror group.

Although the page was later changed, the Syria section continues to list the PKK under "foreign-based terrorist groups."

"Kurdistan Workers' Party (PKK): aim(s): advance Kurdish autonomy, political, and cultural rights in Syria, Turkey, Iraq, and Iran; area(s) of operation: operational in the north and east; majority of members inside Syria are Syrian Kurds, along with Kurds from Iran, Iraq, and Turkey (2018)," the section currently reads.

Many U.S. officials also recognized the links between the two groups, with some of them later backtracking to conform to the official U.S. stance. One of them was veteran politician Sen. Lindsey Graham, who loudly protested against Turkey's anti-terror operation despite earlier saying the U.S. had created the problem in northern Syria by arming the YPG.

Just a few months before Graham changed his tune, the senator had admitted that there was evidence of a "strong link" between the YPG and the PKK.

Graham held a news conference in February in Ankara and told reporters that there was sufficient evidence to prove that both organizations had links, adding that former U.S. President Barack Obama "created a nightmare" for Turkey by arming elements of the YPG that are "clearly tied to the PKK."