Turkey to repatriate most Daesh fighters by year-end, minister says 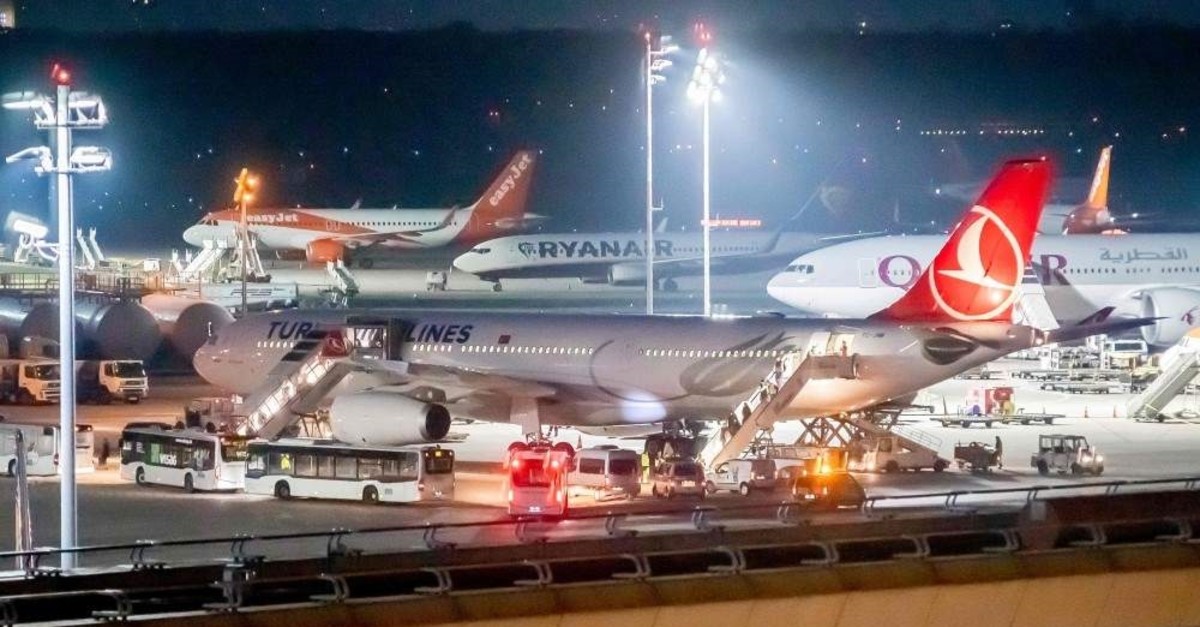 Turkish Airlines flight number TK1723 from Istanbul is seen in Tegel Airport, Berlin, Nov. 14, 2019 with a family on board deported by Turkey over suspected links to Daesh terror group. (AFP Photo)
by Compiled from Wire Services Nov 19, 2019 4:21 pm
Turkey will have repatriated most of its Daesh detainees to their home countries by the end of the year, Interior Minister Süleyman Soylu told Reuters on Tuesday, a week after Turkish authorities began the repatriation program.
Some 287 Daesh terrorists have been captured in northeastern Syria, where Turkish troops launched an anti-terror operation last month, and has hundreds more suspects in detention.
Speaking to Reuters in Ankara, Soylu said Turkey was aiming to send six or seven more Daesh suspects this week to their home countries, including Ireland and the Netherlands. Turkish officials are in touch with counterparts there, he added.
"The number of detainees to be repatriated by the year-end depends on how long the processes take, but especially for Europe, the process is under way," Soylu said.
"I think we will have sent a large part of them to their countries by the end of the year," he said, adding that certain countries that revoked the citizenship of their nationals were violating international law.
"They do not have the right to leave their citizens without a nationality. They have no such right," he said. "This is why we held evaluations with certain countries on this, and they are taking them back."
Turkey has criticized Western countries for refusing to repatriate their citizens who joined Daesh in Syria and Iraq, stripping some of them of their citizenship. Although the 1961 New York Convention made it illegal to leave people stateless, several countries including France have not ratified it, and recent cases have triggered prolonged legal battles. The U.K. alone has stripped more than 100 people of their citizenship for allegedly joining terrorist groups abroad.
eanwhile, European countries are trying to speed up a plan to move thousands of terrorists out of Syrian prisons and into Iraq.
So far Turkey has repatriated 10 German nationals, one U.S. citizen and one British suspected fighter. Ankara has said that suspects will still be deported to Ireland, France and other mostly European nations in the coming days.
Meanwhile, Sweden's security police are preparing for the deportation of alleged Daesh fighters with Swedish nationality from Turkey.
There exists "a small number" of imprisoned Daesh sympathizers who have connections to Sweden and could be affected by Turkey's deportation efforts, said Ahn-Za Hagstrom, an analyst with the Sapo security police, in an interview broadcast with Swedish radio Tuesday.
Hagstrom said the security police were preparing for the returns as best they could, with the identity of the potential deportees already known.
President Recep Tayyip Erdoğan said on Nov.8 that there are 1,201 Daesh terrorists in Turkish prisons.