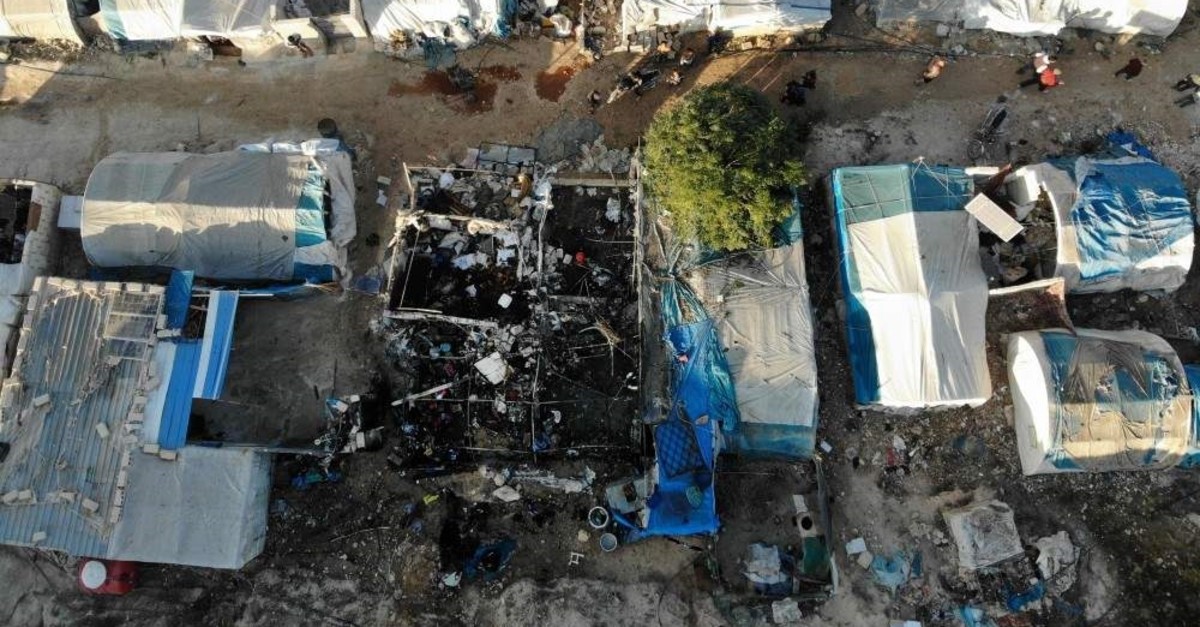 The charred remains of a tent following Syrian regime bombardment on a makeshift camp in the village of Qah near the Turkish border in Idlib, Nov. 21, 2019. (AFP)
by Daily Sabah with AA Nov 22, 2019 3:10 pm

Numerous Syrian regime attacks have caused massive destruction in Syria’s northwestern province of Idlib to the point that locals describe the horrors of the scenes as “genocide.”

The Qah camp in Idlib was hit by rockets on Wednesday by Iran-backed groups supporting the Bashar Assad regime in Syria.

“People fled in panic and others took refuge in the olive fields,” said one of the camp residents Ahmet Zidan to Anadolu Agency, adding that it was like a genocide scene.

The attack on the de-escalation zone killed 12 civilians, including children, and injured 40 others.

Another resident, Abu Ammar, said: "Regime forces started to bomb not just their homes but also the tents they took shelter in."

"Immediately after the attack, the tent camp, where about 500 families lived, was evacuated," Ammar added.

Turkey and Russia agreed in September 2018 to turn Idlib into a de-escalation zone where acts of aggression are expressly prohibited. The Syrian regime and its allies, however, have consistently broken the terms of the cease-fire, launching frequent attacks inside the zone. The de-escalation zone is currently home to some 4 million civilians, including hundreds of thousands displaced in recent years by regime forces from throughout the war-weary country.

According to a 10-year-old resident of the camp, Hüseyin Kalaaci, the scene was so terrifying that he thought he was already dead.

“When I was in the tent, the world turned red at an instance,” he said.

“The tents started to burn. I saw blood erupting from my dad and sister. My little siblings were crying. I thought I was already dead,” the young boy added.

Meanwhile, a U.N. official for the Syria Crisis "strongly" condemned the attack in a statement yesterday.

"I find it sickening that missiles hit vulnerable civilians, including elderly people, women and children sheltering in tents and makeshift shelters in a camp for internally displaced people," U.N. Deputy Regional Humanitarian Coordinator for the Syria Crisis Mark Cutts said.

"This horrific incident needs to be fully investigated. These camps are places where people who have already fled violence seek safety and shelter," he expressed.

International humanitarian law requires all parties to make a specific distinction between civilians and militants and to take constant precaution in carrying out military operations to save civilians, Cutts added.

Cutts said that as a result of the hostilities, over 1,000 civilian casualties including hundreds of children were reported by the Office of the U.N. High Commissioner for Human Rights in northwestern Syria since late April.

He said dozens of attacks against medical facilities and staff across Syria were also verified.

"I condemn this latest attack in the strongest possible terms. I call once again on all parties to the conflict to take all necessary measures to protect civilians and civilian infrastructure, in line with their obligations under international humanitarian and human rights law," Cutts said.

Yet, despite the condemnations and the existing deal between Turkey and Russia, the regime and its backers continue their attacks in the region, the latest of which occurred yesterday. Three civilians were killed as a result of the explosion of a bomb that was placed by Russia in the region. In a separate incident, two civilians were killed in Fattire village due to Russian airstrikes while five others were injured.

According to the White Helmets, 75 civilians, 13 of whom were children, have been killed during the attacks of the regime and its backers last month.

The Astana process on a peace settlement in Syria has turned into a front runner of a newly emerging Middle East architecture. Never envisaged to replace the Geneva talks on Syria, the Astana mechanism was launched in January 2017 as a supplement to the U.N.-sponsored peace process.