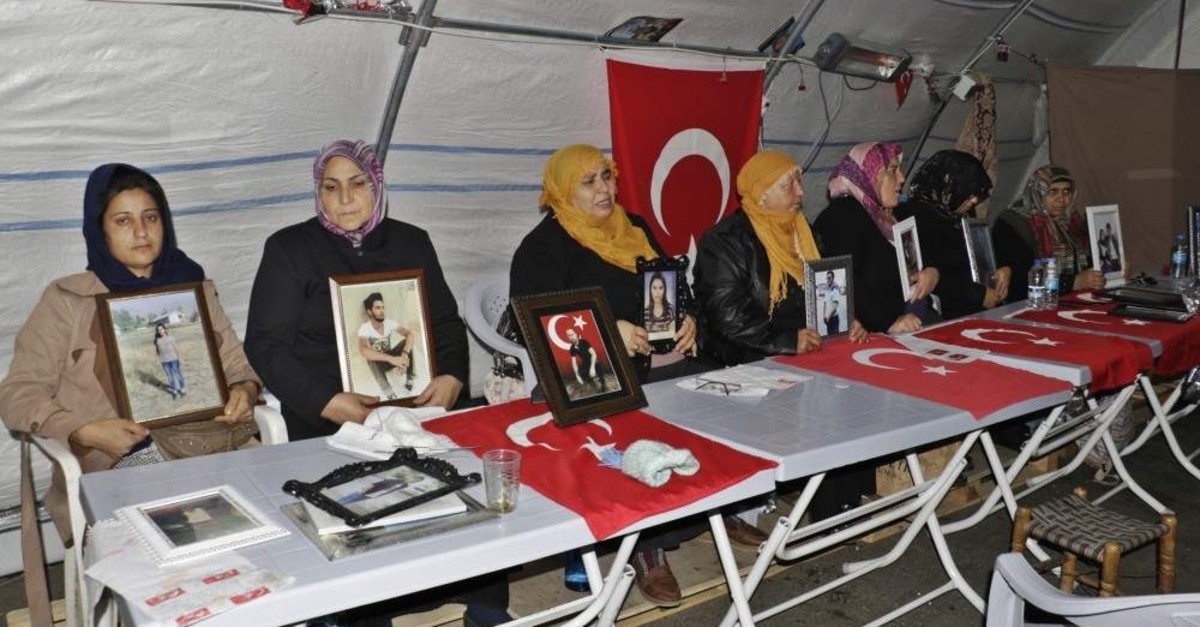 Kurdish families stage a sit-in protest in front of the HDP headquarters in Diyarbak?r with a demand for getting back their children kidnapped by the PKK, Dec. 5, 2019. (DHA Photo)
by Daily Sabah with Agencies Dec 05, 2019 9:21 pm

After losing her 20-year-old daughter to the PKK, a Turkish mother from Germany is determined to find her but was disappointed by the Berlin authority's lack of interest

“My Nilüfer was tricked by the PKK. I can’t reach her,” said Maide T., a German-Turkish mother who lost her 20-year-old daughter to the terrorist group.

A Berlin resident, Maide has been trying to find her daughter since Nov. 12, when Nilüfer was kidnapped by the PKK. Yet, all her efforts seem to be in vain as German police refuse to help her.

The sorrowful mother told Anadolu Agency (AA) that when she went to Berlin police for help, they told her they can’t do anything.

"The police told me they can only look for her if she joins the terrorist group because she is 20 and therefore an adult,” she said.

Maide urged the German authorities that her daughter was kidnapped by the youth branch of the PKK. “I will continue my fight to save my daughter from their [the PKK’s] hands,” she added.

According to Maide, everything started after Nilüfer joined a dance group.

“My daughter told me three years ago that she wants to join a folk dance group. At that time, I allowed her because I wanted her to socialize. However, after joining, she started to talk about politics a lot more,” Maide said.
She added that when these types of talks happened more and more, she forbid Nilüfer from going to the group that was operating under the name "Nevenda Kurdistaniyen Li Berline."

Despite its international status as a terrorist organization, the PKK has enjoyed relative freedom in European cities and has a particularly strong presence in Germany.

According to the German Interior Ministry, PKK followers committed more than 1,873 criminal offenses last year, an increase of more than 80% over the previous year, while violent offenses rose from 152 to 305.

Ankara has long criticized Berlin for not taking serious measures against the PKK and its affiliates in Germany, which use the country as a platform for fundraising, recruitment and spreading propaganda.

The PKK has waged a terror campaign against Turkey for more than 30 years and is responsible for the deaths of nearly 40,000 people, including women and children.

After realizing that her daughter was missing, Maide went to the association and asked her whereabouts.

“I told them ‘You have my daughter. Give her back.’ A woman told me that she will look for my daughter and get back to me. She said if she says ‘okay’ over the phone, it means they have my daughter,” Maide said.

Making it clear to the woman on the other end of the phone that she would never accept the ideologies of the terrorist group, Maide insisted that they return her daughter immediately.
“This is a struggle against the terrorist group. They can take her anywhere. I worry that they took her to the ideology camps in either France or Belgium,” she said.

Maide further added that a letter, allegedly from her daughter, was given to her by the association when she went there.

“My daughter is not very good at Turkish. It is very unlikely that she wrote the letter. The writing belongs to her but I realized that the words were dictated to her by someone else. It is obvious that there was a sample letter in front of her,” she said, adding that there were political remarks in the letter as well, which seemed out of place.

“Why would my daughter write me anything political?” she asked.

The PKK's use of child soldiers in its ranks has repeatedly been documented and criticized by international human rights organizations, including Amnesty International and Human Rights Watch. The group reportedly tricks families into giving up their children or kidnaps the children, taking them to training camps, where they are denied contact with their families.

According to a report published by AA in April, to ensure the commitment of the children, the PKK forces children and youngsters to do drugs, so they can later be used as suicide bombers and fight on the front lines.

Protesting for 95 days against the PKK

In Turkey’s southeastern Diyarbakır province, 58 Kurdish families have been staging a sit-in protest for 95 days now, demanding their children back from the PKK.

One of the fathers at the protests, Şeyhmus Kaya, said Thursday that he has been sitting in front of the pro-PKK People’s Democratic Party (HDP) headquarters since Sept. 5, demanding his abducted son be brought back to him.

Kaya’s 28-year-old son, Vedat was a police officer in Istanbul. He was abducted five years ago when he came to attend a wedding in Diyarbakır. On his way to the wedding, the PKK terrorists blocked his way and kidnapped him.

“There are no places left that we didn’t check. Enough is enough. We miss our children. They [the PKK] ruined our lives,” Kaya said, adding that he has not been able to think about anything other than his son for five years. Addressing the absence of HDP supporters or officials in the headquarters, Kaya said he is sure that they are also involved with the abduction even though they deny any wrongdoing.

Another protesting father, Salih Gökçe's son Mehmet was kidnapped four years ago. He said they have lost peace at home since the abduction.

“I cannot stand to stay at home. Whenever I prepare the table, I put a plate out for my son. What did they [the PKK] want from us?” he asked.

“People live for their honor, pride and children. I wish from God that the ones who did this will pay the price. I believe that justice will be served eventually,” Gökçe added.

The 12-year-old daughter of Vahide Çiftçi, on the other hand, was kidnapped two years ago in the Güvenli village of southeastern Hakkari province.

Çifçi said she had four children and one of them was killed in a car accident while Özlem, was kidnapped by the PKK. Çiftçi said she raised her daughter and sent her to school so she could get an education.

“I was sending her to school so she could become a police officer. However, the PKK kidnapped her. She was so young. I will continue to protest for my daughter until the end,” she underlined.

The sit-in protests are seen as a reaction against the outlawed PKK that has abducted and recruited children, as well as the HDP, which many of these families see as the PKK's partner-in-crime.

The protests began on Sept. 3 and have now continued for more than 90 days. Initially, the sit-in was launched by Hacire Akar in front of the HDP provincial organization in Diyarbakır last month. Akar wanted to see the return of her 21-year-old son Mehmet Akar, who had been missing for three days after he was abducted by the PKK terrorist group. Following her sit-in, Akar was finally reunited with her son with the help of security forces in Diyarbakır.