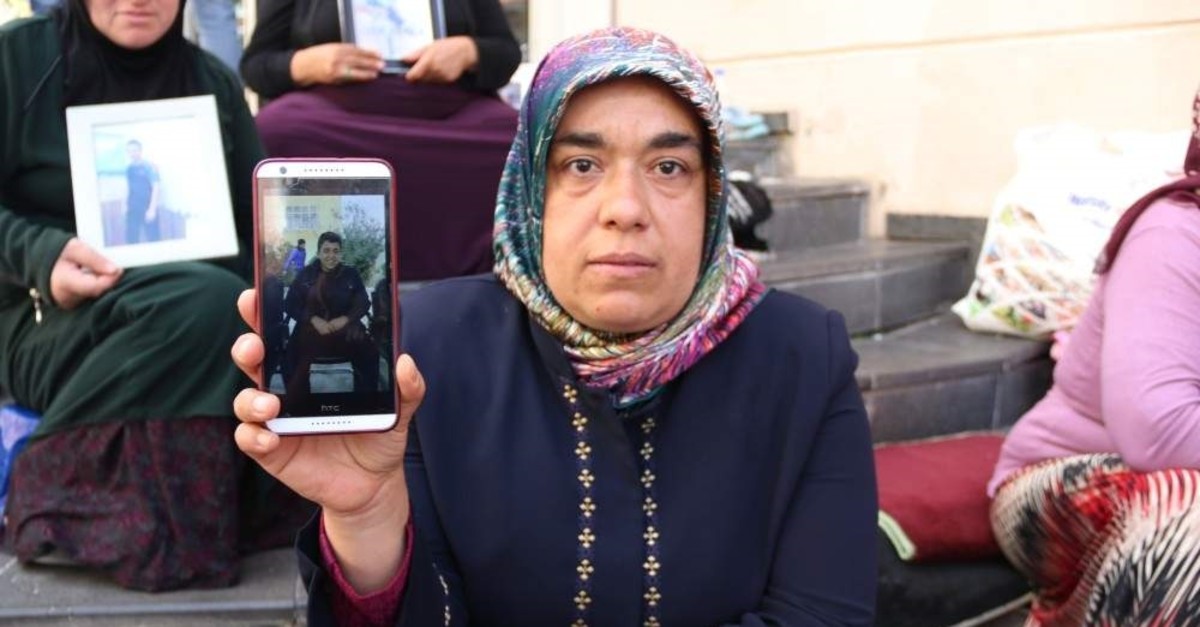 PKK terrorist Cafer Ceylan's mother Hatice Ceylan poses with his picture in front of the HDP HQ in Diyarbak?r during protests (AA File Photo)
by Daily Sabah with AA Dec 10, 2019 9:50 am

A PKK terrorist met with his family Tuesday amid his ongoing judicial process in southeastern Turkey, as they received a call from President Recep Tayyip Erdoğan, who congratulated the family.

Cafer Ceylan was persuaded to lay down his weapon and surrender in southeastern Diyarbakır province to Turkish security forces, who collaborated with his family.

Families began staging sit-in protests on Sept. 3 outside the offices of the pro-PKK Peoples' Democratic Party (HDP) in Diyarbakır.

One woman, Fevziye Çetinkaya, said her underage son had been forcibly recruited by PKK terrorists with the help of members of the HDP, which is accused by the government of having links to the terrorist group.

Since then, the number of protesting families has been growing as they demand the return of their children, who they say were deceived or kidnapped by PKK terrorists.

Hatice Ceylan joined the protests on Oct. 8 for her son, who was kidnapped four years ago when he was 15 years old.

Hearing that his mother had taken part in the sit-in, Cafer Ceylan decided to escape from the terrorist organization to reach his family.
Meanwhile, President Recep Tayyip Erdoğan called the Ceylan family to congratulate them on their son’s return.
In a video conference held Monday evening, the president spoke with Cafer Ceylan’s mother and father Abdülkadir Ceylan, the communications directorate said in a statement.
Interior Minister Süleyman Soylu also joined Erdoğan to congratulate the family.
Grateful parents thanked the president and the state for their efforts to ensure the safe return of their son from the terrorist organization’s camps, as both sides expressed warm wishes for a brighter future.

According to a statement by the Turkish Interior Ministry on Nov. 26, the dissolution of the PKK has recently accelerated thanks to successfully-conducted counterterrorism operations in Turkey and abroad.

Once the terrorists surrender, they are provided with many opportunities including the right to education and the freedom to live without fear and oppression.

They are not ill-treated, are able to contact their families freely and are provided with essential judicial assistance. The Turkish state offers a variety of services to ensure their integration into society.

According to their statements, the ringleaders of the PKK terror group risk the lives of other terrorists to save their own lives and threaten those planning to surrender with torture.

In its more than 30-year terror campaign against Turkey, the PKK – listed as a terrorist organization by Turkey, the U.S. and the European Union – has been responsible for the deaths of nearly 40,000 people, including women, children and infants. The People's Protection Units (YPG) is the PKK's Syrian offshoot.