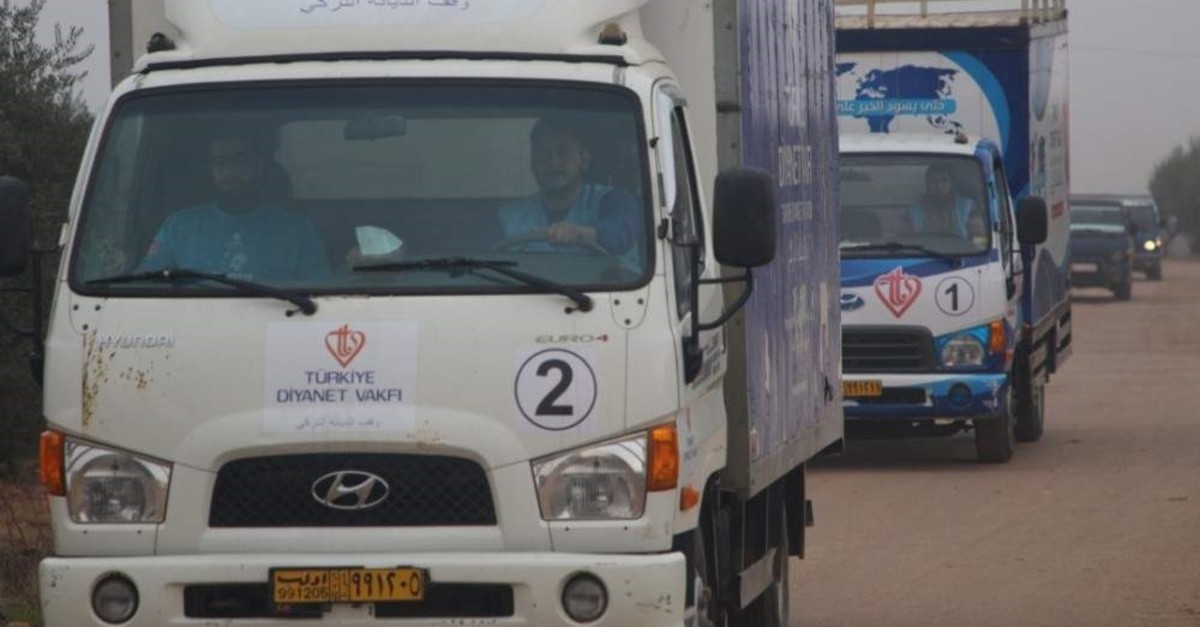 Turkey Diyanet Foundation (TDV) humanitarian aid trucks on their way to Syria after bombings of the Assad regime and its backers on civilians. (TDV - AA Photo)
by Daily Sabah Dec 25, 2019 2:59 pm

Since the civil war broke out in Syria, 979 humanitarian aid workers have lost their lives up, apart from the tens of thousands of civilians that have died and those who continue to be in dire humanitarian situations. According to the Syrian Network for Human Rights (SNHR), as of Dec. 20, 882 aid workers have died in Assad regime attacks and 97 in Russian attacks.

Furthermore, humanitarian relief facilities and vehicles were targeted 1,044 times by the Syrian regime and 403 times by Russian forces. Apart from the deaths, the regime also frequently blocks aid workers and aid efforts by detaining workers and bombing centers. Since the start of the war, 3,847 workers have been detained.

Syrians have also suffered in torturous regime prisons. According to a previous report by the SNHR this year, at least 127,916 civilians are being held in regime prisons while 13,983 people have died as a result of torture by regime forces.

"The Syrian regime has far surpassed the level of barbarism shown by many other violent and dictatorial regimes," the report said, adding that arrests and prosecutions of humanitarian workers as well as deliberate targeting and bombing of humanitarian organizations are common in the field. 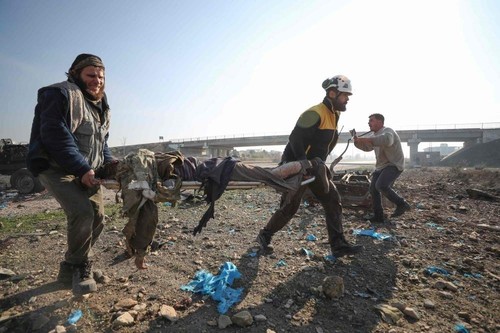 A white Helmet rescuer and a civilian carry the body of a victim following a Russian airstrike on the Damascus-Aleppo Highway near Maaret al-Numan in Syria's southern Idlib governorate on Dec. 22, 2019. (AFP Photo)

One of the most recent deaths of an aid worker was Mustafa Haj Abdo of the White Helmets civil defense group who lost his life yesterday.

Civil society organizations also recently published a joint statement that criticized the international community, saying that as some "safe countries" prepare for the Christmas holidays, people are dying in Syria. "The Syrian regime forces backed by the Russian air force continue to carry out their aggressive attacks on northern Syria and commit systematic war crimes on a daily basis against the Syrian people," it stated.

The report also mentioned the 2016 Urum al-Kubra attack on the Syrian Arab Red Crescent's aid convoy in Aleppo that killed 18 people. The U.N. was criticized for failing to thoroughly investigate the incidents and bring those responsible to justice.

Underlining that attacking humanitarian aid groups is a crime war, the report put forth that going unpunished will only encourage the Assad regime and Russia to continue such acts.

The right to health is a fundamental element of human rights which does not change in situations of conflict and violence. Access to medical assistance for the sick and wounded, whether they have been engaged in active combat or not, is guaranteed through various international agreements, including the Geneva Convention and the Basic Principles on the Use of Force and Firearms by Law Enforcement Officials of the United Nations.

Northwestern Idlib, as the last opposition enclave, is one of the most heavily attacked regions as it constitutes an important point for the regime, connecting the capital Damascus to Aleppo.

The Syrian civil war has killed hundreds of thousands of people and forced more than 5 million people to flee the country, while more than 7 million are internally displaced.

The civil war in Syria erupted in 2011 when the Assad regime harshly responded to protesters who had poured onto the streets to demand more rights and freedom. The protests initially emerged following the Arab Spring demonstrations, which pressured strongmen in Egypt, Tunisia and Libya to step down. The cruelty against protesters triggered a rebellion in significant parts of Syria, devolving into a brutal civil war before long. The fighting has caused hundreds of thousands of people, many of whom had already been displaced, to flee further north and seek shelter along the Turkish border.