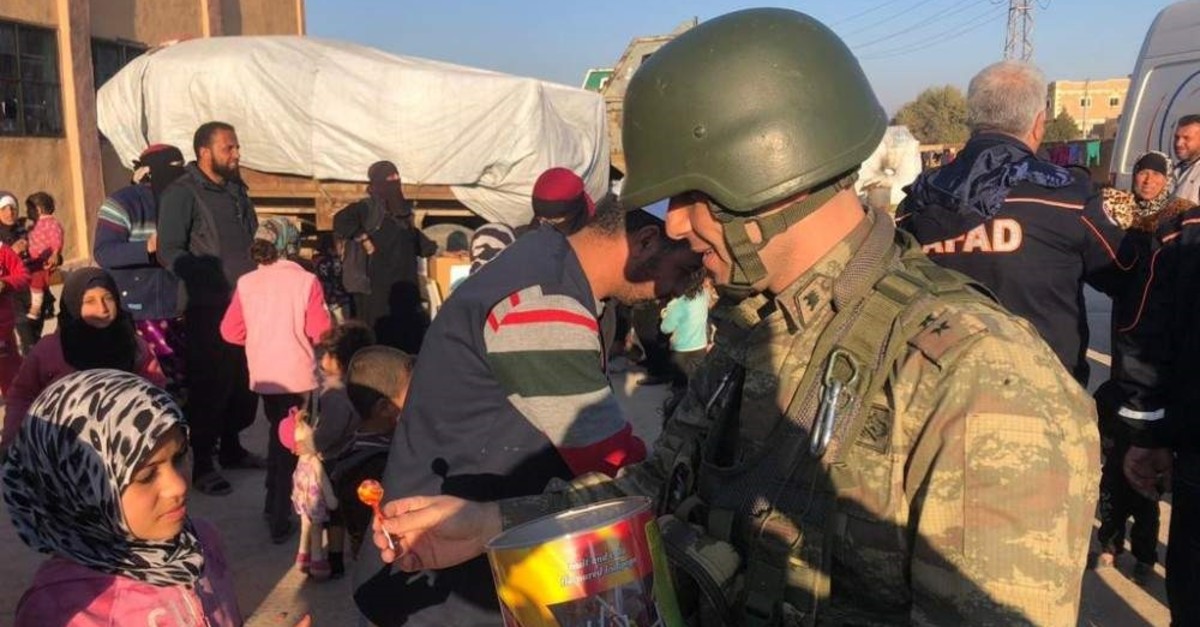 Turkish officials continue their efforts to provide humanitarian aid to local people in the liberated areas of northern Syria that were cleared of YPG terrorists in Operation Peace Spring.

In the video, soldiers at the checkpoints can be seen distributing hot drinks to people in the area cleared by Turkey's latest anti-terror operation.

"Our soldiers continue their search activities at the checkpoints in Operation Peace Spring area for the safety of life and property of our Syrian brothers," the ministry said on Twitter.

On Wednesday, the ministry shared another video showing Turkish soldiers distributing food and blankets to people fleeing from YPG oppression in Deir el-Zour to Tal Abyad. The distribution of humanitarian aid was carried out in coordination with the Turkey's Disaster and Emergency Management Authority (AFAD).

Operation Peace Spring put an end to the YPG's oppression and persecution in Tal Abyad and Ras al-Ayn regions, thus making way for Syrian people, who took refuge in Turkey, to return to their homes and lands voluntarily and safely.

Tal Abyad is populated to a great extent by Arabs and was occupied by the Daesh terrorist group in 2014. A year later, the PKK terror group's Syrian offshoot the YPG occupied the city with the support of the U.S.

Tal Abyad was cleared of terrorists as part of Operation Peace Spring on Oct. 13. Since then, locals have gradually returned with humanitarian aid being provided with the help of the Turkish Armed Forces (TSK) and the Turkish Red Crescent.

Thousands of people were given food and hygiene products and hundreds of others have been provided checkups.

In its more than 30-year terror campaign against Turkey, the PKK, listed as a terrorist organization by Turkey, the U.S. and the European Union, has been responsible for the deaths of 40,000 people, including women, children and infants. The YPG is its Syrian offshoot.