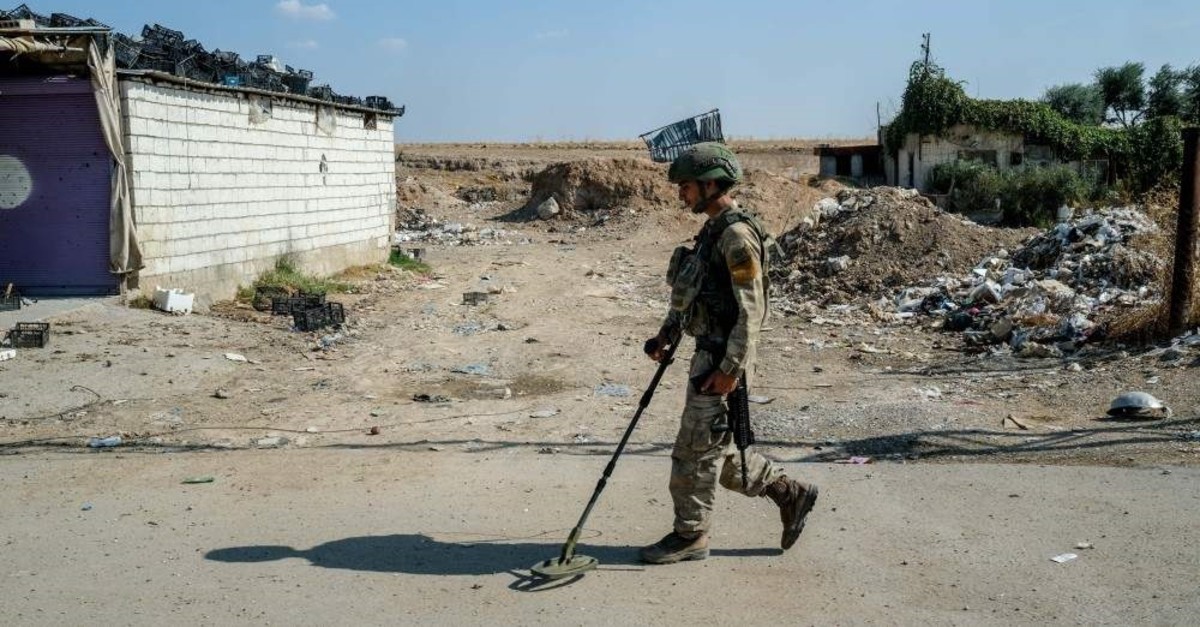 A Turkish soldier searches for mines as part of the security process to clear explosives planted by YPG militants in Tal Abyad, northern Syria.
by Mustafa Kırıkçıoğlu Jan 03, 2020 12:45 am

In order to facilitate the return of refugees and eradicate YPG threats, Ankara launched its third offensive in Syria and reached deals with the U.S. and Russia in October for a safe zone; nevertheless, developments on the ground signal sluggish progress

It was March when tensions around Turkey's border with Syria started to escalate after Ankara declared it would never allow the formation of a terrorist corridor along its southern borders. While massive deployment followed the declaration, the target of the statement was overt enough for anyone who follows Ankara's hot agenda regarding Syria. The YPG had geared up efforts to establish a statelet within Syria from Qamishli to Manbij by availing a power vacuum in the region due to the civil war. The situation was, needless to say, intolerable for Ankara as the YPG is an arm of the PKK terrorist organization, which has not only caused the deaths of 40,000 people in its nearly 40-year campaign against the state but has also posed an existential threat for Turkey with its separatist agenda.

The existence of the PKK-affiliated group was putting Turkey's national security in jeopardy. However, what became another thorny issue for decision-makers in Ankara was that the number of Syrian refugees had reached about 4 million. Turkish people and nongovernmental organizations have mobilized every means possible for refugees since 2011 as the total amount of money spent on the population surpassed $40 billion. Yet, once the economy was shaken in mid-2018 by a currency crisis, the government was faced with inevitable circumstances such as the disturbance among the population regarding the expenditure of an enormous amount of money for refugees. It was then that the Turkish government realized the necessity of taking swift action. Since all alternatives were clogged, the government intended to kill two birds with one stone by launching an offensive, which would solve the refugee problem with a safe zone area in northern Syria and work to eradicate the YPG problem.

Indeed, there was no need to reinvent the wheel. Ankara had been suggesting 30 to 40-kilometer a safe zone in northern Syria since 2012. The idea was to protect civilians from the regime attacks, prevent massive migration and avoid the thriving of terrorist groups. All three concerns came true as expected during subsequent years. The world started to look for a solution in a mad rush, only after the clashes went out of control and turned into a complex proxy war.

Despite being neglected for long years, Ankara insisted on this safe zone idea, explaining it to major world players. But after years-long negotiations with no results, Turkish officials have started to look for solutions on their own. President Recep Tayyip Erdoğan gave an end-of-September deadline for the actors on the ground, particularly to the U.S., to drive YPG terrorists away from Turkish borders, to facilitate the establishment of a safe zone. "If the safe zone east of the Euphrates with our own soldiers will not be established by the end of September, we will have no choice but to go about it our own way," said Erdoğan in early September while addressing crowds in the eastern Malatya province. His words turned out not to be a bluff when Turkish artilleries started their engines on Oct. 9. Since no concrete steps were taken by the interlocutors to soothe Ankara's national security concerns, Turkish boots were on the Syrian ground for the third time in three years.

The YPG's feeble resistance collapsed in five days. Two main towns of the region, Ras al-Ayn and Tal Abyad, were liberated on Oct. 12 and Oct. 13, respectively. YPG leaders fled in awe, abandoning their militants to their fate and blaming the U.S. in the chorus of "betrayal." The unsettled White House could only stand eight days of the rapid fall of their partners. On Oct 17., U.S. Vice President Mike Pence rushed to the Turkish capital to discuss the operation. After meetings with top Turkish officials, an agreement was reached, foreseeing a five-day pause in the offensive for the withdrawal of YPG militants from the planned safe zone. Five days later, Ankara inked another crucial deal with Moscow, which envisaged the YPG pulling back 30 kilometers south of Turkey's border with northern Syria.

Oytun Orhan, a political analyst and researcher at the Center for Middle Eastern Strategic Studies (ORSAM), stressed that both agreements seem good on paper, but there was a stern contrast on the ground.

"Russia's reluctance to expel YPG militants from the Turkish borders evokes previous sluggish agreements with the U.S. like the Manbij deal. Russia might try to mediate between Turkey and the YPG, a vain attempt which was once tried by Washington," Orhan said.

"Efforts for a non-armed solution are ongoing for now. However, if it won't bring expected results, Ankara may continue its offensive," he added.

As part of the agreement, Turkish and Russian troops launched joint ground patrols in northern Syria to observe the withdrawal process. However, sources from the region, just as many experts like Orhan, share Ankara's deserved worries – the activities of the YPG have ceased only in Turkey-controlled area.

Güray Alpar, a retired Turkish general and Institute of Strategic Thinking (SDE) analyst, told Daily Sabah that the implementation of a deal brings benefits not only for Turkey but also for the Russian side. "However, as we observe, the YPG's existence and terrorist activities continue near the Turkish border, which risks the deal," he said.

According to Alpar, developments in northwestern Syria's Idlib, which has already been exposed to a brutal campaign by the Bashar Assad regime and Russia, remains another sticking point. Reminding that the regime offensive may trigger a new refugee wave of hundreds of thousands of people, Alpar argued that destabilization in the region would negatively affect Russia as much as it would Turkey. "Apparently, the only person apart from Turkish officials that grasped the issue is Donald Trump," Alpar said.

The U.S. president tweeted last week: "Russia, Syria, and Iran are killing, or on their way to killing, thousands of innocent civilians in Idlib Province. Don't do it! Turkey is working hard to stop this carnage."

The regime's ruthless offensive, backed by the Russian air force and Iranian paramilitary troops, has already displaced nearly 300,000 people. The grave humanitarian conditions for the last shelter of about 4 million Syrians are getting worse every day. The EU has set its beseeching eyes on Turkey, hoping it will not open its doors and trigger a mass exodus to the continent. Ankara, on one hand, is seeking international support, while also pushing Russia, its main interlocutor in Syria, for a political solution.

"What Russia has now is a complete dilemma. It wants Idlib to be cleared of hostile factions like Hayat Tahrir al-Sham, while it also tries to influence the regime to limit the extent of the offensive. Russia neither desires a rupture with Turkey nor wants to draw a reaction from the refugee-weary EU," Orhan said.

He added that one of the primary aims of the offensive is taking control of the M4 and M5 highways, the main transport route in the northern part of the country.

Turkey, for now, is giving a chance to diplomacy in Idlib. But the regime military attempts to encircle Turkish observation posts pose significant risks, paving way for a confrontation, a situation both sides have been trying to avoid since the beginning.