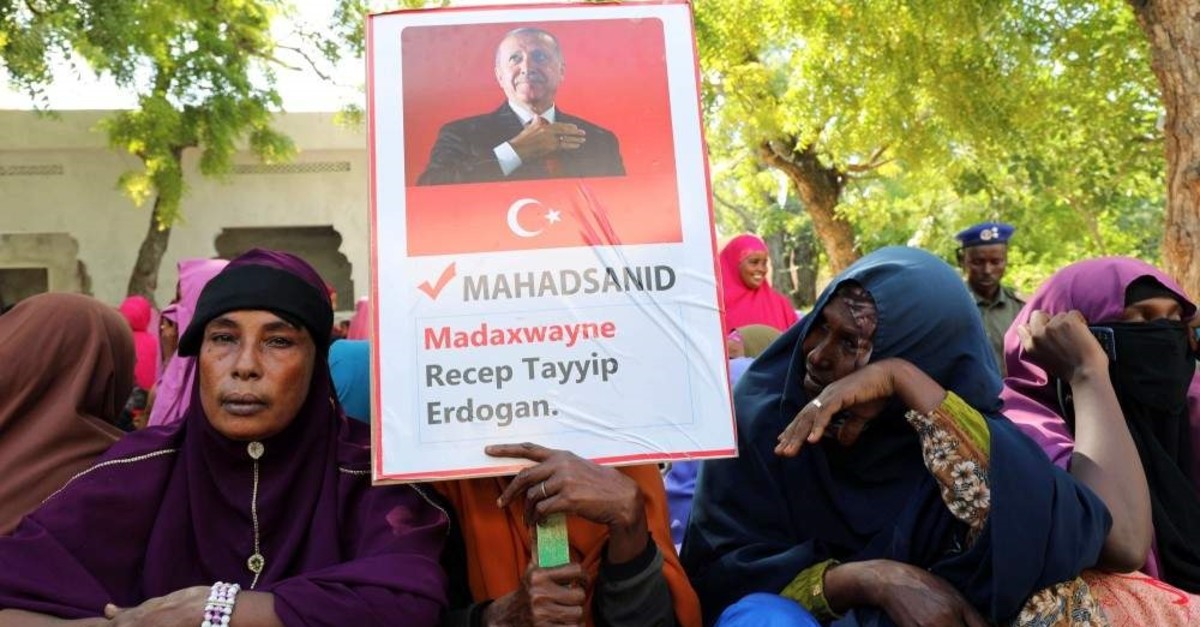 Somali women chant slogans and hold placards as they protest against the terrorist group al-Shabaab at the General Kahiye Police Academy in Mogadishu, Jan. 2, 2020. (AFP Photo)
by Daily Sabah with AA Jan 02, 2020 5:31 pm

Hundreds of Somali nationals took to the streets in the capital Mogadishu Thursday to condemn terrorism. The protests came after the Dec. 28 bomb explosion in Mogadishu that killed at least 81 people and wounded many more.

Holding placards, protesters condemned the attack and demanded strong action against the terror group. The main banner read: "Report al-Shabaab to the authorities, students are our future, Turks are our brothers, their blood is ours."

The Somalia-based al-Qaida-affiliated terror group al-Shabaab claimed responsibility for the bombing in an audio message two days after the atrocity. The bombing was the deadliest in more than two years in a country wracked by nearly three decades of terrorism and clan warfare. Two Turks were also among those who lost their lives in the attack.

A 35-year old mother of two, Fowiso Hani, told Anadolu Agency (AA) she was in the street to protest the attack. "I am here to express solidarity with the Somali people and our Turkish brothers. We want the whole world to help us fight al-Shabaab. They have no respect for Muslims, the Somali people or anyone,'' she said.

The terrorist group openly declared that Turks were the target. "The blast targeted a convoy of Turkish and Somali forces, and they suffered great loss," Ali Mohamud Rage, al-Shabaab's spokesman, said in the message. "The Turks are our enemies and as we have said before, we will not stop fighting until they withdraw from our lands," he said.

Turkey was one of the first countries to come to the aid of Somalia after the attack, providing a medical team of 20 people. The plane carrying the medical staff, including a national rescue team and surgeons, took off from Etimesgut Military Airport in the Turkish capital Ankara late Saturday and landed in Mogadishu early Sunday, Turkey's Defense Ministry said in a statement.

The same plane carried the bodies of deceased Turkish nationals Turan Sevi and Mehmet Kaplan and 15 people injured in the attack on its way back to the same airport in the capital Ankara. Most of those killed were university students returning to class.

"They (al-Shabaab) call our friends invaders. They spill our blood; they leave orphans and widows everywhere. We want the government to wipe them out completely," said another protester, Amina Khadiija.

The terrorist group carries out frequent bombings to try to undermine Somalia's central government, which is backed by the United Nations and African Union peacekeeping troops. The most deadly attack blamed on al-Shabaab was in 2017 when a truck bomb exploded next to a fuel tanker in Mogadishu, killing nearly 600.