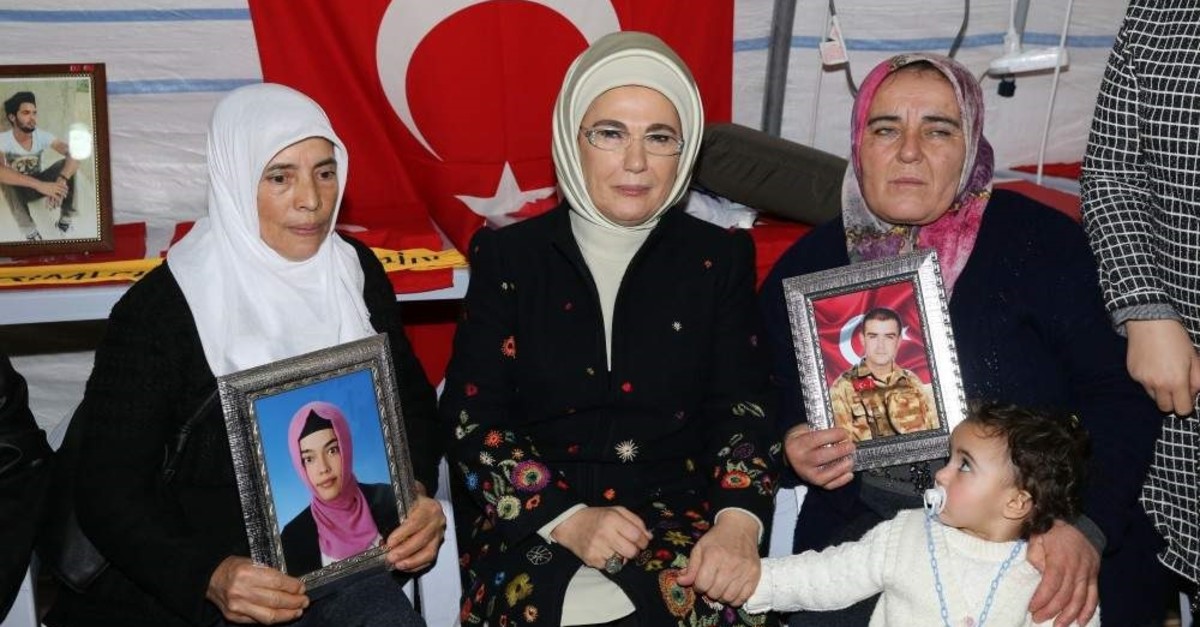 The unyielding stance of mothers protesting the PKK can change the course of history in the terror group's 40-year-long insurgency, first lady Emine Erdoğan said, referring to the Kurdish families who have been staging a sit-in protest in front of the pro-PKK Peoples' Democratic Party (HDP) headquarters in southeastern Diyarbakır province with the aim of saving their abducted children from the clutches of the terrorist group.

Speaking to the Sabah daily following her visit to protesting families in Diyarbakır on Tuesday, Erdoğan said that the day when Hacire Akar launched her sit-in protest in of front of the HDP headquarters in Diyarbakır was the day a new era started in Turkey.

"As has happened many times in history, we have seen that the power of a mother's heart overcomes politics, weapons and oppression – because mother Hacire was reunited with her son. The number of mothers demanding their childrens' return has increased with each passing day," Erdoğan said, adding that she went to Diyarbakır to support them and side with them.

Underlining the importance of dozens of mothers' efforts to demand their children back from the terrorist group, Erdoğan described the protests as "a stance that can change the course of history in the PKK's 40-year-old insurgency."

The first lady said that the movement brought solutions and some mothers were reunited with their children after many years of waiting.

"I think that this civil protest disrupted the terror group's chemistry, routine and agenda. Our officials state that (those who) escaped from the group have increased and the joining of the group has almost stopped. I believe that the torch lit by the mothers has enlightened local people in the region and increased societal awareness," she said, adding that no group's power will be sufficient to abduct children from their mothers anymore.

Stressing the impact of mothers' resistance on the psychology of the terror group's members, Erdoğan said that the all-time low rates of new membership in the terror group prove the success and rightfulness of the struggle.

On Tuesday, Erdoğan visited the Kurdish mothers who are protesting the PKK for allegedly abducting their children in southeastern Diyarbakır province. Showing support for the mothers' cause, Erdoğan's visit raised the sorrowful families' hopes for the new year.

During the two-hour visit, families expressed their gratitude to the first lady for her visit while reiterating their demands of being reunited with their children. The families said their hope has been strengthened by the meeting with Erdoğan.

"I believe with all my heart that the power of motherly love will defeat terrorism, weapons and oppression," Erdoğan said during her visit.

"I am proud of you," she said, expressing hope that all the mothers would reunite with their children.

It has been 122 days since mothers started protesting against the PKK terror group in front of the HDP headquarters. The families carrying out the sit-in hope to be reunited with their abducted children in 2020.

On the 122nd day of sit-in protests, tense moments were witnessed between party members and the families. While some party members were entering the building, they had encounters with the families protesting there.

The HDP is accused by the government of having links to the PKK, and accused by the protesting mothers of kidnapping or tricking their children to join the terror group. The HDP, long facing public reaction and judicial probes over its ties to the PKK, is under pressure due to this growing civilian protest movement. Various groups from around Turkey have supported the Kurdish mothers in their cause, with many paying visits to show their support.

Since the beginning of their protest, the mothers have received support from across the country with almost all segments of society expressing solidarity with their cause. Currently, a total of 63 families are participating in the protests.

The protest started when Akar turned up at the doorstep of the HDP's Diyarbakır office one night. A week later, on Sept. 3, 2019, families inspired by Akar transformed her solo stance into a collective sit-in protest. Akar's son Mehmet returned home on Aug. 24, showing other families that there is still hope.

Authorities have been supporting the sit-in, while Interior Minister Süleyman Soylu amped up efforts for the mothers. As a result, Mekiye Kaya, one of the abducted children, surrendered after fleeing from one of the PKK's camps in Iraq. Soylu called the family to deliver the good news.