Turkey carries out extensive operations against Daesh in 2019 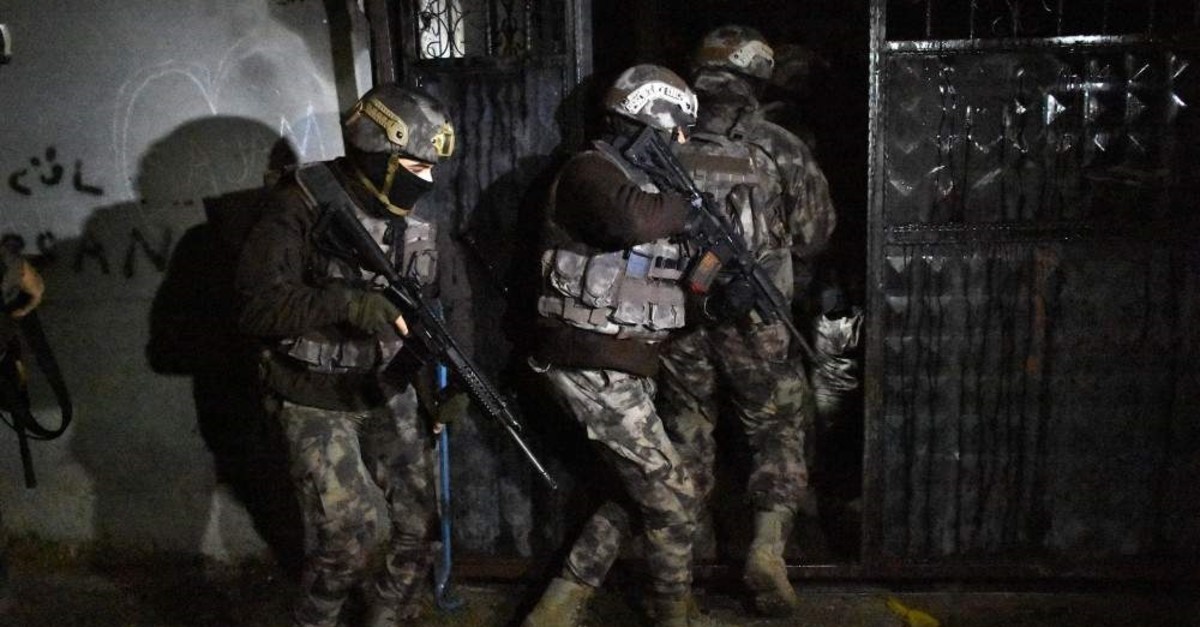 In 2019, Turkey carried out a strong fight to eradicate the presence of Daesh terrorists within the country and near its borders by arresting 2,820 suspects and imprisoning 457, including senior figures, in counterterrorism operations against the group. In both domestic and cross-border operations, many documents, weapons and armaments belonging to the terrorist group were also seized.

In January, 132 suspects were arrested and 36 of them, including the head of Konya province, were imprisoned in domestic operations. In an operation conducted in northwestern Bursa province, 12 Daesh terrorists, including two most-wanted figures by France, were caught.

In February, 212 suspects, including senior foreign figures, were arrested. Many documents and digital materials were seized during the search in the suspects' residences. Fifteen of the 212 suspects were imprisoned, and 22 more terrorists were killed during anti-terror operations within the month.

Imprisoned Daesh members included four terrorists, one from the red category of the country's most-wanted list, caught near the Syrian border and two most-wanted terrorists by Interpol caught in Bursa.

The Interior Ministry's most-wanted list is divided into five color-coded categories, with red marking the most wanted, followed by blue, green, orange and gray, depending on the sensitivity of their criminal activity.

During operations in April, 254 suspects were arrested, and 48 members were imprisoned. Thirty-two suspects plotting attacks in the capital Ankara and southern Hayat province were among those caught.

In May, 224 suspects were arrested, and 17 members were imprisoned. A senior figure codenamed "Abu M" was arrested in the southern province of Osmaniye and imprisoned. In the southern Adana province, four members in charge of weapons and bombs for the group were caught. During the month, many other senior figures were also sentenced to long prison terms.

In June's operations, 206 suspects were arrested, and 77 of them were imprisoned. It was revealed that two suspects caught in Adana illegally crossed the Syrian border and plotted a bomb attack.

A senior figure codenamed "Sebhen," who conducted some operations for the group in Iraq, was also caught in central Kayseri province.

In September, 120 suspects were arrested in Istanbul, İzmir and Gazintep, and 35 members, including senior figures, were imprisoned.

October's operations set a new record when 410 suspects were arrested, and 40 of them were imprisoned. In a total of 26 operations against Daesh members plotting bomb attacks targeting the Oct. 29 Republic Day celebrations, 100 suspects were caught in 21 provinces.

In December, 333 suspects, including senior figure M.E., were arrested. Between Dec. 30-31, a total of 184 suspects plotting terror attacks on New Year's Eve were arrested in 15 provinces.

There are still more than 1,000 foreign Daesh members being held in Turkish prisons, with nearly 300 having been detained over the course of Turkey's current anti-terror operation in northern Syria. The arrests include relatives of Daesh members.

Although the 1961 New York Convention made it illegal to leave people stateless, several countries, including Britain and France, have not ratified the agreement, with recent cases triggering a number of prolonged legal battles. The U.K. alone has stripped more than 100 people of their citizenship for allegedly joining terrorist groups abroad.

Turkey has taken measures against foreign fighters since the beginning of the Syrian civil war in 2011. According to judicial sources, over 76,000 people have been banned from entering the country, and over 7,000 linked to terrorist groups or fugitives have been deported.