More than 300,000 Syrians displaced in a month due to regime attacks in Idlib 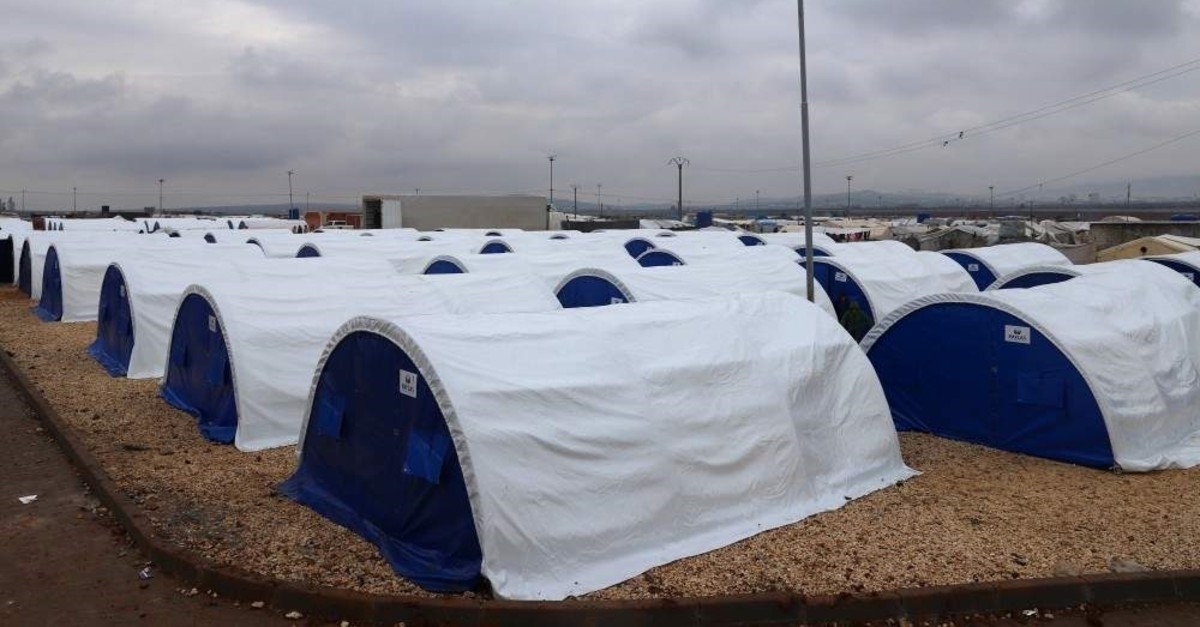 More than 300,000 civilians were forced to leave their hometowns and flee for their lives due to violent attacks by the Russia-backed Bashar Assad regime on Idlib's de-escalation zone in Syria, Interior Ministry Süleyman Soylu said Tuesday.

Reports noted that 31,000 more civilians who fled Idlib have been moving toward the Turkish border in the last four days.

The United Nations on Tuesday voiced alarm about the deteriorating humanitarian situation in northwest Syria due to the unrelenting violence targeting the area.

"At least 300,000 civilians have fled their homes in southern Idlib since mid-December, following a sharp escalation in hostilities," Mark Cutts, United Nations deputy regional humanitarian coordinator for the Syria crisis, said in a statement.

"This brings the total number of people displaced by fighting in Idlib in the last eight months to over 700,000," Cutts added.

"Many are now sheltering in schools, mosques and other public buildings. Critical shortages of food, shelter, health and winterization assistance, as well as other basic services required for survival, are being reported across Idlib," the statement said.

It added that at least 13 health facilities in Idlib have recently been forced to suspend their operations due to the security situation. Schools, a kindergarten and a mosque were also targeted in the airstrikes, it added.

The U.N. statement called on all parties to the conflict to take all necessary measures to ensure the protection of civilians.

While the need for humanitarian aid dramatically grows with the increasing number of displaced civilians near the Turkish border, a Turkish aid group has provided tents to 135 internally displaced families who fled violent regime attacks.

The Istanbul-based Humanitarian Relief Foundation (İHH) responded to the needs of refugees near the Turkish border who have escaped the bombings in Idlib and are now suffering severe winter conditions.

The Syrian regime has continued with airstrikes and artillery fire targeting civilian settlements in the Idlib de-escalation zone, where acts of aggression are expressly prohibited.

"Recently, there has been a mass influx of refugees from Idlib to the towns of Azaz and al-Bab due to the intense attacks," said Hasan Aksoy, a logistics personnel member of the aid group.

In the last one month, at least 20,000 people fled Idlib to border towns, he added, underlining that the families often bring no belongings with them.

In these areas, the Turkish Red Crescent also provides tents, food and other humanitarian aid to the displaced Syrians who fled from regime attacks to save their lives.

On Oct. 9 Turkey launched Operation Peace Spring to eliminate YPG terrorists from the area east of the Euphrates river in northern Syria to secure Turkey's borders, aid in the safe return of Syrian refugees and ensure Syria's territorial integrity. 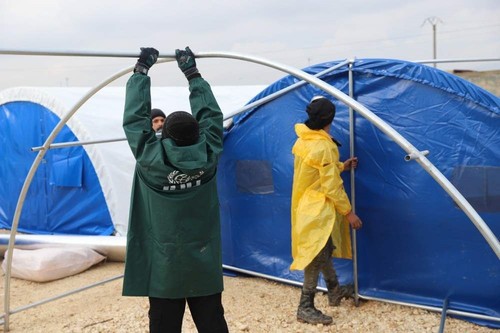 Turkey has also carried out two cross-border operations targeting the area west of the Euphrates – Operation Euphrates Shield launched in August 2016 and Operation Olive Branch in January 2018 – to drive terrorist groups, including the YPG/PKK and Daesh, from its borders.

Since then, Turkey has ramped up efforts to get daily life in these areas back to normal and make the local people's return to the region possible. As the Defense Ministry announced last month, nearly 580,000 Syrians voluntarily returned to the areas cleared of terrorist elements through Turkey's three cross-border operations.

Ankara has also proposed the establishment of a safe zone in northern Syria cleared of all terrorist elements to allow the resettlement of Syrians who have fled to Turkey from war-torn areas. Turkey's safe zone plan aims to host millions of Syrians in a safe and stable environment.

On Dec. 20, the regime and its allies launched a military campaign mainly in the cities of Maarat Al-Numan and Saraqib as well as the surrounding rural areas, capturing 35 residential areas.

The latest reports reveal that at least 253 people were killed and 250 others were injured in Idlib in December alone.

According to a report released by the Syria Intervention Coordinatorship on Friday, more than 328,000 civilians have fled their hometowns since November due to regime attacks in Idlib. With the latest reported migration wave, this number reached at least 359,000.

Airstrikes on the region were halted following a visit to Moscow by a Turkish delegation led by Deputy Foreign Minister Sedat Önal on Dec. 23.

More than 1,300 civilians have been killed in attacks by the regime and Russian forces in the de-escalation zone as the cease-fire continues to be violated. Over a million Syrians have moved near the Turkish border following intense attacks. If aggression by the regime and its allies continues, Turkey and Europe face the risk of another refugee influx.

According to the National Coalition for Syrian Revolutionary and Opposition Forces, Idlib province, the last opposition stronghold in Syria, is home to around 3 million civilians, and 75% of them women and children.

The U.N. has warned of the growing risk of a humanitarian catastrophe in the region, which lies along the Turkish border.

After almost nine years of conflict, forcible displacement and torture, Syria is one of the countries in the world in the greatest need of humanitarian aid. Despite the efforts of many nongovernment organizations from around the world as well as countries like Turkey, the amount of aid reaching the war-torn country is still not at desired levels, prompting the international community to come up with new initiatives to solve the problem.