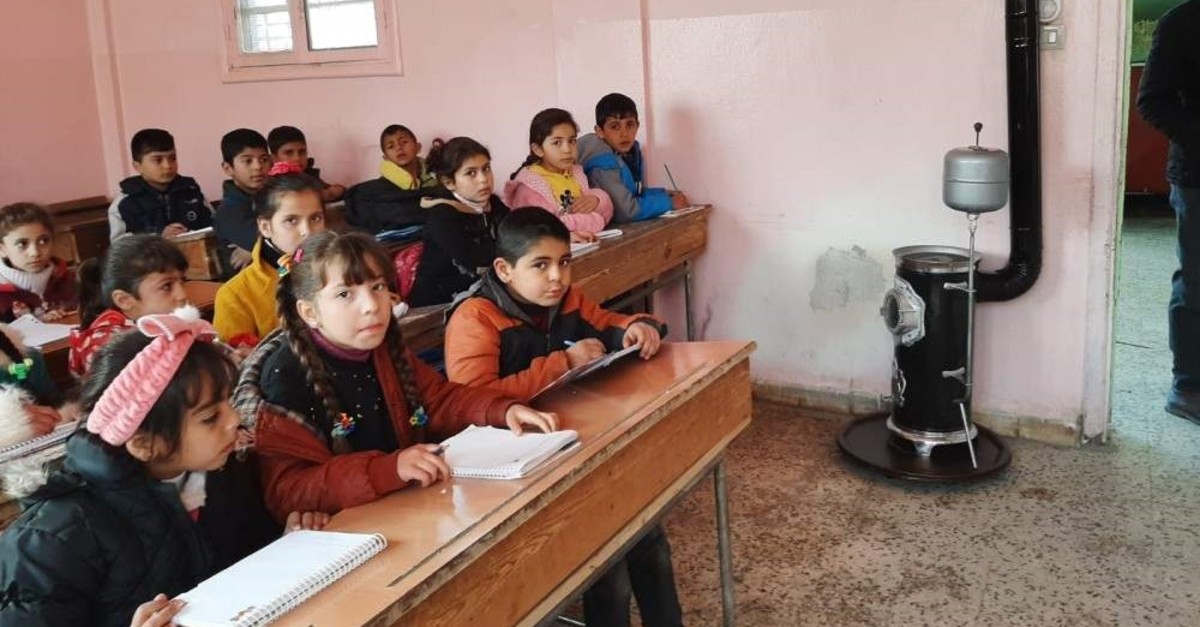 Following Operation Peace Spring, 7,222 students have resumed their education in northern Syria's liberated areas. (AA Photo)
by Daily Sabah with AA Jan 23, 2020 2:12 pm
Students in the northern Syrian provinces of Ras al-Ayn and Tal Abyad, deprived of education for years due to terrorism, have resumed their studies as the normalization of the area continues following its liberation from terrorist organizations thanks to Turkey's Operation Peace Spring.

As of Thursday, 963 teachers working at 180 schools have begun to shape the future of 19,470 students in both provinces. The schools are offering compensatory lessons to make up for the lost time while aiming to enhance the quality of education.

According to the Şanlıurfa governorate, 45 schools damaged by terrorists in Ras al-Ayn have been restored as part of Turkey's humanitarian aid efforts. This has enabled 7,222 students to start their studies in the province. Institutions deployed by Şanlıurfa's Syria Support and Coordination Center (SUDKOM) have helped equip the schools in terms of basic student needs, such as stationary equipment, uniforms and schoolbags. Accordingly, 371 classes are now being administered by 319 Syrian teachers. The schools were also given 150 heating stoves and 5,940 liters of fuel by Turkey's Disaster and Emergency Management Authority (AFAD).

The students, who previously had to stop attending school due to the terrorist occupation of the province, are happy to have since returned.

One of these schools, Al Afaf Elementary, was converted into one of the main headquarters of the PKK's Syrian affiliate YPG for the region. The building was left in a dire state following the group's withdrawal, with terrorist paraphernalia found hung all around it. However, electrical lines have since been restored and desks and classrooms cleaned.

Samir Hammud, responsible for education in Tal Abyad, told Anadolu Agency that books have now been distributed to all schools. "In the upcoming days, all students will receive their books," he said.

A teacher at one of the schools, Nurettin Muhammed, said: "We have students ranging from first grade to sixth. The children care about going to school. Many children who have come to Tal Abyad due to internal displacement receive education together with locals from the province. We are trying to meet the needs of the students."

Tal Abyad and Ras al-Ayn were liberated in October 2019 after four and a half years of terrorist occupation of the area.

As Syrian refugees continue to return to their home towns in northern Syria's liberated regions, another 200 families have since returned to Tal Abyad.

"Two hundred families returned yesterday," Tal Abyad customs assistant manager Velid Heviş said, adding that public order had been established by security officials in the region. He also called on people forced to migrate to Turkey and other Syrian provinces to return to their homes

Ebu Ahmed, a citizen who came home after six years, advised others to return and thanked Turkey.