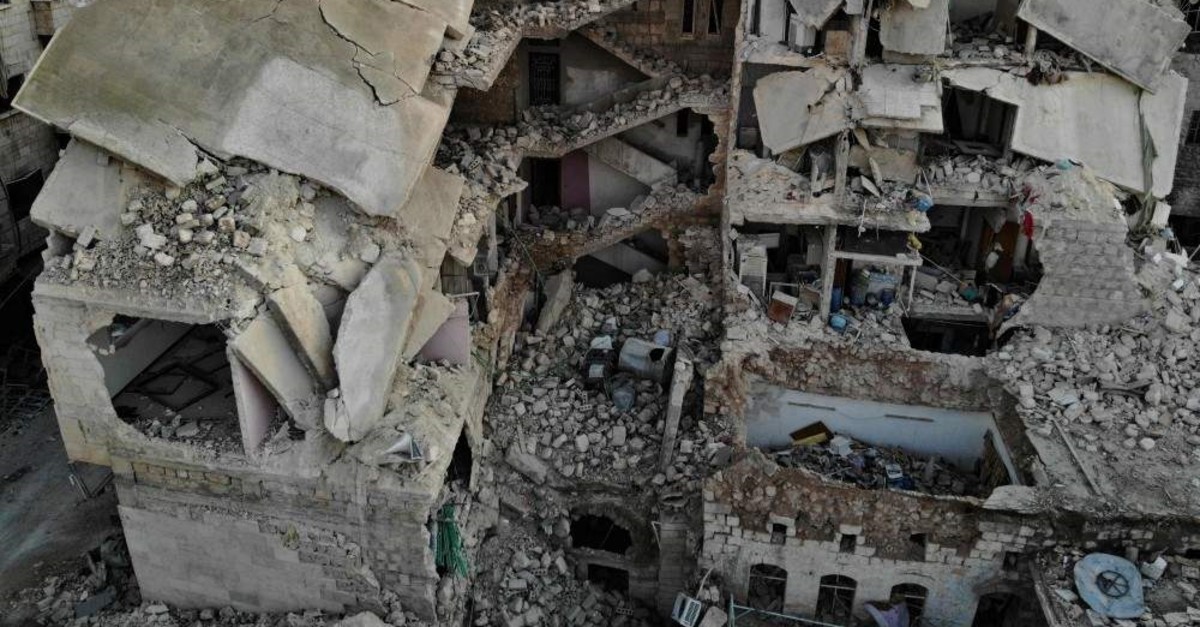 An aerial view shows a heavily damaged residential building that was hit during recent air strikes by pro-regime forces in the city of Maarat al-Numan in Syria's northwestern Idlib province, on Jan. 25, 2020. - Regime forces, backed by Russian warplanes, have increased their attacks on southern Idlib since December, displacing more than 358,000 people, according to the U.N. (AFP Photo)
by Daily Sabah with Agencies Jan 26, 2020 6:37 pm
The Bashar Assad regime has seized seven more settlements in Syria’s northwestern Idlib province as part of the regime's vow to regain control of the last opposition stronghold and forces have reached the outskirts of a key city on the edge of the province, the Syrian Observatory for Human Rights (SOHR) said Sunday.
They have now reached "the edges of the city and are... within gunfire range of part of the highway," the U.K.-based war monitor said, referring to the mainly deserted city of Maarat al-Numan.
Maarat al-Numan is a key town on the M5, a main highway linking Damascus to Syria's second city Aleppo, and is one of the largest urban centers in Idlib.
Over the past 24 hours, Syrian regime ground forces have seized seven villages on the outskirts of Maarat al-Numan, the SOHR said on Sunday while pro-regime newspaper Al-Watan reported that loyalist forces were "just around the corner" from the city, whose "doors are wide open." As a result of the latest assaults, Syrian regime forces now control around 70% of the country.
After Syrian regime forces backed by Russia largely seized control of Maarat al-Numan’s southern settlements, the bombardments recently intensified in eastern and northern rural areas. Thus, there are 3 kilometers left for Assad regime forces to reach the town from the east, and 10 from the north as clashes between opposition forces and those loyal to Assad continue.
The conflict in Idlib dates back to the beginning of the civil war, as the province slowly turned into a hub for the opposition and later became the only opposition stronghold in the whole country. Idlib, which received massive migrant flows through internal displacement and reached a population as large as 4 million, was taken over by opposition forces in 2015 for the first time. Since then, it has become a continual target for regime attacks.
31,000 flee toward Turkish border
Another 31,000 Syrians have fled toward areas near the Turkish border as the assaults by the Assad regime and Russia on civilian settlements continue in spite of an already fragile humanitarian situation.
“More than 71,000 people had to escape their homes to outrun death in the last 10 days due to the brutal bombardment by Russian and regime forces. Most of these civilians were from the western countrysides of #Aleppo, regions previously considered the safer areas to reside in,” the White Helmets civil defense groups stated in a tweet early Sunday.
The Assad regime and Russia generally conduct their attacks under the pretext of fighting al-Qaida-linked Hayat Tahrir al-Sham (HTS) terrorists holed up in Idlib.
"The ceasefire signed by Russia was a lie. 94 people, including 32 children, have been slaughtered in the last 10 days alone in #Idlib and #Aleppo northern #Syria. Those lives were lost after #Russia arbitrarily disregarded by the ceasefire and began killing again," the White Helmets added on Twitter.
The Idlib de-escalation zone has seen a surge in violence and attacks on civilians by the Assad regime and its backers despite a cease-fire brokered through the efforts of Turkey. Ankara announced on Jan. 10 that a new cease-fire in Idlib, the third failed attempt of its kind, was set to start just after midnight Sunday, Jan. 12.
However, only days after the announcement, Russian jets struck several opposition-held towns in Idlib, witnesses and sources said. They said the towns of Khan al Subl, Maasaran and several others in the southern Idlib region were targeted after a two-day lull in aerial strikes against the last opposition bastion that had been pounded for over a month in a renewed assault.
Hundreds of thousands of people have fled Idlib province in recent weeks as Russian jets and Syrian artillery pounded towns and villages in a renewed Syrian regime assault aimed at clearing the opposition.
Senior U.N. officials said this month that the humanitarian situation had become more acute with at least 300,000 civilians now on the run in Idlib province, adding to the more than half a million people who fled earlier bouts of fighting to the safety of camps near the Turkish border.
Turkish institutions and nongovernment organizations have stepped up their efforts for the humanitarian disaster recently as many displaced individuals live in harsh conditions lacking basic necessities. Hundreds of trucks of humanitarian aid have been sent, camps have been built, and work on permanent housing facilities continues.
Aid agencies and relief groups have warned that further violence could fuel what may potentially become the largest wave of displacement seen during Syria's nine-year-old civil war.
Turkey, as the country hosting the largest number of Syrian refugees in the world, has long been striving to achieve peace and stability in the country, calling on international actors to take action against the humanitarian disaster that is unfolding there each day. Turkey has also frequently warned other countries of a new refugee wave that would happen if relentless attacks on the de-escalation zone continue.
Russia hits Idlib hospital
Amid ongoing attacks on civilian settlements, Russia and the Assad regime hit a hospital in Idlib on Sunday, according to the White Helmets. The civil defense group said that Russian warplanes targeted the Iman hospital, which is providing services to 50,000 civilians. They announced that there were no deaths or injuries since the hospital was evacuated before the attack, but that the hospital is now unusable.

Medical facilities have been hit especially hard during the conflict as the Assad regime and Russia do not differentiate between ordinary buildings and health facilities during attacks. The World Health Organisation (WHO) has frequently voiced that several hospitals and health care centers have had to suspend work and evacuate the area for their own safety.