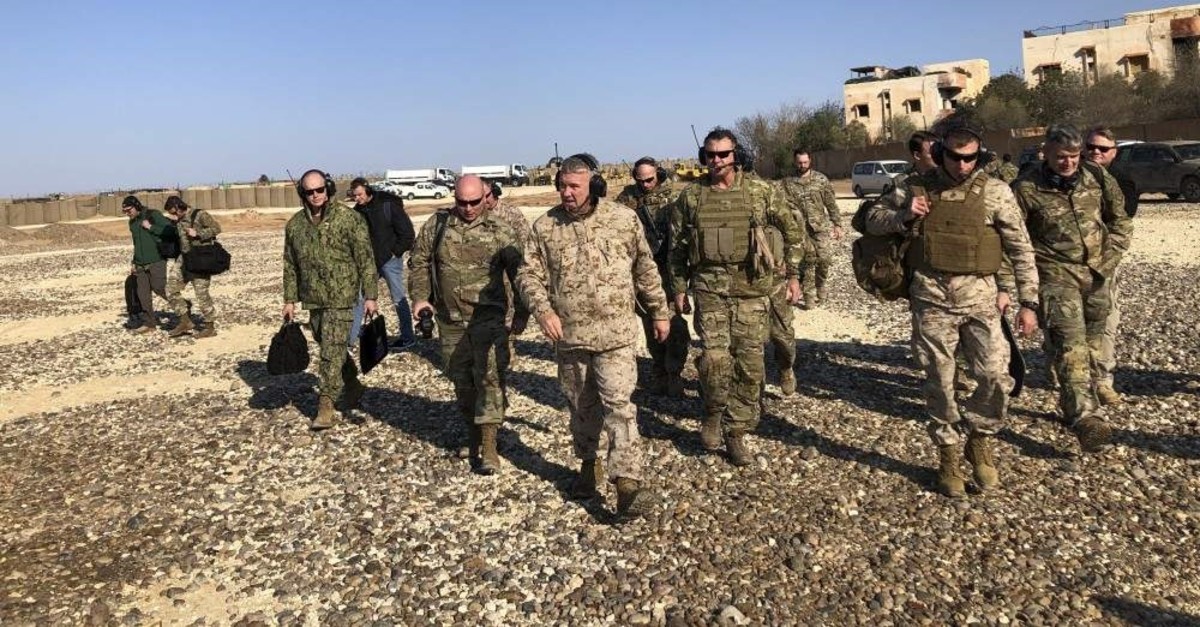 AP Photo
by Daily Sabah with AP Jan 26, 2020 6:18 pm
The future of U.S. troops in Syria remains uncertain as Gen. Frank McKenzie, the U.S. Middle East commander, said Saturday that American forces will continue to be in Syria for awhile.
In an unannounced tour of five military bases in Syria stretching from the northeastern part of the country to the Middle Euphrates River Valley, McKenzie offered reassurances that the U.S. remains committed to its mission in Syria. He said that operations against Daesh terrorists are on the rise again, after the U.S. cut back due to increased tensions with Iran and the need to concentrate on increasing security.
U.S. troops were initially deployed in Syria for the mission of defeating Daesh. Although U.S. President Donald Trump declared a decisive victory over the Daesh terror group and launched the withdrawal process of American soldiers in December 2018 – saying defeating Daesh was the sole reason for American presence in the country – the Trump administration adjusted that mission last year by assigning several hundred U.S. troops to remain to guard oil fields from the terror group, which used Syrian fuel as a key income source during its rise.
In these uncertain times, America’s mission to train and partner with YPG/PKK terrorists-led SDF in the fight against the Daesh terror group has been tested.
But at least for today, McKenzie said: “This is an area where we made a commitment. I think we’re going to be here for a while.”
In October, Trump had again announced a withdrawal of U.S. forces from northern Syria, ahead of Turkey’s Operation Peace Spring to eliminate YPG/PKK terrorists from the area east of the Euphrates in northern Syria to secure Turkey's borders, aid in the safe return of Syrian refugees and ensure Syria's territorial integrity.
Over time, his military commanders, members of Congress and other leaders convinced Trump to keep a scaled-back force in Syria to protect an expanse of YPG/PKK-controlled oil fields and facilities from falling into the hands of Daesh. So while some troops did leave Syria, the Pentagon ordered others to move into the east, with armored vehicles and security forces to guard the oil.
According to officials, there are now about 750 U.S. troops in eastern Syria, spread across a swath of land that stretches more than 150 kilometers from Deir el-Zour to the border region east of al-Hassakeh.
U.S. Defense Secretary Mark Esper confirmed that the mission of U.S. troops in the region also includes preventing Russian and regime forces from taking control of Syrian oil, in addition to guarding against Daesh terrorists.
The YPG/PKK-led forces began taking over control of major oil fields in the northeast of Syria and along the Euphrates from Daesh terrorists in 2017. Although Operation Peace Spring in northern Syria has resulted in YPG/PKK terrorists losing significant amounts of territory, most of the oil fields east of the Euphrates remain under the terrorist group’s control.
Despite NATO ally Turkey's legitimate security concerns, the U.S. has partnered with the SDF in its fight against Daesh in northern Syria.
In its more than 35-year terror campaign against Turkey, the PKK – listed as a terrorist organization by Turkey, the U.S. and the European Union – has been responsible for the deaths of nearly 40,000 people, including women, children and infants. The YPG is the PKK terrorist organization’s Syrian offshoot.
McKenzie, who also met with the senior YPG/PKK terrorist, Ferhat Abdi Şahin code-named “Mazloum Kobani,” at an undisclosed military base in eastern Syria Saturday morning, said Şahin wanted assurances that the U.S. would continue to help his fighters.
His answer, McKenzie said, was that the U.S will continue to conduct anti-Daesh missions and help protect the oil fields. But, he said, he did not put a deadline on it.
“He knows, and I agree, that we’re not going to be here for 100 years," McKenzie said during a stop at Green Village military outpost, east of Deir el-Zour. “I frankly don’t know how long we’re going to be here, and I have no instructions other than to continue to work with our partner here.”
McKenzie crisscrossed the east, flying by helicopter over long stretches of desert flecked with intermittent patches of green and scattered villages. It was his first trip to the five bases.
In recent months, there have been growing concerns that the Daesh insurgents are regrouping, particularly in the west, where U.S. forces are not present.
Operations against Daesh, however, were interrupted in recent weeks, in the aftermath of the U.S. drone strike that killed a top Iranian general in Iraq. Fearing reprisals by Iran and Iranian-backed proxy forces, the U.S. paused or slowed operations to beef up security in Iraq and Syria. Iran, after several days, launched ballistic missiles at two military bases in Iraq where U.S. troops are stationed. Several dozen were diagnosed with traumatic brain injuries, but no one was killed in the attacks.
According to officials, U.S. operations against the Daesh terror group in Syria were reduced by half over that time. But as McKenzie took stock of the situation during his day-long sprint across eastern Syria he said that has now changed.
RELATED TOPICS