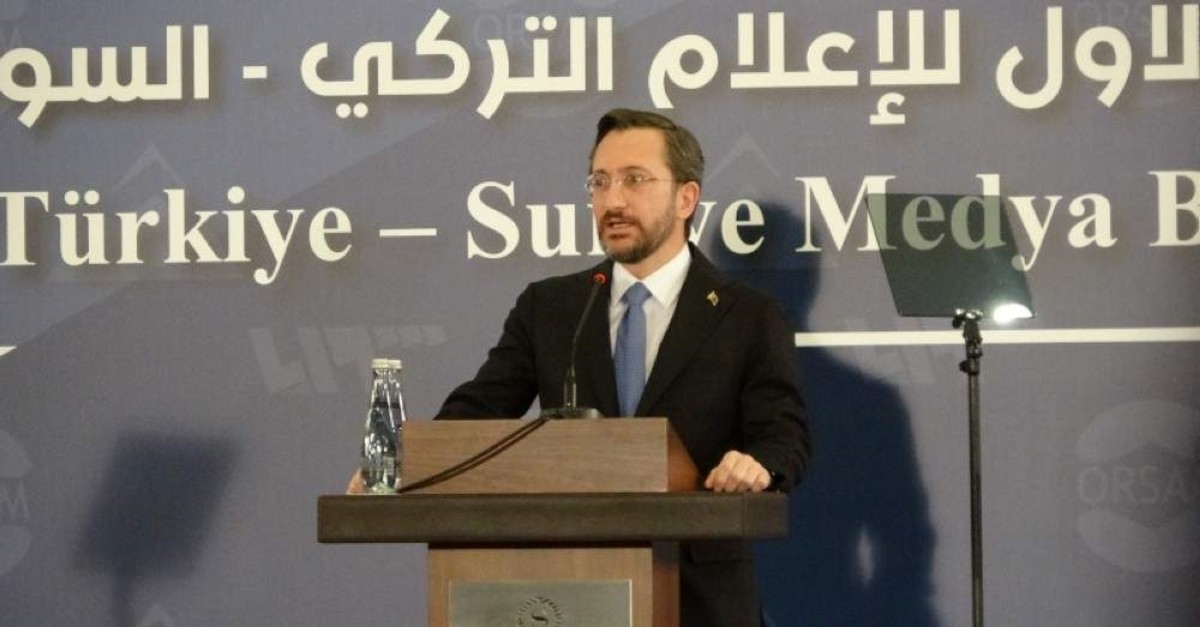 The Turkish Presidency’s Communications Director Fahrettin Altun said Saturday that Ankara could not tolerate current developments in Idlib, vowing to bring the regime to account for the onslaught in Syria and in the name of the Turkish soldiers who died as a result of attacks targeting a convoy on Monday.

“The future place of Bashar Assad, who tried to impinge upon our flag, is not the Presidential Palace but the International Court of Justice at The Hague,” Altun told the participants on the 1st Turkey-Syria Media Meeting held in Istanbul.

Eight Turkish soldiers were killed and several others injured in the regime attack west of the strategic town of Saraqib, which was captured by regime forces on Thursday after a weeklong assault. Defense Minister Hulusi Akar said at least 76 regime soldiers were killed in retaliatory fire.

“It is not possible to establish lasting peace in Syria before the regime is deactivated,” Altun said, saying that for Turkey, the primary cause of the crisis in Syria was the Assad regime, unlike other views that hold regime change as a secondary issue to the fight to combat terrorism.

Altun noted that the regime is responsible for massacring the Syrian people, prompting a humanitarian crisis and a refugee influx and redesigning the region through terrorism.

"I'd like to point out that the terror corridor that was attempted to be established along Turkey's border by the PKK/YPG has served as a dagger behind Syria's legitimate opposition throughout this process. Large swathes of land were gifted to the terrorist group without a single bullet being fired. We know very well how this bloodthirsty terrorist group that has targeted our citizens for the last 40 years has served as a buttress for the regime at every opportunity," he added.

“We will continue to work both on the field and at the negotiating table to put an end to these proxy wars in the upcoming period. We don’t only aim to just maintain our national security but also to invalidate the diabolical siege plans on the region,” Altun said, warning that a larger refugee influx would reach Europe if the process across the border was not ended, referring to the clashes in Idlib.

Sources also confirmed that due to the regime attacks, three observation points in the region – point seven, eight, and nine – are currently under siege by regime forces.

Turkey remains the country with the most refugees in the world, hosting more than 3.7 million migrants since the start of the Syrian Civil War.