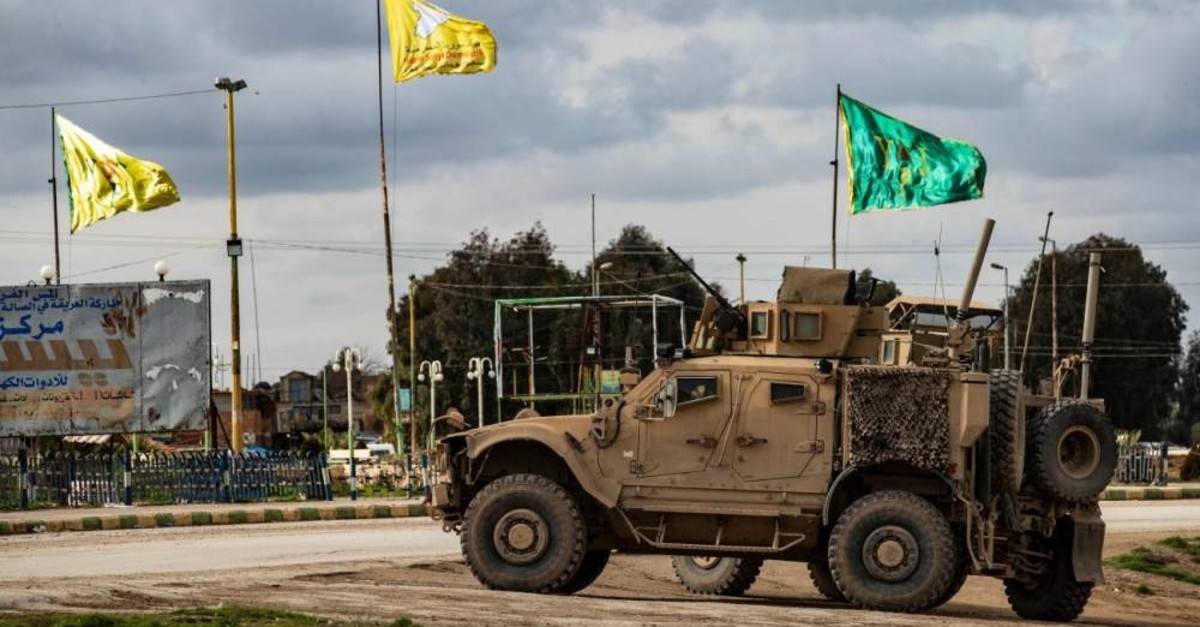 A patrol of US military vehicles is seen near the flying yellow flags of the terrorist YPG-dominated SDF and green flags of its constituent YPJ in the town of Tal Tamr in the northeastern Syrian Hasakah province along the border with Turkey on Feb. 8, 2020. (AFP Photo)
by Daily Sabah with Agencies Feb 11, 2020 11:37 am

The $740.5 billion Pentagon budget proposed by the U.S. government will continue to provide funding for YPG/PKK terrorists in Syria but it will slash it by a third compared with the previous year, while it includes more funding for nuclear weapons, research and development spending.

The Trump administration's proposal will slash funding for the YPG/PKK-dominated SDF to $200 million from $300 million in 2020.

The SDF is an umbrella organization predominantly led by the terrorist PKK's Syrian wing YPG.

The proposed budget cuts funding for other combat operations abroad, including Iraq and Afghanistan.

American support for the YPG, under the name of the SDF, has long vexed Ankara. Turkey considers the YPG to be the Syrian offshoot of the PKK terrorist organization, which has waged a more than 30-year brutal war against the Turkish state.

Washington views the SDF as a "reliable partner" in its fight against Daesh and continues to provide it with arms and equipment in the face of strong objections by Turkey.

The defense spending request contains the Pentagon's largest research and development budget in 70 years, a senior defense official said, as the military aims to build next-generation capabilities to counter the growing strength of China and Russia.

Within the Pentagon's competing priorities, the request for nuclear weapons modernization funds rose 18% compared with last year, adding $29 billion more to the budget, a second senior defense official said. Fully modernizing the U.S. nuclear triad will cost more than a trillion dollars over 30 years, according to the Congressional Budget Office.

The funding will go to better nuclear command and control as well as delivery platforms like the Columbia Class nuclear submarine made by Huntington Ingalls Industries and General Dynamics and the certification to carry nuclear bombs aboard the stealthy F-35 jet fighter made by Lockheed Martin Co.

The U.S. Navy budget decreased by 1%, or $1.9 billion, to $207 billion, and the Air Force had a slightly higher budget as the Trump administration increased the number of orders for KC-46 refueling tankers to 15, from 12. The Boeing Co. program has been troubled by cost overruns and problems with the construction process.

Trump's proposal calls for 79 F-35 jets, one more than requested last year. But Congress last year increased the F-35 purchase number to 98 from 78 in the budget they passed.

The U.S. Missile Defense Agency (MDA), charged with the mission to develop, test and field a ballistic missile defense system, is examining an additional layer of homeland defenses. Their budget of $9.1 billion includes funds to develop a prototype THAAD interceptor missile for defending the lower 48 states.

The MDA budget would also help fund the expansion of the Ground-based Midcourse Defense (GMD) system, a network of radars, anti-ballistic missiles and other equipment designed to protect the United States from intercontinental ballistic missiles.