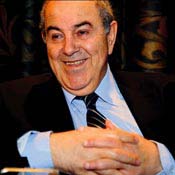 The leader of the Iraqi bloc that came first in elections accused Iran on Sunday of trying to destabilize Iraq and manipulate the political process as he jeered at rival politicians seeking Tehran's blessing for forming the next government.

BAGHDAD – Ayad Allawi, a secular Shiite, narrowly won the most seats in the March 7 vote with strong Sunni backing but did not get nearly enough to control the government outright. That allowed his chief rival, Prime Minister Nouri al-Maliki, to sideline the Iraqiya political party that Allawi heads by forming a Shiite-dominated alliance similar to the current government and close to Iran.

"I won't be begging Iran to agree upon my nomination," Allawi told the Al-Arabiya satellite TV channel.

He added that Iran should get out of Iraqi politics and "not impose or support one faction over the other."

Allawi's remarks were a clear jab at al-Maliki, who heads to Iran on Monday as he scrambles for enough Shiite support to keep his job. There were also new indications that al-Maliki's efforts to enlist Sunni allies in the region are falling short. The king of neighboring Jordan pointedly avoided endorsing the Iraqi prime minister for a second term in a statement Sunday.

The developments injected new doubt that Iraq's political mess will be resolved any time soon. It has been more than seven months since parliamentary elections that failed to produce a clear winner and the country is still without a government.

Allawi has threatened to boycott the next government if al-Maliki remains in office, although U.S. diplomats are trying to broker a detente that would give the Iraqiya leader some power and key ministry jobs if he backs down.

Al-Maliki recently clinched support from hardline Shiite political parties close to Iran. With that, and assuming he is backed as expected by a key Kurdish coalition, he will have enough allies to remain in office.

In a second television interviews aired Sunday, Allawi accused Iran of fomenting unrest in Iraq, Lebanon and among Palestinians. He said Mideast nations are "falling victim to ... terrorists who are definitely Iran-financed."

"We know that unfortunately, Iran is trying to wreak havoc on the region," Allawi said. "And definitely in Iraq, I can say categorically that Iran is trying even to bring about change to the political process according to their wishes and requirements," he told CNN's "Fareed Zakaria GPS."

But the prime minister dearly wants support from Sunnis too — in part because of strong pressure from the United States to foster a new government that represents all Iraq's major political factions. He will visit Turkey and Egypt next week.

But his trip Sunday to Amman fell flat after Jordan's King Abdullah II withheld public endorsement for al-Maliki's bid for a second term in office.

A royal palace statement said Abdullah told al-Maliki in a closed-door session that it was "necessary to form a government that would reflect the aspirations of the Iraqi people and would effectively build a better future for them."

But Abdullah clearly sought to remain neutral, emphasizing to al-Maliki that it was up to Iraqis to pick their government.

"Jordan supports anything that would lead to achieving reconciliation between the Iraqi people and would consolidate their national unity," Abdullah added, according to the statement.

Arab states have been deeply concerned about the influence of Shiite power Iran in Iraq and across the Middle East. Jordan's ruler has been a particularly vocal critic of the Shiite-led government in Baghdad. In 2004, Abdullah warned about the emergence of a "Shiite crescent" including Iran, Iraq, and Lebanon.

Ahmadinejad called the Jordanian king last Tuesday. The state media said discussions focused on Iraq and other regional matters, but did not elaborate. Government officials declined to say if Ahmadinejad asked Abdullah to support al-Maliki.

In other developments, a brazen midday heist on three jewelry stores and at least four bombings in Baghdad left nine Iraqis dead and 13 injured in a fresh round of brutal crime that has swept the Iraqi capital over the past year as political violence has ebbed. Iraqi authorities have frequently blamed insurgents for the devastation, saying they are hard up for cash and have turned to crime to raise money for other types of attacks.

Additionally, the U.S. Embassy in Baghdad issued a new warning Sunday that Americans and other Westerners who live and work in Iraq — and especially in Baghdad — may be kidnapping targets. The statement followed similar warnings on Sept. 14 and Sept. 25 that cautioned U.S. citizens from traveling in Iraq's mostly Shiite south. The new warning "applies to all parts of Iraq, especially Baghdad," the statement said. It comes a day after an Iraqi Defense Ministry spokesman warned of threats against local and foreign journalists working in Iraq.