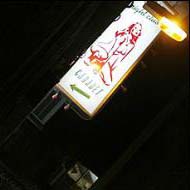 Cypriot radio stations are working together to put the spotlight on the victims and crack down on customers of a thriving sex trade on the divided island despite some timid visa reforms.

NICOSIA, Cyprus—"I came to Cyprus to work as a waitress. That is what they told me. Now they force me to sleep with clients! I am not a prostitute. They force me to do it," said a woman speaking on Radio Astra, owned by Cyprus's ruling Akel party.

A condemnation follows: "Human trafficking is a serious violation of human rights. The tolerance and use of victims' services is our complicity."

The plan to enlighten Cypriots was launched two years ago when the government abolished "artiste" visas for "dancers," often from eastern Europe, in any of the 100 or so cabarets that the holiday island used to have.

Since then, the Greek Cypriot authorities in the government-controlled south of the island, which joined the European Union in 2004, say there are only 44 of the clubs left.

"The interior minister has changed the rules and now it's better," said Neophytos Neophytou, deputy editor-in-chief of Radio Astra.

"But it's still important to inform Cypriot society, especially the young people, to teach them the difference between (consensual) prostitution and trafficking."

But experts in the field say Cyprus's abolition of artiste visas—around 3,000 were issued in 2007—has made barely any difference at all, instead moving the problem elsewhere, mostly to bars and massage parlors.

"The truth is that two years ago they sold girls with artiste visas, and today they sell them with work visas," said Androulla Henriques, vice president of ACESS-Suisse, an organiZation combating sexual exploitation.

In a report on human trafficking, the US State Department warned in June against the dangers involved in granting special visas to performing artists and waitresses in Cyprus.

And in a letter to Interior Minister Neoklis Sylikiotis, EU High Commissioner for Human Rights Thomas Hammarberg urged Cypriot authorities to "ensure that no type of visa or work permit can be abused for such unlawful purposes as trafficking human beings."

Half the applications for work permits are turned down, according to the interior ministry, which says it demands proof of the artists' qualifications and now requires that they come as part of a group.

The bars are no longer allowed to employ non-European waitresses.

"They changed the name of the visa, the name of the contract, but the situation hasn't changed: The women are still here, and the risk of trafficking also," said Susan Pavlou of the Mediterranean Institute for Gender Studies.

She believes the clients, most of whom are married Greek Cypriots according to her organization, should be prosecuted.

Cyprus is also having to contend with a new phenomenon: street prostitution, with Filipinas, Chinese, and Vietnamese women offering themselves, day and night, for just a few euros, non-governmental organizations say, to pay back immigration networks.

In the Turkish-held north of the island, the situation is even more troubling.

Henriques described the "appalling life" of foreign women in the north who are deprived of their freedom, singling out the garish nightclubs dotted along the westbound motorway out of northern Nicosia.

In its June report, the State Department said nearly 1,000 "hostess" work permits were issued last year in northern Cyprus, which has 42 nightclubs, adding that the authorities had no procedures to identify trafficking victims.

Sener Elcil, secretary general of the union of Turkish Cypriot teachers, said the police in northern Cyprus do nothing to prevent people trafficking, and are even colluding with the organizers.

"Turkey is responsible for these (cabaret) activities. The mafia rules the northern part of the island, and police do nothing. Even worse, they're involved, they hold the passports of the girls when they arrive."