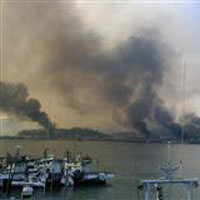 SEOUL, South Korea (AP) — The skirmish came amid high tension over North Korea's claim that it has a new uranium enrichment facility and just over a month after North Korean leader Kim Jong Il unveiled his youngest son Kim Jong Un as his heir apparent.

South Korea's YTN television said one South Korean marine was killed and that two people were injured. The report said several houses were on fire and shells were still falling on Yeonpyeong island, which is about 60 miles (100 kilometers) west of the coast. The station broadcast pictures of thick columns of black smoke rising from the island.

President Lee Myung-bak ordered officials to make sure that the firing wouldn't escalate, according to Yonhap, quoting a presidential official. YTN said between 1,200 and 1,300 people live on the island, citing an island resident.

A South Korean Joint Chiefs of Staff official said dozens of rounds of artillery landed on the island and in the sea. The official says South Korea fired back. The official, who spoke on condition of anonymity because of JCS rules, said South Korea's military is on alert. He had no other details, and could not confirm the reports of casualties.

Tensions between the two Koreas have remained high since the sinking in March of a South Korean warship in which 46 sailors died. Seoul blamed a North Korean torpedo, while Pyongyang has denied any responsibility.