At UN, groups cite gains against land mine deaths 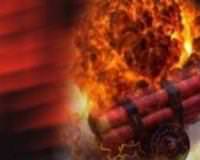 Advocacy groups say at least 3,956 people died last year because they stepped on a land mine or other unexploded devices left behind in war, the lowest number since counting began nearly a dozen years ago.

Associated Press= GENEVA (AP) — The report issued Wednesday at the United Nations by Mines Action Canada, Human Rights Watch and other groups cited the casualty rate and record amount of contaminated land cleared of mines as major progress toward a land mine-free world.

Eighty percent of the cleared areas were in Afghanistan, Cambodia, Croatia, Iraq and Sri Lanka.

India, Myanmar and Pakistan are believed to be the only three nations still making anti-personnel mines, and military-ruled Myanmar, also known as Burma, was the only government confirmed as using them, the report said. But "non-state armed groups" in six countries — Afghanistan, Colombia, India, Myanmar, Pakistan and Yemen also use land mines, it said.

This was the first time that Russia was not also listed as a government that is a land mine user since the groups' Landmine Monitor was created in June 1998 by the Nobel Peace Prize-winning International Campaign to Ban Landmines.

The report was issued in advance of a meeting starting next week to discuss the 199 Mine Ban Treaty.

"The record progress made in the past year toward eliminating anti-personnel mines shows that the Mine Ban Treaty is working," said Mark Hiznay of Human Rights Watch.

The treaty has been signed by 80 percent of the world's nations. China, India, Pakistan, Russia and the U.S. are among 39 nations that have not yet joined it, though the Obama administration is reviewing that stance.

The U.S. donates $119 million of the $449 million in international funding for anti-land mine action.

The report said 86 nations had finished destroying their stockpiles of anti-personnel mines, but several nations including Belarus, Greece, Turkey and Ukraine failed to meet their treaty deadlines for destroying stockpiles.