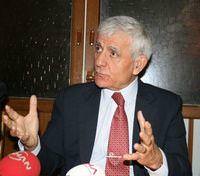 Turkey’s Islamist-rooted prime minister “simply hates Israel” on religious grounds, a US diplomat says in a cable, part of thousands of secret documents published by the WikiLeaks internet site.

The paper is a summary of a conversation with Israeli ambassador to Turkey, Gabby Levy, about Recep Tayyip Erdogan's frequent outbursts against Israel following the Jewish state's devastating war on the Gaza Strip last year.

"Our discussions with contacts both inside and outside of the Turkish government on Turkey's deteriorating relations with Israel tend to confirm Levy's thesis that Erdogan simply hates Israel," the cable said.
Levy reportedly dismissed domestic political calculations as the motive behind Erdogan's hostility, and instead attributed it to the prime minister's Islamist background.
"He's a fundamentalist. He hates us religiously and his hatred is spreading," Levy was quoted as saying.

The cable concluded that Erdogan's "antipathy towards Israel is a factor" in his policy on Iran's nuclear programme and other Middle East issues.
It was dated October 2009, before Turkish-Israeli ties plunged into a full-blown crisis on May 31 when Israeli forces killed nine Turks on a Gaza-bound aid ship.

Shortly afterwards, Turkey voted "no" to fresh sanctions against Iran, adopted by the UN Security Council, insisting that a nuclear fuel swap deal it hammered out with Tehran, together with Brazil, should be given a chance.

Another cable revealed by WikiLeaks, dated November 2009, said Washington was "wondering if it could any longer count on Turkey to help contain Iran's profound challenge to regional peace."
According to other papers, Erdogan lacks "vision" and "analytic depth", reads "minimally", ignores foreign ministry expertise and is guided by an "iron ring of sycophantic (but contemptuous) advisors... which partially explains...
his susceptibility to Islamist theories."

He is said to rely on "his charisma, instincts, and the filterings of advisors who pull conspiracy theories off the Web or are lost in neo-Ottoman Islamist fantasies, e.g., Islamist foreign policy advisor... Ahmet Davutoglu."

Davutoglu is currently Turkey's foreign minister, and is scheduled to meet later Monday with US Secretary of State Hillary Clinton as part of a previously scheduled visit to Washington.