Apologising to Turks for raid is legal risk - Israel 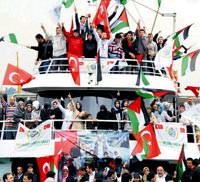 Israel should not apologise to Turkey for killing nine of its citizens aboard an aid ship that tried to breach the Gaza blockade, as this would invite international lawsuits, an Israeli official said on Friday.

(Reuters) - Speaking after the former allies sent envoys to discuss rapprochement, Deputy Foreign Minister Danny Ayalon reiterated Israel's stance that its marines acted in self-defence while storming the Mavi Marmara in May. He placed the onus on Ankara.
"It is important we reach a solution, but the solution certainly depends on the good intentions, if there are such, on the Turkish side," Ayalon told Israel Radio.

"We must not apologise as there are both moral-diplomatic ramifications and legal ramifications that can really expose IDF (Israel Defence Force) soldiers to lawsuits, damages claims against Israel and the like."

Turkey calls the pro-Palestinian activists who were shot during deck brawls "martyrs", and has demanded a formal apology and compensation. Turkish Prime Minister Tayyip Erdogan said on Tuesday that Israel must also stop blockading Hamas-ruled Gaza.

Israeli officials say the initial proposal made by Prime Minister Benjamin Netanyahu's envoy included an exprevssion of "regret" over the incident and agreement in principle to compensate the bereaved Turkish families with one-off payouts.

In return, Israel wants the Turks to help indemnify its military against lawsuits in international forums, and to normalise ties with steps like a new exchange of ambassadors.

Turkish Foreign Minister Ahmet Davutoglu on Thursday signalled no change in his government's position, saying "the citing of (compensation) figures of the matter of regret did not come onto the agenda".

But Ayalon played down prospects of an imminent dispute.

"I don't think he (Netanyahu) is coming with an official Israeli position right now, because it would not yet be the time to voice it. The contacts (with Turkey) are still ongoing intensively," he said.