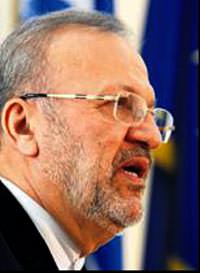 President Mahmoud Ahmadinejad fired Foreign Minister Manouchehr Mottaki on Monday and replaced him with his atomic chief, in an apparent falling out over policy as Iran holds talks with world powers over its nuclear programme.

The official IRNA news agency gave no reasons for the move, and reported that Ali Akbar Salehi, a vice-president and head of Iran's atomic energy organisation, would become caretaker foreign minister.

Mottaki, 57, a career diplomat who was appointed foreign minister in August 2005, is currently in Senegal on an official visit.

Earlier this month, at a security meeting in neighbouring Bahrain, Mottaki hailed as a "step forward" remarks by US Secretary of State Hillary Clinton that Iran is entitled to a peaceful nuclear energy programme.

Clinton had told the BBC that Tehran could enrich uranium for civilian purposes in the future, but only once it has demonstrated it can do so in a responsible manner and in accordance with Iran's international obligations.

Mottaki's comments appeared to cut across the Islamic republic's official position, repeated almost daily, that its enrichment of uranium is non-negotiable.

"I thank you and appreciate the work and the services you have rendered during your tenure in the foreign ministry," Ahmadinejad was quoted as telling Mottaki in a directive carried by IRNA on Monday.

It reported that Ahmadinejad also issued a separate directive appointing Salehi as the "caretaker of the foreign ministry."

"Due to your commitment, knowledge and valued expertise... you are appointed as caretaker of the foreign ministry," the directive read.

Under Iranian law, the president has to submit his nominations for ministerial posts to parliament for approval.

Clinton on Monday said it was Iran's policies, not who represents Tehran internationally, that matter most to Washington.

"Whether one person or another is foreign minister is not as important as to what (is) the policy of the Iranian government," she told reporters at a meeting with the foreign ministers of Canada and Mexico in a small town in Quebec.

Mottaki's sacking comes just days after Iran held crunch talks in Geneva on December 6 and 7 with world powers over its controversial nuclear dossier. Further talks are scheduled for next month in Iran's neighbour Turkey.

EU foreign policy chief Catherine Ashton, asked at a news conference in Brussels to comment on Mottaki's dismissal, said she has no inside knowledge of the move.

"I do expect the talks to take place in Istanbul in January," she added of the planned next round of the nuclear talks.

Salehi, 61, who was appointed atomic energy chief on July 17, 2009, has been a driving force behind Iran's atomic programme, and during his tenure, the country's first nuclear power plant has come on line.

Before taking up the post, he was deputy chief of the Jeddah-based Organisation of the Islamic Conference.

Salehi is a PhD graduate of the prestigious MIT in the United States.

He served as Tehran's representative in the Vienna-based International Atomic Energy Agency during the presidency of the reformist Mohammad Khatami.

Ahead of this month's talks in Geneva, Salehi, a fluent speaker of English and Arabic, announced that Iran had produced a first batch of uranium yellowcake, the raw material for enrichment.

He said that having previously been obliged to import yellowcake from abroad, Iran was now "self-sufficient" in the entire nuclear fuel cycle.

Mohammad Saleh Sedghian, director of the Arab Centre for Iranian Studies in Tehran, said he believed the falling out between Mottaki and Ahmadinejad may have resulted from a number of issues such as the "downgrading of ties with other nations."

"The foreign ministry was not comfortable about the downgrading of ties with some nations like Britain," Sedghian said of comments by several conservative MPs on Sunday who slammed British ambassador Simon Gass.

Gass criticised Iran's human rights record on his embassy website and called for the release of a prominent lawyer.

One prominent conservative MP said that the parliamentary foreign policy commission would next week examine downgrading ties with Britain.