UN calls on rival Cypriot leaders to be more positive 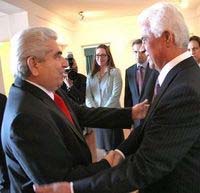 The UN Security Council called Tuesday for a new effort by Cyprus' rival communities to make a permanent peace accord as it renewed the mandate of the peacekeeping force on the divided island.

The Greek- and Turkish-Cypriot leaders must "intensify the momentum of negotiations and engage in the process in a constructive and open manner," said a Security Council resolution.
It called on them to "improve the public atmosphere" for negotiations by "delivering more constructive and harmonized messages."
President Demetris Christofias, head of the internationally recognized Greek-Cypriot government, and Turkish-Cypriot leader Dervis Eroglu, have stepped up their contacts since being warned last month by UN Secretary General Ban Ki-moon that the United Nations could end its latest attempt to mediate a reunification accord.
UN officials say there has been an improvement since then. Ban is to meet the two leaders in Geneva at the end of January to assess the progress.
The Mediterranean island split after Turkish troops invaded the northern third of Cyprus in 1974 in response to a Greek-Cypriot coup seeking union with Greece.
Only Turkey recognizes the northern administration and it has kept more than 35,000 troops in the sector.
The Security Council renewed the mandate of the 927 troops and police in the UN Peacekeeping Force in Cyprus for another six months until June 15, 2011. The force mainly patrols the unofficial border between the two communities.
UNITED NATIONS - (AFP)
Last Update: Dec 15, 2010 12:02 pm
RELATED TOPICS