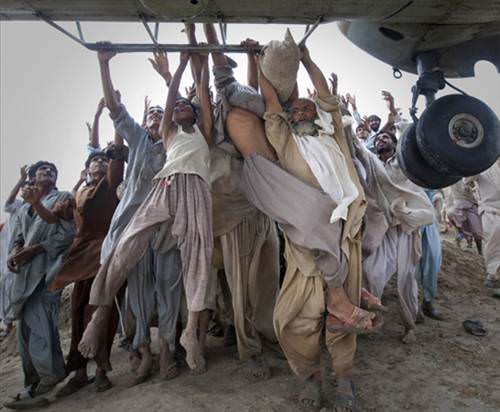 Earthquakes, heat waves, floods, volcanoes, super typhoons, blizzards, landslides and droughts killed at least a quarter million people in 2010 - the deadliest year in more than a generation. More people were killed worldwide by natural disasters this year than have been killed in terrorism attacks in the past 40 years combined.

This was the year the Earth struck back.

"It just seemed like it was back-to-back and it came in waves," said Craig Fugate, who heads the U.S. Federal Emergency Management Agency. It handled a record number of disasters in 2010.

"The term '100-year event' really lost its meaning this year."

And we have ourselves to blame most of the time, scientists and disaster experts say.

Even though many catastrophes have the ring of random chance, the hand of man made this a particularly deadly, costly, extreme and weird year for everything from wild weather to earthquakes.

Poor construction and development practices conspire to make earthquakes more deadly than they need be. More people live in poverty in vulnerable buildings in crowded cities. That means that when the ground shakes, the river breaches, or the tropical cyclone hits, more people die.

Disasters from the Earth, such as earthquakes and volcanoes "are pretty much constant," said Andreas Schraft, vice president of catastrophic perils for the Geneva-based insurance giant Swiss Re. "All the change that's made is man-made."

The January earthquake that killed well more than 220,000 people in Haiti is a perfect example. Port-au-Prince has nearly three times as many people - many of them living in poverty - and more poorly built shanties than it did 25 years ago. So had the same quake hit in 1985 instead of 2010, total deaths would have probably been in the 80,000 range, said Richard Olson, director of disaster risk reduction at Florida International University.

In February, an earthquake that was more than 500 times stronger than the one that struck Haiti hit an area of Chile that was less populated, better constructed, and not as poor. Chile's bigger quake caused fewer than 1,000 deaths.

In the summer, one weather system caused oppressive heat in Russia, while farther south it caused flooding in Pakistan that inundated 62,000 square miles, about the size of Wisconsin. That single heat-and-storm system killed almost 17,000 people, more people than all the worldwide airplane crashes in the past 15 years combined.

"It's a form of suicide, isn't it? We build houses that kill ourselves (in earthquakes). We build houses in flood zones that drown ourselves," said Roger Bilham, a professor of geological sciences at the University of Colorado. "It's our fault for not anticipating these things. You know, this is the Earth doing its thing."

No one had to tell a mask-wearing Vera Savinova how bad it could get. She is a 52-year-old administrator in a dental clinic who in August took refuge from Moscow's record heat, smog and wildfires.

"I think it is the end of the world," she said. "Our planet warns us against what would happen if we don't care about nature."

The excessive amount of extreme weather that dominated 2010 is a classic sign of man-made global warming that climate scientists have long warned about. They calculate that the killer Russian heat wave - setting a national record of 111 degrees - would happen once every 100,000 years without global warming.

Preliminary data show that 18 countries broke their records for the hottest day ever.

"These (weather) events would not have happened without global warming," said Kevin Trenberth, chief of climate analysis for the National Center for Atmospheric Research in Boulder, Colo.

That's why the people who study disasters for a living say it would be wrong to chalk 2010 up to just another bad year.

"The Earth strikes back in cahoots with bad human decision-making," said a weary Debarati Guha Sapir, director for the World Health Organization's Centre for Research on the Epidemiology of Disasters. "It's almost as if the policies, the government policies and development policies, are helping the Earth strike back instead of protecting from it. We've created conditions where the slightest thing the Earth does is really going to have a disproportionate impact."

Here's a quick tour of an anything but normal 2010:

While the Haitian earthquake, Russian heat wave, and Pakistani flooding were the biggest killers, deadly quakes also struck Chile, Turkey, China and Indonesia in one of the most active seismic years in decades. Through mid-December there have been 20 earthquakes of magnitude 7.0 or higher, compared to the normal 16. This year is tied for the most big quakes since 1970, but it is not a record. Nor is it a significantly above average year for the number of strong earthquakes, U.S. earthquake officials say.

Flooding alone this year killed more than 6,300 people in 59 nations through September, according to the World Health Organization. In the United States, 30 people died in the Nashville, Tenn., region in flooding. Inundated countries include China, Italy, India, Colombia and Chad. Super Typhoon Megi with winds of more than 200 mph devastated the Philippines and parts of China.

The last year in which natural disasters were this deadly was 1983 because of an Ethiopian drought and famine, according to WHO. Swiss Re calls it the deadliest since 1976.

The charity Oxfam says 21,000 of this year's disaster deaths are weather related.

The year may go down as the hottest on record worldwide or at the very least in the top three, according to the World Meteorological Organization. The average global temperature through the end of October was 58.53 degrees, a shade over the previous record of 2005, according to the National Climatic Data Center.

Los Angeles had its hottest day in recorded history on Sept. 27: 113 degrees. In May, 129 set a record for Pakistan and may have been the hottest temperature recorded in an inhabited location.

In the U.S. Southeast, the year began with freezes in Florida that had cold-blooded iguanas becoming comatose and falling off trees. Then it became the hottest summer on record for the region. As the year ended, unusually cold weather was back in force.

Northern Australia had the wettest May-October on record, while the southwestern part of that country had its driest spell on record. And parts of the Amazon River basin struck by drought hit their lowest water levels in recorded history.

Disasters caused $222 billion in economic losses in 2010 - more than Hong Kong's economy - according to Swiss Re. That's more than usual, but not a record, Schraft said. That's because this year's disasters often struck poor areas without heavy insurance, such as Haiti.

Ghulam Ali's three-bedroom, one-story house in northwestern Pakistan collapsed during the floods. To rebuild, he had to borrow 50,000 rupees ($583) from friends and family. It's what many Pakistanis earn in half a year.

A volcano in Iceland paralyzed air traffic for days in Europe, disrupting travel for more than 7 million people. Other volcanoes in the Congo, Guatemala, Ecuador, the Philippines and Indonesia sent people scurrying for safety. New York City had a rare tornado.

A nearly 2-pound hailstone that was 8 inches in diameter fell in South Dakota in July to set a U.S. record. The storm that produced it was one of seven declared disasters for that state this year.

There was not much snow to start the Winter Olympics in a relatively balmy Vancouver, British Columbia, while the U.S. East Coast was snowbound.

In a 24-hour period in October, Indonesia got the trifecta of terra terror: a deadly magnitude 7.7 earthquake, a tsunami that killed more than 500 people and a volcano that caused more than 390,000 people to flee. That's after flooding, landslides and more quakes killed hundreds earlier in the year.

Even the extremes were extreme. This year started with a good sized El Nino weather oscillation that causes all sorts of extremes worldwide. Then later in the year, the world got the mirror image weather system with a strong La Nina, which causes a different set of extremes. Having a year with both a strong El Nino and La Nina is unusual.

And in the United States, FEMA declared a record number of major disasters, 79 as of Dec. 14. The average year has 34.

A list of day-by-day disasters in 2010 compiled by the AP runs 64 printed pages long.

"The extremes are changed in an extreme fashion," said Greg Holland, director of the earth system laboratory at the National Center for Atmospheric Research.

For example, even though it sounds counterintuitive, global warming likely played a bit of a role in "Snowmageddon" earlier this year, Holland said. That's because with a warmer climate, there's more moisture in the air, which makes storms including blizzards, more intense, he said.

White House science adviser John Holdren said we should get used to climate disasters or do something about global warming: "The science is clear that we can expect more and more of these kinds of damaging events unless and until society's emissions of heat-trapping gases and particles are sharply reduced."

And that's just the "natural disasters." It was also a year of man-made technological catastrophes. BP's busted oil well caused 172 million gallons to gush into the Gulf of Mexico. Mining disasters - men trapped deep in the Earth - caused dozens of deaths in tragic collapses in West Virginia, China and New Zealand. The fortunate miners in Chile who survived 69 days underground provided the feel good story of the year.

In both technological and natural disasters, there's a common theme of "pushing the envelope," Olson said.

Colorado's Bilham said the world's population is moving into riskier megacities on fault zones and flood-prone areas. He figures that 400 million to 500 million people in the world live in large cities prone to major earthquakes.

A Haitian disaster will happen again, Bilham said: "It could be Algiers. it could be Tehran. It could be any one of a dozen cities."