Mullen: US `Very Ready' To Counter Iran On Nukes 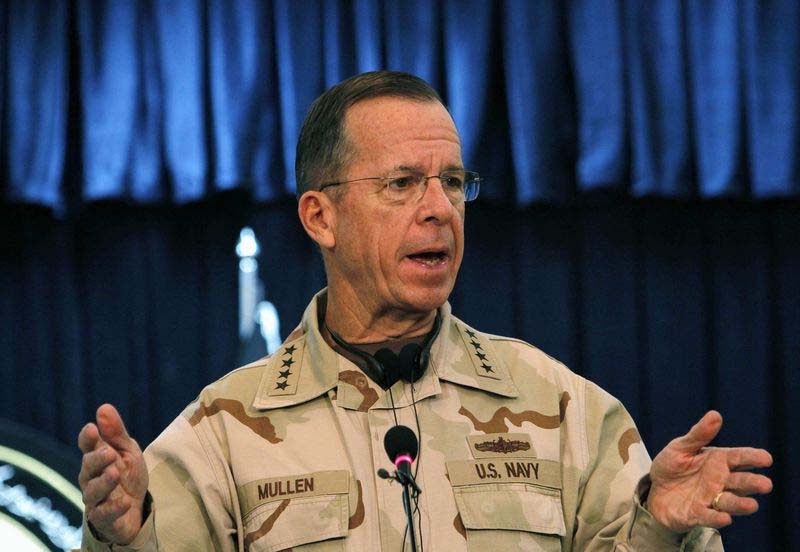 Iran is trying to build a nuclear bomb, posing a threat to its neighbors, and the United States is "very ready" to counter Iran should it make a move, the top U.S. military officer said Saturday.

Adm. Mike Mullen, chairman of the Joint Chiefs of Staff, sought to reassure Persian Gulf nations nervous that an increasingly militarized government in Iran might try to start a war.

"The United States takes very seriously our security commitments in the Gulf region," Mullen said following a meeting with Bahrain's king. Bahrain, directly across the Gulf from Iran, is home to a large U.S. Navy base that would be on the front lines of any war with Iran.

"We're very ready," Mullen said, an unusually direct acknowledgment that the United States has contingency plans to counter Iran should it make a move. "There are real threats to peace and stability here, and we've made no secrets of our concerns about Iran."

In Iran, the new foreign minister — and current nuclear chief — said Saturday that he wants to build the country's relationship with Saudi Arabia and strengthen ties with Turkey, China and Russia. The latter two countries have veto power on the U.N. Security Council that could help Iran as it tries to fend off tougher sanctions.

Iran denies it is seeking a nuclear weapon, and denies U.S. claims that it sponsors terrorists. Iran has wary relations with many of its neighbors, who are trading partners with the oil giant but distrust the theocratic government.

"Concerns about Iran's nuclear program are very real and inform a lot of the decision making" among Gulf nations, said Adam Ereli, the U.S. ambassador in Bahrain.

The U.S. fears that if Iran masters the technical challenge of building a bomb it could set off a nuclear arms race around the Gulf.

"From my perspective I see Iran continuing on this path to develop nuclear weapons, and I believe that that development and achieving that goal would be very destabilizing to the region," Mullen said.

He gave no specifics about U.S. plans or defenses, but the Navy base is headquarters for ships and aircraft that monitor Iran and could be used to deter or defend against what military officials fear would be an attack that would come without warning. The base also houses Patriot missiles.

The U.S. keeps tabs on Iran through extensive air surveillance in the Gulf and from naval patrols that regularly engage in formal communication with Iranian ships.

"I would like someday to think that they would be responsible regional and international players as opposed to what they are right now," Mullen added. "I just haven't seen any steps taken in that regard."

Mullen said he supports the current strategy of applying economic and political sanctions on Iran to try to dissuade it from building a bomb, while engaging Iran in international negotiations over the scope of its nuclear program. Iran claims it is seeking nuclear energy.

Mullen repeated his view that a pre-emptive military strike on Iran's known nuclear facilities is a bad option that would set off "unintended consequences," but one the United States reserves the right to use. The Obama administration has said it will not allow Iran to become a nuclear weapons state but has never said exactly what steps it would take to prevent that.

The Obama administration and its European allies are prepared to impose additional sanctions if Iran fails to meet international demands to prove that its nuclear program is peaceful, a senior U.S. official said Friday.

Gary Samore, the White House coordinator for arms control, told a Washington think tank that the U.S. and its partners will keep up pressure on Iran to come clean about its nuclear ambitions.

Leaders of six U.S.-allied Gulf Arab nations said this month they are watching Iran's nuclear ambitions with "utmost concern," and appealed to the West for a greater voice in the renewed talks with Tehran.

The statement from the Gulf Cooperation Council — powerful Saudi Arabia and its fast-growing neighbors — appeared to cast off a bit of the group's traditional caution and adopt a harder tone. The group warned Iran not to interfere in Gulf Arab affairs and called on it to reject "force or the threat to use it."

Iran holds frequent military drills along the Persian Gulf — primarily to assert an ability to defend against any U.S. or Israeli attack on its nuclear sites, but also to send a message to Arab neighbors on its southern border.

by The Associated Press