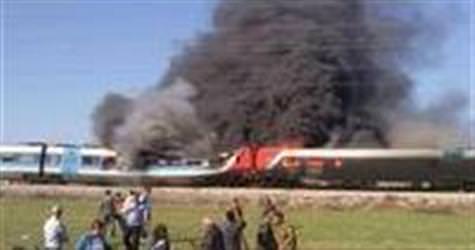 The train carrying 400 passengers was brought to a halt after the blaze engulfed three of its carriages near Kibbutz Shfaim, close to Netanya city, about 15 kilometres (nine miles) from Tel Aviv.
"Forty-eight passengers have been hospitalised, nearly all of them suffering from minor injuries due to smoke inhalation or broken windows," an emergency services spokesman told AFP, adding four had suffered serious injuries.
Witnesses said a policeman travelling on board shot out windows to provide ways of escape from the burning train and that some of the injuries were caused as fleeing passengers scrambled over broken glass.
Police spokesman Micky Rosenfeld told AFP an "investigation was opened to determine the cause of the fire," while indicating police investigators believed it was the result of an accident.
Israeli army radio said that there was "a growing belief that the fire broke out after an electrical short-circuit."
KIBBUTZ SHFAIM, Israel, (AFP)
Last Update: Dec 28, 2010 3:02 pm
RELATED TOPICS