A new balloon from Wikileaks 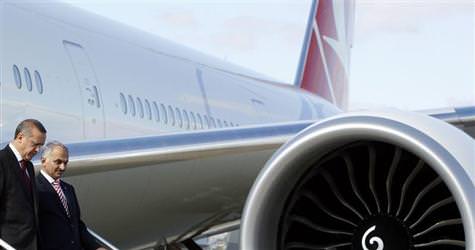 Having already released a number of unfounded accusations regarding Turkish leaders, this time documents offered up by the Wikileaks website claims Turkey attempted to bargain the purchase of 20 Boeing aircraft with sending a Turkish astronaut into space.

As Wikileaks continues to release confidential documents on their infamous website, new interesting accusations regarding Turkey have also managed to surface. The website, which has already released a number of groundless claims regarding Turkish state leaders, yesterday released US diplomatic documents containing allegations that in exchange for the purchase of 20 American Boeing passenger planes, a request was made of the United States for a Turkish astronaut to be sent into space. According to documents published by the New York Times, during a meeting between Minister of Transportation Binali Yıldırım and then U.S. Ambassador to Ankara James F. Jeffrey on January of 2010, a suggestion was made by Turkey for NASA to include a Turkish astronaut in a future flight in return for Turkish Airlines (THY) purchase of 20 Boeing passenger planes.
'A VAGUE REQUEST'
According to the documents, Minister Yıldırım relayed to Ambassador Jeffrey a request made by President Abdullah Gül to United States President Barack Obama for assistance by the U.S. for Turkey's space program as well as for the Federal Aviation Administration (FAA) to provide support for the improved safety of Turkey's aviation.
Jeffrey's response was, "We probably cannot put a Turkish astronaut in orbit, but there are programs we could undertake to strengthen Turkey's capacity in this area that would meet our own goals for improved aviation safety," he wrote. "In any case, we must show some response to the minister's vague request if we want to maximize chances for the sale."
'BASELESS ALLEGATIONS'
Meanwhile, the response in Ankara to this most recent Wikileaks claim is, "It is quite unfounded gossip." Documents released also allege that that there was an arduous battle between France and the United States regarding the 2007 sale of a passenger plane to Bahrein. In exchange for the purchase of the Boeing jet, a promise was supposedly made for George W. Bush to pay a visit to the country in January of 2008. Another document claims that Saudi King Abdullah requested his private plane be fitted out with the same technology existent in the US President's Air Force One aircraft in exchange for a Boeing purchase. The State Deportment has supposedly already approved of the 'upgrade.'