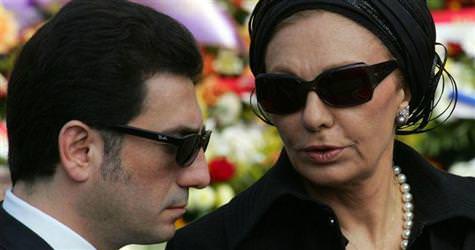 The youngest son of the late shah of Iran was found dead Tuesday of an apparent suicide at his home in Boston, after he had "struggled for years to overcome his sorrow," his brother said.

"Once again, we are joined with mothers, father and relatives of so many victims of these dark times for our country," the shah's oldest son, Reza Pahlavi, wrote on his website in announcing the death of his brother, Alireza Pahlavi.

Pahlavi, 44, died from a gunshot wound that apparently was self-inflicted, said Jake Wark, a spokesman for the Suffolk district attorney's office.

Boston police said officers responding to a 911 call found the man dead in his home in the city's South End neighborhood shortly after 2 a.m. Tuesday. A police spokesman did not know who made the call or whether it came from the home.

Fardia Pars, who is close to Reza Pahlavi, said by phone from Paris that Alireza Pahlavi went into a deep depression following the 2001 death of his sister Leila Pahlavi, who was found in a London hotel room at age 31 after overdosing on barbiturates.

"He became a different person," he said.

Pahlavi's depression "grew over time - his departure from Iran, living in exile, the death of his father and then his sister to whom he was very close," said Nazie Eftekhari, who works in Reza Pahlavi's office in Washington and is a close family friend.

"The deaths were a huge blow to him," she said.

When Leila Pahlavi died, her mother said her daughter had been "very depressed." Her doctor had said she had a history of anorexia, bulimia and psychological problems.

Pars said Alireza Pahlavi's style even in taking his life was militaristic in nature, reflecting his royal background.

"Like an army commander, he shot himself. He was a very disciplined man," Pars said.

Former Shah Mohammad Reza Pahlavi was overthrown in the 1979 Islamic revolution. He fled Iran and wandered from country to country, ill with cancer, and eventually died in Egypt in 1980.

Alireza Pahlavi was born in Tehran in 1966 and attended school there until 1979, according to a brief biographical sketch on the website of his mother, the former empress Farah Pahlavi.

From 1979 to 1981, Alireza Pahlavi attended schools in New York and Cairo, and from 1981 to 1984 he attended Mount Greylock Regional High School in Williamstown, Mass.

Pahlavi studied music as an undergraduate at Princeton University and ancient Iranian studies as a graduate student at Columbia University.

He also did postgraduate work at Harvard University in ancient Iranian studies and philology. He was not studying at the university at the time of his death, a Harvard spokesman said Tuesday.

A police officer was seen late Tuesday afternoon going in and out of Pahlavi's Boston apartment and speaking with family representatives, who would not talk to reporters.

A neighbor, Dan Phillips, said he did not know Pahlavi personally but recognized his picture and described him as someone who was very sociable and "who always dressed very dapper."

"I would always see him walking around here, and he used to wear blue jeans and a blazer," Phillips said.

Trita Parsi, the president of the National Iranian American Council, said in a statement that "the Iranian-American community was deeply saddened" by news of the death.

"There are many divisions in the community, but on a day like this, I think we are all united in our sympathy with the Pahlavi family for their tragic and painful loss," Parsi said.

Reza Pahlavi, who property tax records show lives in Potomac, Md., in Montgomery County, a suburb of Washington, D.C., has spoken out in opposition to Iran's clerical regime. It's not clear how much weight exiled opposition forces have inside Iran nor how many Iranians support the idea of a return to monarchy. Pahlavi said in 2009 that that is not his goal.

"I'm not here to advocate anything but ... freedom and democracy for the Iranian people at first, and I've determined this as my unique mission in life," he said at the time.

Pahlavi will head to Boston on Wednesday, Eftekhari said, and she expected his mother, who's in Paris, to go as well.

Eftekhari said the family asks to be allowed to mourn privately for a few days and no funeral arrangements have been made.